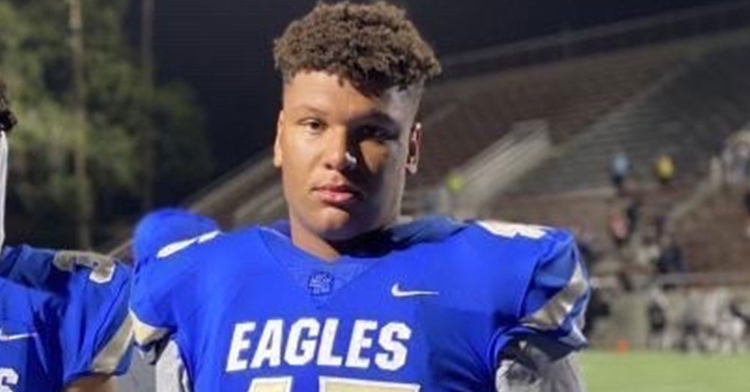 Clemson’s guest list for visits and camps have been filled with four and five-star prospects over the past week. One of the most sought-after recruits in the 2022 class made a stop to camp and compete in front of the Clemson staff, even with a Clemson offer already in hand.

Hero Kanu has been making stops at college campuses as a part of a tour with PPI Recruits, a recruiting database and placement program for International American football players. The 6-5, 293-pound defensive tackle is originally from Germany and is now attending Santa Margarita Catholic (CA), where he has seen his recruitment take off with over 20 major offers pouring in. Kanu’s offer list includes Clemson, Alabama, Ohio State, Florida State, and Georgia, and the 4-star recruit was on campus at Clemson last week to learn about the campus and learn more from the Tigers’ defensive staff.

Some of Kanu’s summer tour has included camps at Georgia, Clemson, Alabama, and Ohio State. Kanu’s trip to Clemson came on June 2nd, and Kanu had the chance to check out the Clemson facilities and get coached up by the Clemson staff and players.

“We got to talk to the coaches and see the facility. The whole campus is pretty big,” Kanu told TigerNet about his Clemson visit. “It’s a college town, the whole town is about the university. It’s really nice. I got to finally meet Coach (Todd) Bates in person and that was really nice. He’s a nice man. I really like him and I’m looking forward to seeing him again. He taught me a lot at the camp. There was also great competition there. At the end of the camp I met up with Coach (Brent) Venables. It was great to talk to him and we took a picture, of course. The players are all big. And Bryan Bresee, I had to take a picture with him after!”

Kanu camped at Georgia the day before his Clemson visit, with those schools being Kanu’s first opportunity to see a college campus and football facilities in person.

“We toured both schools, and both have great facilities. That was really impressive,” Kanu said of his first stops at Georgia and Clemson. “With Clemson, it’s just the atmosphere. Everything seemed so clean, and there’s a fresh energy that I could just feel. I had a lot of energy as soon as I stepped on-campus and at the facility.”

Kanu connected with Todd Bates at camp and used that time to refine his game heading into his senior season.

“He just corrected everything, especially my pass-rushing moves,” Kanu said of Bates. “He’s all about the details. It’s great to have somebody that can help you out with that and show you your weaknesses and show you how to do it better. And the players were also coaching, so I got to hear everything from a player’s perspective.”

Kanu’s Clemson offer came back in March on a phone call with the Clemson defensive staff. Brent Venables was on that call, and Kanu had the chance to catch up with Venables after camp.

“We were in contact before, and he was there when I got the offer from Clemson. It was really nice to finally see him in-person,” he said. “We talked about everything and about the camp. I’m also looking forward to seeing him again.”

Kanu stated in an earlier interview with TigerNet that he is looking at the stability, development, and culture in the right school. Kanu said after the Clemson visit that he feels Clemson checks the boxes for what he is looking for in a school so far. Kanu did not get the chance to talk to head coach Dabo Swinney during the visit, but he is excited about returning to Clemson and meeting the Tigers’ head coach.

Kanu is currently listed as a 4-star prospect and the No. 99 player overall in the 247Sports rankings for the ’22 class.