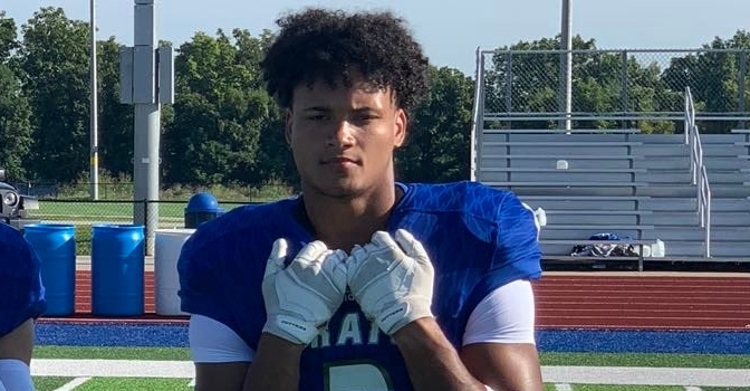 Wesolak plans to visit for Swinney's camp in June.

After picking up a Clemson offer in February, Boonville (MO) four-star defensive end DJ Wesolak included Clemson in his top schools list in April. The Tigers are hoping to secure another major defensive line prospect to add to their arsenal, and the Elite Retreat (June 12-13) will give them a chance to host one of their major targets.

Wesolak is currently listed as the No. 176 player in the nation and the No. 10 weakside defensive end in the 247Sports Composite rankings. At 6-4, 240-pounds, Wesolak has been recruited by defensive ends coach Lemanski Hall and defensive coordinator Brent Venables to come in and contribute in multiple ways. Clemson will get a chance to host the athletic defensive prospect on June 12th, and Wesolak is eager to meet the staff in-person.

“Basically me and coach Venables, coach Hall, coach Bates, the whole defensive staff, and coach Swinney will all just get together and talk. Coach Venables hits me up every other day and me and coach Hall talk every day.” Wesolak told TigerNet of his Clemson recruitment. “I will shoot them tape of me working out and they will give me advice. I’m just going through the process and I can’t wait to get out there for the Elite Retreat. Everything is really good with them. Cade (Klubnik) has been recruiting me to come there and play with him. I’m getting familiar with the guys already there and the guys committed.”

Wesolak will get a chance to meet up with another Missouri prospect and Clemson target in the ’22 class. Four-star cornerback Toriano Pride will also be in attendance at the Elite Retreat, and Wesolak has talked with Pride and other recruits about possibly teaming up in Clemson.

“There’s two players that I’m really close with in this process. Toriano Pride, he’s from St. Louis and that’s only an hour away from me. That’s my boy,” Wesolak said. “We’ve been really close in this process. And Jihaad Campbell out of IMG. We interact with each other and keep everything straight forward with what we think of the process. Those are guys I could see myself teaming up with.”

Wesolak has official visits planned to USC and Miami in late-June, with the Clemson visit coming during a trio of unofficial visits that also includes Georgia and UNC.

“Seeing coach Dabo, coach Hall, coach Venables, and coach Bates all at the same time will help,” Wesolak said of the Clemson visit. “I have some friends in the recruiting process that’s coming out there. I know some of them are thinking about committing when we get out there. With some of us not being able to take visits, it just helps us so much to see what it is really like to be a college athlete and being around the college environment and culture. Just to see a great team and program and being able to see their success. Being at Clemson for a couple of days is really going to help.”

Wesolak recently released a list of 15 top schools in April, but Penn State and Florida State have also emerged as additional teams that Wesolak has built a strong bond with. Wesolak said that a commitment could come during the summer, but he could be ready to commit if a school feels like home.

“I know I said last time it would be more around December, but with visits opening up I could possibly commit on the day of a visit of I love it and it feels like home,” he said. “Or maybe some time in the late summer. Everything I want to see from each campus is their culture and environment. I want to see how the schools coach their players up and how their players react. Everyone knows Clemson has a great culture. Not just as an athletic school, but just the support all through the town.”

Wesolak said that the Clemson staff is one of the schools that is standing out with building a relationship with him, also naming Arizona State, Penn State, Texas, Alabama, and Oregon as schools that have remained in strong contact.