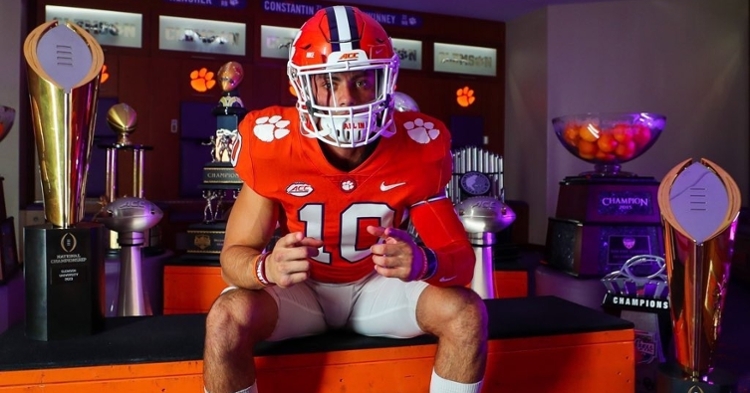 Stellato has been a main target at wide receiver.

The offensive recruiting class assembled by the Clemson coaches for the 2021 cycle is already impressive, but there is more to come.

In a story we posted Wednesday, we took a look at a few of the remaining defensive targets. In this edition we look at the offense.

The Tigers have 13 commitments already for this cycle, which means an expected class of 18-20 is already starting to fill. When it comes to the offensive skill guys, Clemson is well on its way to filling its quota.

We will start with the quarterback spot. Clemson has typically gone with the one quarterback per year strategy, and that has worked out well for them. When you look at Clemson’s quarterback recruiting over the last half-decade or so, it’s been about going into Georgia (Chase Brice, Deshaun Watson, Trevor Lawrence) and getting a highly-ranked guy while continuing to look elsewhere. That led then to Connecticut (Taisun Phommachanh) and California (DJ Uiagalelei) to land the two players who are expected to battle to replace Lawrence when the time comes.

Clemson went after highly-rated Caleb Williams early, but after trimmed the Tigers from his top group, Brandon Streeter once again started fishing in Georgia and came up with a Bulldog commit – a baseball commit – in Bubba Chandler. Once Streeter and the Tigers offered Chandler it was just a matter of time before he committed, and he did a few weeks ago. Unless there is unexpected attrition at the spot this year, Chandler is it for this cycle.

At running back, Tony Elliott saw the two players he wanted at Dabo Swinney’s camp last June and offered those two players – Phil Mafah and Will Shipley. Shipley and Mafah are different types of runners and figure to be a dynamic duo for years to come. They also complete the class at the tailback spot.

At wide receiver, my expectation has been that Clemson would land three, and two are already in the fold (as much as they can be) in Beaux Collins (Uiagalelei’s teammate in Cali) and Dacari Collins out of Atlanta (GA) Westlake. That leaves one spot to fill, and Clemson is going all in on 4-star Troy Stellato out of Fort Lauderdale (FL) Cardinal Gibbons. It’s interesting to note that Clemson has offered just seven receivers this cycle. Compare that to arch-rival South Carolina, which has offered 40.

“There has been a lot of talking and lot of communicating with coaches. They have been really trying to extend the olive branch a lot and open up the communication,” Stellato told TigerNet. “I know I came out with a top-two and everything, but I have been communicating with Coach (Brian) Hartline at Ohio State and also Coach (Tyler) Grisham at Clemson. I have been building relationships for sure, but it's a weird time right now but there isn't much you can do about it...I was supposed to visit LSU, Notre Dame, and USC but obviously, due to the coronavirus, none of that was possible.”

At tight end, the Tigers closed the class early with the addition of 4-star Jake Briningstool out of Brentwood (TN) Ravenwood. The first time I saw Briningstool, I wrote down “Drago” on my notepad, as in Captain Ivan Drago from the Rocky movies.

There is a little more drama along the offensive line.

As of now, the primary targets are 5-star Warwick (PA) Lititz tackle Nolan Rucci and 4-star Fairfax (VA) Robinson’s Tristan Leigh. The Tigers could take just one at that spot or they could take two. It’s my belief that three is the minimum along the line, and four is the maximum.

I spoke to Rucci a few weeks ago and he had this to say.

“I’d say Clemson is pretty high up on the list,” Rucci said. “They’ve been recruiting me pretty hard the past few months. They were one of the visits I actually got to take this spring. I always appreciate spending time with the staff.”

Spending time right now means FaceTime, Zoom conferencing, phone calls and text messages. Rucci said not a day goes by that he’s not locked down with some coaching staff in one form or another. Clemson rings him up regularly.

“Obviously I’ve been in close contact with coach Caldwell in the past few weeks,” Rucci said. “Actually got a chance to sit down with the family and get on FaceTime with Coach Swinney in the last week. That was a really cool experience. We’ve met in person a few times but it was just cool to get another opportunity to sit down with him and talk.”

The message Rucci continues to receive from Swinney and Caldwell is pretty simple.

“I’m a really good fit for their program, not only as a player but as a person,” Rucci said. “Coach Caldwell is such a great dude. I could just sit down and talk to him for hours, not just about football, but about fishing and anything in between. So, I’m just sitting down and having those conversations at this time, and how it would work if I were there.”

Rucci, of course, has offers from coast-to-coast. Some of the others on the list are Notre Dame, Georgia, Michigan, Miami, Stanford, Texas A&M, LSU, Alabama, Florida, Washington, Oklahoma, Arizona State and Oregon.

“I hope we have that opportunity some time this summer at least to get out and see these schools,” he said. “I would like to make a decision if everything works out ideally before the season, have a school in mind and maybe commit somewhere. But with this virus, it’s really up in the air.”