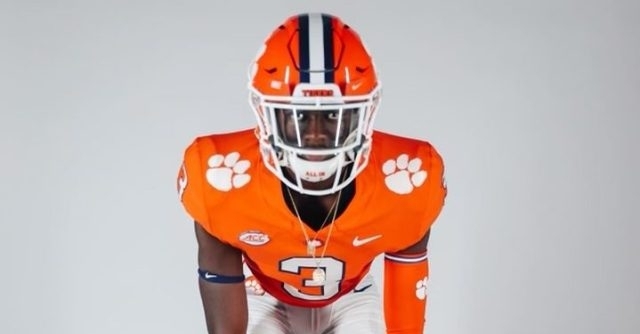 Webb will be back on campus in early June.

Clemson was the first major program to offer safety prospect Kylen Webb, and that offer has helped the Tigers stay at the top of Webb’s list.

A 2023 4-star athlete out of Riverview (FL) Sumner, Webb is one of the top recruits in not just talent-rich Florida but also nationally. He is ranked as the No. 26 athlete in the nation according to 247Sports as well as the No. 57 recruit in Florida, regardless of position.

Webb was a standout at Sumner and played safety and running back. On offense, he had 426 rushing yards and seven touchdowns. As a defensive back, he had 19 tackles and two interceptions.

Clemson offered Webb during a March visit to campus and others have followed – he has offers from Florida St., Georgia Tech, Pitt, Indiana, and Rutgers, among others.

Safeties coach Mickey Conn gave the offer and the two have been building their relationship.

“I feel like me and Coach Conn's relationship has gotten a lot better,” Webb said. “We check in with each other on the phone several times. He always texts me and asks me how my week is going, asks about any plans I have. We're really forming a relationship outside of football. He recently came to my school as well.”

“It's been blessing. After the Clemson offer, things really started taking off in the recruiting process,” Webb said. “I wouldn't say hectic, but it's been increasing. More coaches have been contacting me and texting me. I'm really just enjoying the recruiting process and it has really taken off over the last couple months and weeks.”

Which schools are recruiting him the hardest?

“Clemson is recruiting me pretty hard. Florida State, UCF and Wake Forest are probably recruiting me the hardest right now,” Webb said. “Coach Conn tells me how he would use me on the defense. With my reaction time off the ball, he feels like I can be an impact right away especially considering Clemson plays so many DBs on the field. He explained that without a doubt I can be one of the six DBs on the field making plays right away.”

Webb plans to make an official visit to Clemson June 3rd and detailed what he wants to see and do.

“I'd say after June after I take my visits,” Webb said. “Right now, I've got visits to Clemson, Florida State, UCF and Pitt.”

Webb said there are more than a few reasons on why Clemson stays in the hunt.

“How heavy they are on me and showing how bad they want me really stands out from other schools,” he said. “They've been heavy on me and saw something in me before the recruiting process really took off before everybody else kind of hopped on the train.”