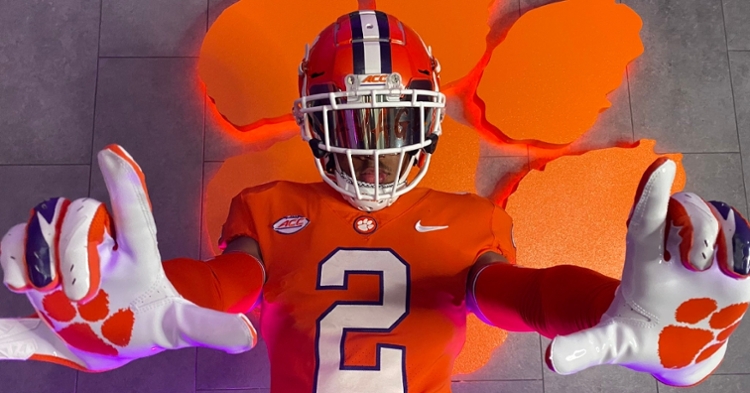 AJ Harris is currently listed as the No. 2 cornerback and the No. 23 player overall in the ’23 class by the 247Sports Composite rankings. The 5-star from Glenwood School (AL) Phenix City is listed at 6-2, 180 pounds, and his versatility and athleticism has drawn offers from all over the country. Harris has collected them from over 30 programs, and his visit to Clemson on June 4th ended with another offer to add to his collection. The visit to Clemson was the first recruiting trip in a busy summer for Harris, and the Tigers left a lasting impression on the 5-star corner.

Harris’ recruitment has been handled primarily by defensive backs coach Mike Reed. Once Harris arrived on the Clemson campus, Reed made sure that Harris felt like a priority.

“It was just amazing, just the fact that coach Reed stayed with me for like the whole visit. There’s other people there that he could talk to, but he stayed there and talked to me and Ethan (Nation) the whole time,” Harris told TigerNet. “He was just showing is what they had to offer academically and athletically. The best of both worlds, truly. Duke and Northwestern are top-tier in academics, but Clemson is up there as well. But the difference in those schools and Clemson is that Clemson competes for a national championship every other year. It was just amazing that I would get the opportunity to get a top-tier education and also the opportunity to compete for a national championship."

Harris said that the major factors in his recruitment will be a stable coaching staff and a family atmosphere, and Clemson seems to be in a good positon to be a serious contender for the 5-star.

“There were a few things that stood out to me, but the PAW Journey was amazing,” Harris said of the Clemson visit. “Just seeing how they get their young student-athletes to do productive things in this world. That is something that is big for me and my parents, because it’s bigger than just football. And the culture was amazing. They emphasize family a lot, and everybody was very friendly.”

Harris said that he plans on coming back to Clemson for a game this season, and that he could potentially release a top schools list after his visits this summer. Harris will see Clemson, Alabama, Georgia, Notre Dame, Ohio State, Virginia Tech, South Carolina, Florida, and potentially others over the course of the upcoming months.

At 6-2, Harris has the size and speed to contribute at multiple positions in the secondary. What makes Harris one of the top prospects in the ’23 class?

“I believe my strength is my versatility. I can play anywhere on the back end,” he said. “I’m a physical corner that can come down and hit, and I believe I do anything to help my team win. Coaches like my mentality and how I approach everything. I’m very technical to be a long DB. I have a technique about my play style.”

Harris is all about giving back away from football, and he said that the culture at Clemson feels like it would be a very good fit for him. What else is Harris liking about Clemson from his recruitment?

“I like how the coaching staff seems to be very stable. I know coach (Brent) Venables has had the chance to go other places, just because he’s such a great defensive coordinator. And with coach Reed being so consistent and producing DBs, I know he’s had the chance too. So it’s nice to see that they are staying. I like the stable coaching staff and them producing DBs with AJ Terrell and Andrew Booth coming up.”

Harris said that he has built good relationships with Ohio State head coach Ryan Day and defensive coordinator Kerry Coombs, as well as the staffs at Georgia, Virginia Tech, and Alabama.

WOW... AFTER A GREAT VISIT AND GENUINE CONVERSATION WITH @CUCoachReed IM BEYOND BLESSED TO EARN AN OFFER FROM CLEMSON UNIVERSITY!!!DIFFERENT.. #ALLIN ?????? pic.twitter.com/SIbGspA7uR