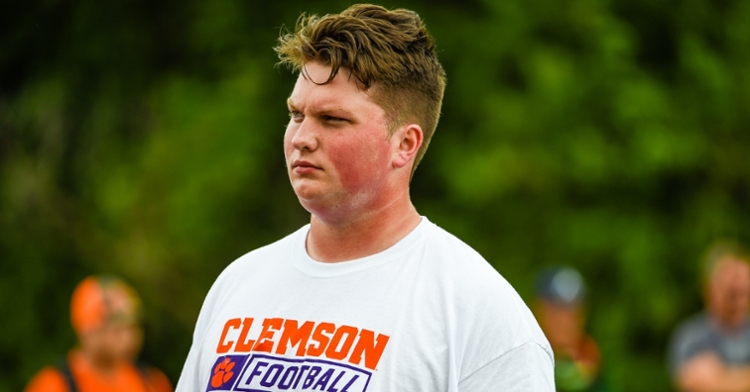 There are times when a commitment catches the Clemson coaches by surprise, and that was the case Wednesday when 4-star offensive lineman Blake Miller of Strongsville (OH) called offensive line coach Robbie Caldwell.

Miller is the first commitment for the Tigers in the 2022 recruiting cycle.

“I was talking to Coach Swinney, and he said something that really stood out to me,” Miller told TigerNet Wednesday evening. “He said, ‘When you know, you know. When you pick a school and you know, you know. I released the top schools I was looking at and when I listed everything that I wanted in a school, Clemson came out on top.”

Miller said more than one thing stood out about Clemson.

“Clemson has it going on right now,” he said. “Obviously, they’re definitely a very, very strong program. And then you can tell that they really care about their players. They look at it from a family aspect at Clemson which, to me, is really awesome. The whole town down there eats, breathes, and sleeps college football.”

Once the decision was made, Miller called Caldwell.

“They were obviously surprised, but they were ecstatic,” Miller said. “They were happy to have me on board. And I love Coach Caldwell. It’s obvious that he knows his stuff. I watched the game against Georgia Tech and you can tell those guys are well-coached and he really cares about his players. And Coach Swinney is just a genuine, down-to-earth guy. If you sit down to talk to him you really wouldn’t know that he was the head coach of this super successful program. Clemson just has this great culture.”

As the first commitment for the 2022 class, Miller knows it’s on him to help round the class into shape.

“I know it’s on me to start talking to some of these other guys in my class,” Miller said. “I can’t wait to get started.”

His Ohio high school football season ended a few weeks ago, but he’s thankful he had the chance to play.

“We had a six-week season, and it’s already over,” he said. “But I am just thankful we had the chance to play. I know a lot of guys that haven’t even gotten to play or had their seasons canceled. I am just glad I got to play those games.”