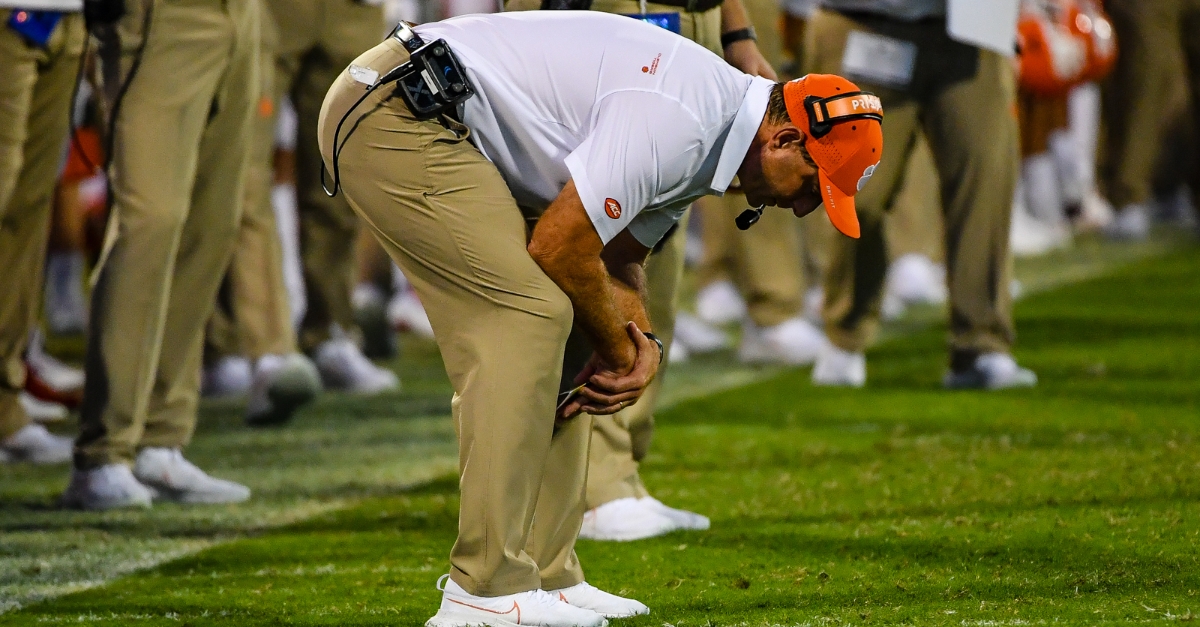 Will the Clemson offense look a little different today?

There is no doubt that the offense has been the proverbial problem child early in the season, and we’ve gone over all the numbers and the struggles ad nauseum. When someone asks me what I think the problem is, they already have formed an opinion and are all too ready to name their particular favorite issue.

I’ve tried to gauge the mentality inside the football building this week, but there hasn’t been a lot of talk. There have been snippets here and there, and one former player told me he thinks that things need to be simplified for the wide receivers, something that both Tony Elliott and Dabo Swinney have hinted at.

I will attempt to break down a play call for you, and this is a play call that you would typically see in a high school offense. And each word in the play call means something to different parts of the offense.

The play call we will use as an example is Dubs H Cross Eagles S Sneak. You first have a formation tag (Dubs, or two wides on each side), Motion (H Cross), Eagles (names the routes the receivers run), and S Sneak (tags the running back on which route to run).

In college, the playcall is a little different, and wide receivers run what are called choice routes in that they have a “choice” on which route they run based off of what they see from the defense. So the 9-man (boundary receiver) might come out and he sees man-to-man on the outside and thinks he has to run a go route. But the quarterback might see it a little different, and he thinks he sees two high safeties and wants to throw the slant. The quarterback drops back, expects the slant to be there, and instead the wide receiver is running down the sideline.

(NOTE: Back in my day of covering some really good 1-AA football back in the day, a favorite playcall was “686 Pump F-Stop.”

686: The first three numbers are the passing routes that the receivers — known as X, Y, and Z — should take. Every team numbers its pass routes and patterns, giving receivers an immediate signal of what routes to run. On this play, the X receiver runs a 6 route, the Y receiver an 8 route, and the Z receiver another 6 route. F-Stop: Refers to the fullback’s pass route.)

That is an extreme example, but it’s part of what we’ve been hearing about communication between the quarterbacks and receivers. So this week, will we see things simplified? It would slow down the offense because each receiver would be told a route concept – as above – and then the onus would be on the coaches to read the defense and check into a different concept based on what they see. This might be an interesting week to see if the players look back to the sidelines multiple times.

Defensively, this week is all about replacing Tyler Davis and Bryan Bresee in the middle. Ruke Orhorhoro has been good so far this season (and he’s a fantastic interview), but there isn’t a lot of experience behind him. That’s why we saw Justin Foster inside at times last week. I’ve wondered – just wondered and not heard anything – if Venables would go to a three-man front a little more this week and rely on the depth he has at linebacker.

It would something different to throw at Boston College and quarterback Dennis Grosel. Venables used multiple looks against Grosel two years ago in Death Valley and confused him all night. Could we see more of that?

Yes, everybody wants to see execution and enjoy football in the Valley, but the chess match between the opposing coaches is always an interesting game to watch, at least to me. Will the Tigers use more motion and eye candy? Will the route concepts change? Will DJ get more playcalls where he moves out of the pocket? Because his throw on the run last week at NC State was a thing of beauty, and I can see where a few more boot (running bootleg) concepts would help. And then the defense – watching Venables is always a treat.

Oh, and have fun at Homecoming.