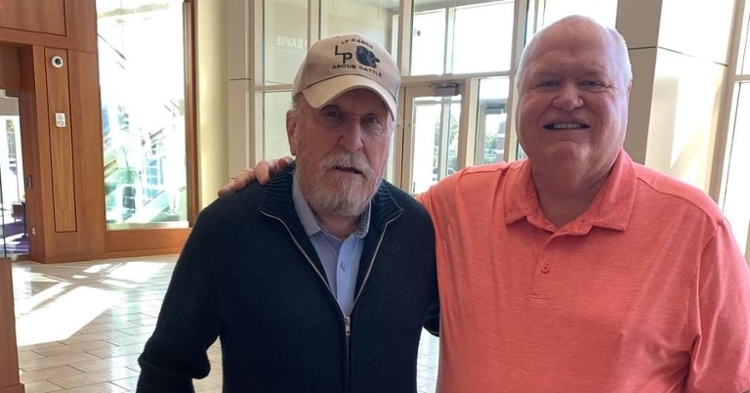 Welcome to the final home game of the season, a game that will go a long way toward determining the ACC Atlantic Division Champion.

Clemson and Wake Forest kick it off at noon today in Death Valley (ESPN), and as you all know, the Demon Deacons can win the Atlantic with a win. A loss and they will have to go on the road and beat Boston College next week to seal the title. However, if Wake loses both games and NC State loses one of its final two, the Tigers will find themselves in Charlotte yet again. That’s a longshot, but at least it’s possible.

There will be a special visitor on hand for the proceedings – actor Robert Duvall. The soon-to-be 90-year old is the recipient of an Academy Award, four Golden Globe Awards, a BAFTA Award, two Primetime Emmy Awards, and a Screen Actors Guild Award.

What role he’s best-known for really depends on who you talk to – some remember him as Boo Radley in To Kill a Mockingbird, while someone like me remembers him as Augustus “Gus” McCrae in the Lonesome Dove miniseries. There are dozens of other movies where he played a major part, from The Godfather, Part II to Secondhand Lions to The Great Santini to Days of Thunder to Open Range.

The word I received was that head coach Dabo Swinney did a favor for the Robert Duvall Children’s Fund, and later found that Duvall is not only a fan of Swinney’s, he’s a big fan of the Tigers. Duvall made it known that he wanted to come to a game, so he arrived Friday and took part in the walk-thru at the stadium and spent time with the players and coaches and toured the facilities.

So, if you look close, you might get a glimpse of Duvall today.

I think Swinney is correct when he says the days are long but the years are short. It seems like yesterday that I was counting down the days until the ACC Football Kickoff and preparing for the season. It looked like we were going to have a more normal football season, the fans would be back in their seats, and the Tigers would once again march triumphantly into the playoffs.

Instead, this has been a season of injury, of questions, and of doubt. And it’s flown by. I had someone text me in mid-October, as the injuries began to mount, and tell me that what was needed was a big reset button. That hit home – this has been a year unlike any other, especially when it comes to injuries, and it’s seen the Clemson program struggle, almost reminiscent of the 2010 season. And it’s interesting because even though we say the program is struggling, the Tigers still have a 7-3 record and can put together another 10-win season if they win out.

But this isn’t the Clemson team we are used to seeing, and the offensive struggles have been staggering. One reader emailed us here at TigerNet Thursday saying they needed a way to contact “Sweeney” and that they were “tired of losing.” And, as I said, that while this isn’t the offense we are used to seeing, a lot of programs out there would love to be “losing” their way to a 7-3 record. And we’ll have an entire offseason to look back at this season and also look ahead to next season.

For now, however, there is the sadness (at least for me) of a last home game. Even for somebody that works on gameday (works, haha), these days are special. Like Swinney says, we only get a few of these opportunities per year and we pine for them for months. So go out and enjoy Senior Day and your tailgating and being with friends, and be on the lookout for somebody that likes the smell of napalm in the morning.