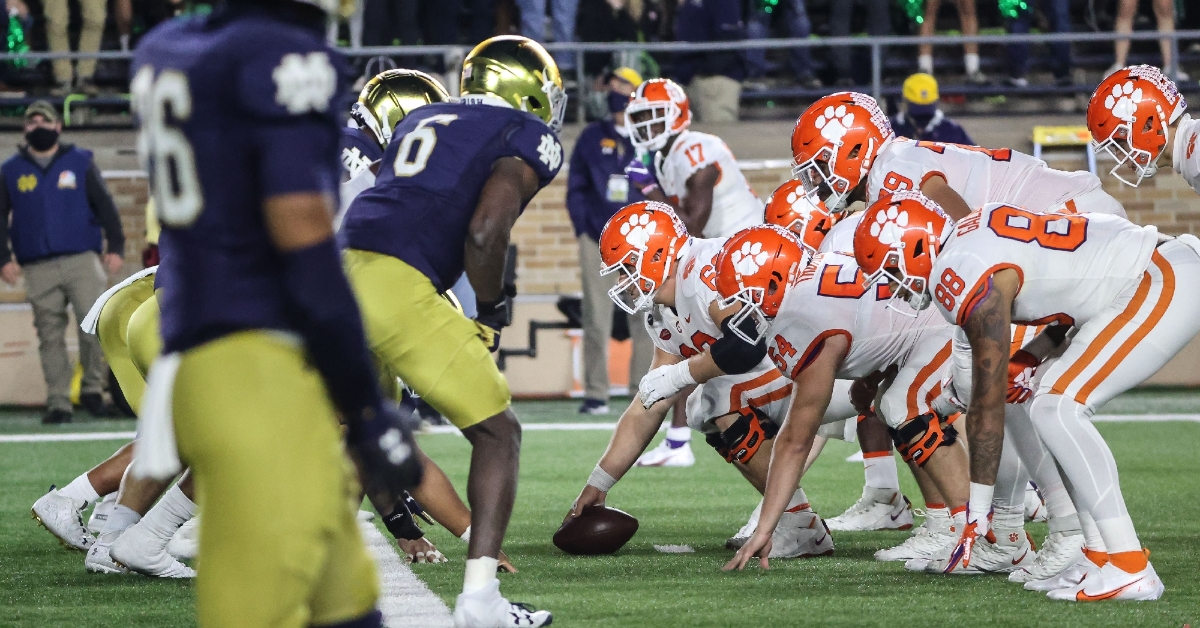 Clemson will return the bulk of its 2020 rotation on the O-line and that rotation should increase next season. (ACC photo)

Continuing our look at the Tigers’ season position-by-position with the offensive line:

* Per Football Outsiders: The line gets credit for rushing yardage between 0-3 yards (instead of 0-4) and 50% credit for yards 4-8 (instead of 5-10). Anything over 8 yards is quantified as a highlight opportunity, and credit goes to the runner. As with the pro definition, lost yardage still counts for 125%. (Garbage time is filtered out for all line yardage averages.)

Clemson’s offensive line had some moments where it was really good (Miami, ACC Championship) in 2020, and there were some moments (the first Notre Dame game, Sugar Bowl) where it didn’t live up to expectations. The Tigers had to replace four starters along the line, and while the performances were fairly good at the two tackle spots, the interior of the line struggled to get a push in the running game, especially behind center Cade Stewart and right guard Will Putnam.

Right tackle Jordan McFadden had what I thought was the best season of any player along the line, backup Walker Parks showed the future is bright at that spot (it’s likely that McFadden will either move to the LT spot and Parks will take over at RT, or Parks will simply step in at LT). Other freshmen who impressed were Mitchell Mayes and Paul Tchio. The competition should be fierce in the spring as you have to imagine that all spots are open after a somewhat disappointing fall.

Brandon Rink: The stark change in offensive line rotation was a key storyline for the 2020 campaign. With some experienced players moving into the four open starting roles, there was a lot of youth left in the backup spots this season -- and the trust was limited from coaches. The 2019 starting five averaged just over 50 snaps a game, while the 2020 group averaged just north of 65 per game. Over the course of a season, that wear-and-tear builds up.

Minimum four games, McFadden graded among the top-25 offensive tackles nationally, and both he and fellow starting tackle Jackson Carman graded well in run blocking (83.4 for McFadden; 81.5 for Carman).

Food for thought, PFF’s average grade for Clemson in the Playoff era in pass protection: 55.4; and run: 58.6. To give an idea of what the Tigers are chasing, Alabama’s average Playoff performance in the same span for pass pro: 68.4; and run: 65.4. Everybody gets tested in that Playoff round but the Tigers have had to largely succeed in spite of O-line play, while Alabama has had some higher highs in O-line action.