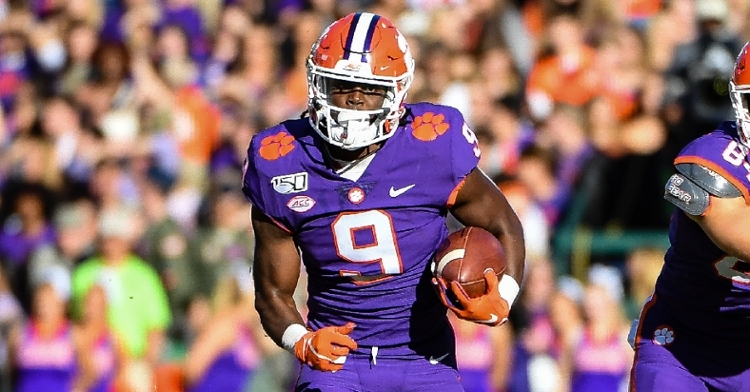 Travis Etienne set the program record for rushing touchdowns in a career and tied the career record for touchdowns overall as No. 4 Clemson defeated Wofford 59-14 Saturday afternoon in Death Valley to improve to 9-0 on the season.

Etienne carried the ball nine times for 212 yards and two touchdowns, the fourth consecutive time he’s rushed for over 100 yards. Quarterback Trevor Lawrence played one drive into the third quarter and finished his day 12-of-16 for 218 yards and three scores.

In 124 years and 1,256 games of Clemson football, Saturday marked the first time the Tigers have scored 45 or more points in four consecutive games in program history.

Clemson has opened a season 9-0 for the sixth time in program history and the fourth time in the last five years (1948, 1981, 2015, 2016 and 2018). Clemson earned conference titles in all of the previous five seasons in which it opened 9-0 and earned national championships in three of those years.

“I’m certainly proud of our guys. Obviously, Wofford’s a team that didn’t matchup with us on paper," head coach Dabo Swinney said. "But I’ve been in a lot of those games over the years, and you’ve still got to play well. I’m proud of our team. We had great energy and played well the whole game. We were incredibly efficient. The offense set the tone for us out of the gate. That’s four games in a row we’ve played really well.

"Today was a day a lot of history was made. I’m super proud of our offense. That’s back-to-back games with no turnovers. We picked up 702 yards. That’s also back-to-back games with over 600 yards of offense. This program has never scored 45 or more points four games in a row before today, too, so a lot of amazing things happened. It’s pretty remarkable what this group has done, especially when you talk about rushing the ball and spreading the ball around.”

Swinney then mentioned the defense.

“Defensively, we also made some history. That’s nine games in a row of holding opponents to less than 300 yards," Swinney said. "And that’s happened only twice in 20 years, and that’s incredible to do in today’s world of college football. I’m really proud of how consistent our defense has been all year long.”

Wofford head coach Josh Conklin said he loved the fact that his team continued to fight.

“Yeah, I mean we’re gonna fight, you know, our guys...that’s what we’re made of," Conklin said. "I was excited just to see the way they kind of responded and just kept executing and… you know, anytime you face good competition it’ll help you I think as you move down the road. "We didn’t expect anything really, coming in here. I mean we just wanted to play and execute and see if we could stay with them for a while, which we couldn’t, and we were just kind of disappointed in our execution in the first half, but I think we responded in the right way after halftime.”

Wofford won the toss but elected to defer and it took the Tigers just five plays to march 75 yards. The first play from scrimmage was a 25-yard pass to Tee Higgins, and Lawrence hit Higgins for an 11-yarder three plays later for a first down. The next play from scrimmage was a crossing route that Amari Rodgers caught in stride for a 35-yard completion and a touchdown. Just two minutes in, Clemson led 7-0.

Clemson’s defense forced a three-and-out and following the punt, it took Clemson just five plays to cover 71 yards. A 36-yard pop pass to Rodgers set up Lyn- Dixon’s 19-yard scoring romp down the left sideline, and with 9:13 to play in the first quarter the Tigers led 14-0.

The Terriers picked up a quick first down but were forced to punt just three plays later and the Tigers took over at their 19. Etienne started the drive with a 34-yard burst through the middle and then followed that with a 47-yard touchdown run for a 21-0 Clemson lead. Etienne joins C.J. Spiller and Travis Zachery as the only players in school history to record 50 career total touchdowns, and the touchdown tied Etienne with James Davis with a Clemson-high 47 career touchdowns.

Two possessions later Etienne held the record. On the second play from scrimmage following a Wofford punt, Etienne burst through the middle for an 86-yard touchdown giving him 48 and breaking the Clemson record for career rushing touchdowns. The scored also gave him 50 career touchdowns, tying him with C.J. Spiller for the most in Clemson history. One play into the second quarter Clemson led 28-0.

Etienne set another Clemson record on the Tigers’ ensuing possession. His only appearance on that drive was a 23-yard run that gave him 207 yards on the day and allowed him to become the first Clemson player to record three 200-yard rushing games in a career. One play after that run, Lawrence hit Higgins on a crossing route and Higgins scored with ease on the 22-yard completion. Midway through the second quarter Clemson led 35-0.

Defensive standout Isaiah Simmons put a stop to Wofford’s next drive, intercepting quarterback Joe Newman at the 31-yard line and returning it 19 yards to the Terrier 12. Lawrence capped off the Clemson drive with a two-yard scoring run and Clemson led 42-0 with 4:47 to play in the half.

Wofford punted on the first possession of the third quarter and it took the Tigers just six plays to cover the 84 yards for the score. Lawrence found Justyn Ross open on the right sideline and even though it appeared he was hemmed in, Ross sidestepped two defenders, found some room and dove over the goal line to complete a 22-yard score and a 49-0 Clemson lead.

Wofford found some success against a majority of the Clemson bench on the ensuing possession and scored on a 20-yard run by Ryan Lovelace. With 6:36 to play in the third quarter Clemson led 49-7, and then followed that with a three-yard run by Darien Rencher to go up 56-7. Wofford followed with a 79-yard touchdown pass to make it 56-14 through three quarters.

Clemson travels to Raleigh next weekend to take on NC State. The Wolfpack were blown out by Wake Forest Saturday and sit at 4-4 overall and 1-3 in the ACC. Kickoff is set for 7:30 pm at Carter-Finley. Clemson has won seven in a row in the series. The Wolfpack are undefeated at home this season.

Clemson vs Wofford Box Score
Get the All-New Clemson Nike Shoe before it sells out!
Comment on this story