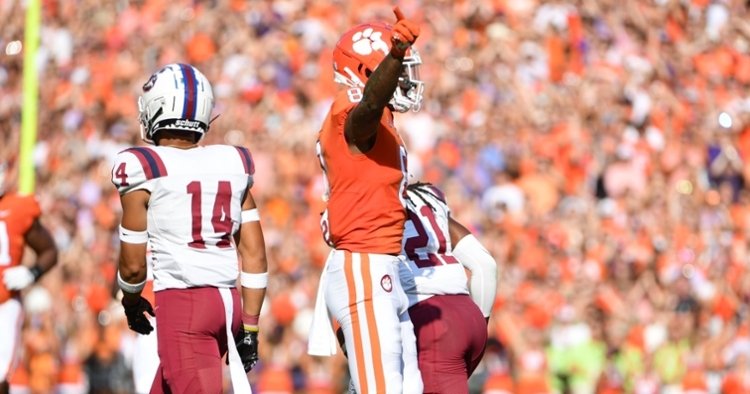 Justyn Ross points after a first down Saturday.

The Clemson offense rebounded in a big way on Saturday inside of Death Valley against South Carolina State, putting up over 500 yards of total offense and rushing the ball for 242 yards after only recording two yards on the ground last week.

Will Shipley and Justyn Ross both found the endzone for the first time this season as well as quarterback DJ Uiagalelei, who rushed for two touchdowns and threw for one.

“I thought right out the gate the offense took control and played with good precision and rhythm,” Elliott said. “We were able to run it fast in the situations we wanted to, and we had that one drive where we had the backup and we had to punt and I thought we should have done a better job of running the football in that situation.”

Uiagalelei finished the game 14-of-24 for 171 yards, one touchdown, and one interception. The California native also rushed the ball five times for 23 yards and found paydirt twice on quarterback keepers. Elliott liked what he saw from his quarterback but knows there are throws he wants back and there's some stuff to clean up.

“I thought DJ responded and managed the game the way we needed him to,” said Elliott on his sophomore quarterback. “He had a couple throws he’ll want to clean up going forward. You have to continue to go out there and play and through experience, he’ll sharpen those edges.”

The offense did turn the ball over three times on the afternoon, throwing two interceptions and putting the ball on the ground a few times, and losing one fumble on a third-down from Michel Dukes Jr.

“Only disappointments from tonight are obviously the turnovers,” Elliott said. “We had three turnovers, one was on a screen, threw the ball high and it got tipped and picked. We had a guy try to make a play and he probably wasn’t going to convert that third down and we have to keep that ball secure and not put it on the ground. Anytime you throw the ball high like Taisun (Phommachanh) did, you have to give the guy an opportunity to catch it and make that conversion.”

The offensive line did not allow a sack after an abysmal performance last weekend in Charlotte when Uiagalelei was sacked seven times. The running game came to life with Shipley and Kobe Pace receiving most of the carries in the first half and putting up over 240 yards on the ground. Elliott liked what he saw with the offensive line's work Saturday and says there are building blocks moving forward.

“Overall, to rush for 240 yards and run it when we want and how we want is good to see,” said Elliott. “I was pleased with the offensive line and how they played. The running backs got the opportunity to touch the ball more and get into a rhythm. It looked like from where I was watching we had a one-cut mentality and we ran the ball well today.”

Multiple freshmen made a big impact in their first game in Death Valley, including Shipley, who scored his first collegiate touchdown in the first quarter and punt returner Will Taylor who made some big plays on special teams and even scored a touchdown that was called back running the wildcat package. Elliott gave the nod to his freshman following the win.

“To see the young players go out there when we put them in, I thought they did a good job,” said Elliott. “When the young guys on the offensive line went in they did a good job as well, we were still able to run the ball and move the ball like we wanted to. I hate we had that penalty on Will Taylor's touchdown run, that was a thing of beauty. Coach has said it all the time, he’s a gifted athlete.”

“Shipley was doing what Shipley has been doing since he got here,” Elliott said of the true freshman running back. In the spring he was able to pop some big runs. The biggest thing with him is he just needs repetition, the same thing with Kobe (Pace). Those guys just need reps and opportunities to get in the game and make plays.”