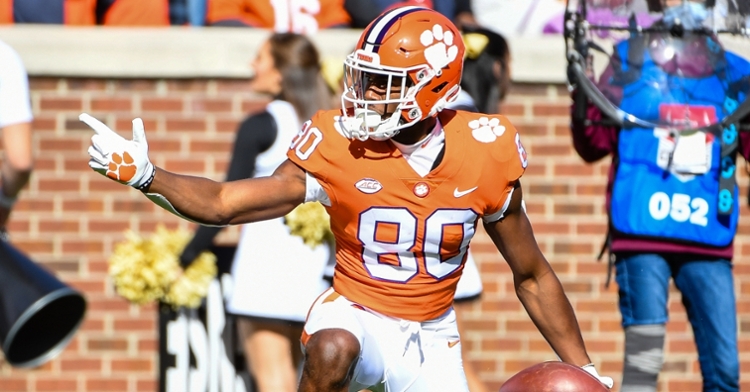 Collins and Uiagalelei connected for some big plays against Wake.

Well, the offensive breakthrough performance finally happened. And it happened when the Tigers needed it most, facing a top-ten team inside of Death Valley with the nation's longest active home winning streak on the line.

Clemson put up the most points against an FBS opponent this season as well as racking up over 500 total yards of offense, also the most on the season to date.

Quarterback DJ Uiagalelei threw the ball well and the offensive line protected him well and did not allow a sack. The Tigers rushed the ball very effectively against the Demon Deacons as well, as both Kobe Pace and Will Shipley eclipsed the 100-yard mark for Clemson. Overall, the Orange and White recorded 543 total yards, 210 of them through the air and 333 of them on the ground.

Everybody around Clemson had been waiting for this game. The game where the product on the field resembles the four and five-star athletes that are out there on the field. Clemson offensive coordinator Tony Elliott was pleased with his guys' performance and knew they had this type of performance in the bank waiting for them.

“So happy for our players,” Elliott said following the win. “We’ve talked about it week-in and week-out about how close we were to having that breakout game, where everything comes together. So happy for those guys to see the potential breakthrough. Since the start of the month of November we’ve really been harping on the foundation of the program, the DNA that these young men have and what’s expected of them. Just really happy to see them put it all together like they did this afternoon.”

“I felt like if we played to our potential we would be effective running the ball,” said Elliott. “The communication was really good, the backs ran hard and DJ kept them honest. I feel like the coaching staff did a really good job this week putting together some schemes that they might not have seen. I feel like besides the option play down there by the goal line, DJ did a good job of making the right reads.”

Uiagalelei also played his best game of the year, connecting on 11 of his 19 passes for 208 yards with a touchdown and an interception. The California native made some big plays when the Tigers needed him too and connected with his former high school teammate Beaux Collins for the third straight game for a long touchdown pass.

“I’m so proud of DJ,” said Elliott. “He’s been under more scrutiny than probably anyone else in the country. He’s got a knee (injury) and he’s been playing through it and not making any excuses about it. He prepares week-in and week-out. My challenge was to our guys to go out and let’s protect our quarterback.”

“The offensive line was challenged all week by the coaching staff and the guys on the team,” Elliott said. “We knew we had to play better because Wake Forest does a great job of coaching up their guys to play pristine. Happy for those guys, happy for (Mason) Trotter to get in there and get another start. Felt like that was the best combination for us and they went out and performed.”

Collins caught a touchdown for the third straight game, becoming the first true freshman to catch a touchdown in three consecutive games since Deon Cain did it back in 2015. Collins caught four balls for 137 yards and a touchdown while averaging 34 yards a catch.

“I’ll compare Beaux (Collins) to an Amari (Rodgers) type,” Elliott said. “He has a pro mentality and a great work ethic, a blue-collar work ethic. We knew it was just a matter of time, early in the season he dropped a couple balls and fought through that and was able to get over that hump there. The last few weeks he’s really taken off. It was a function of getting that experience to be able to get that confidence. That one-handed catch was unreal.”

The offense will look to carry the momentum into Columbia next weekend when Clemson tries to win its seventh straight over their in-state rival (7:30 p.m./SEC Network).