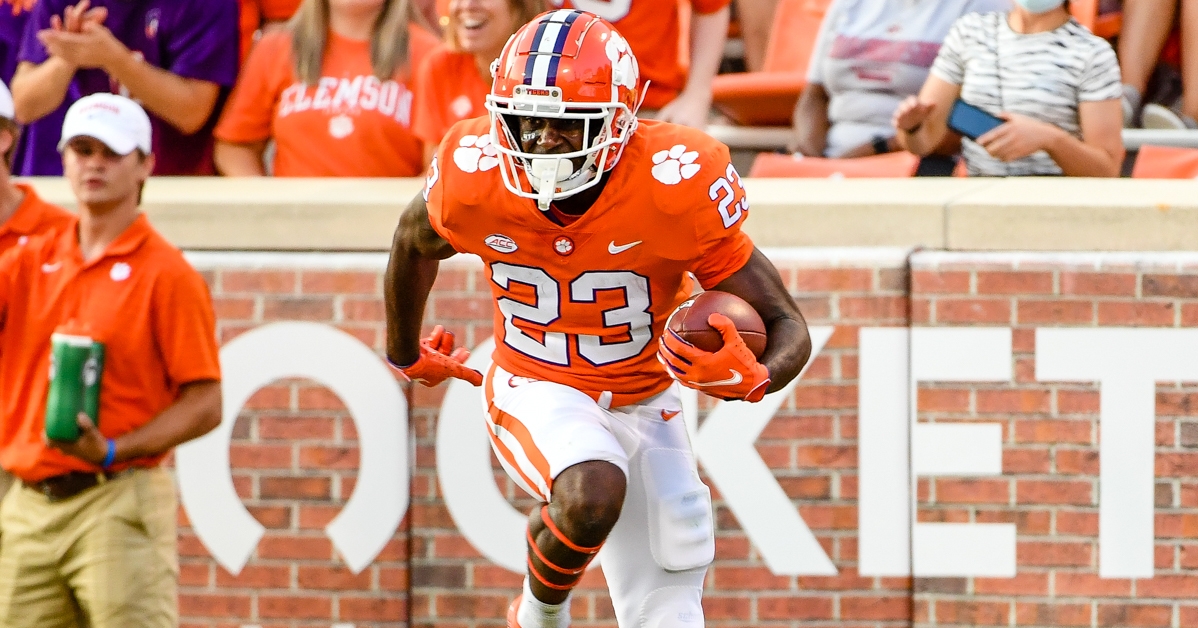 CLEMSON – Social media was on fire during both of Clemson’s first two games of the season, with many wondering why Lyn-J Dixon either wasn’t on the field or receiving more carries. Without getting into specifics, both head coach Dabo Swinney and offensive coordinator Tony Elliott have answered those questions, and the consensus seems to be that Dixon simply needs to act more like the senior he is.

Dixon had just one carry for 10 yards in the season opener, a 10-3 loss to Georgia. Dixon started Saturday’s win over SC State and rushed for 16 yards and four yards on the first two plays of the game, but his name didn’t show back up in the boxscore until the third quarter. He finished the game with four carries for 27 yards and a 14-yard touchdown reception from quarterback Taisun Phommachanh.

“He just needs to grow up,” Swinney said. “It’s that simple. He needs to be a team player. He’s a good player. Obviously, he’s very talented and we’ve seen that, but we need him to stay out of (RB coach CJ) Spiller’s doghouse.”

Elliott, who now serves as both the tight ends coach and offensive coordinator, knows all about Dixon. Elliott previously served as Dixon’s position coach and was the main recruiter for Dixon. That relationship means that Elliott has taken the time to talk with his former pupil.

“I have because I’ve been a part of his life,” Elliott said Monday. “But at the same time, too, CJ has to establish the culture in that room. Really the biggest thing is just accountability and communication between the two. I remember when I first came in (as Clemson’s running backs coach in 2011), I had Mike Bellamy, I had Demont Buice, (Andre) Ellington was an older guy, I had Hot Rod (Roderick McDowell), and I had to establish the dominant role in that room.

“Obviously, Ellington had been here for a while, and not saying that we were butting heads, but we had to get on the same page. He had to understand what my coaching style is, and that’s what you’re going through there.”

Elliott then said that Dixon has to get used to Spiller’s hard-nosed style.

There is no denying Dixon’s talent. He entered 2021 with 1,372 rushing yards and 13 touchdowns on 208 career attempts and 183 yards on 18 catches in 519 career snaps over 38 games. He entered his fourth season ranked second in school history in yards per carry (6.60) behind Clemson legend and former teammate Travis Etienne.

“There’s no question about the type of player that Lyn-J is,” Elliott said. “Lyn-J’s made a bunch of plays for us in this program. The biggest thing is just getting on the same page with his coach and the things that his coach is asking him to do. And it’s not necessarily football stuff, it’s the total package. And I think that’s been illustrated in our program, that everything matters if you’re going to be the lead guy and the first guy that runs out.”