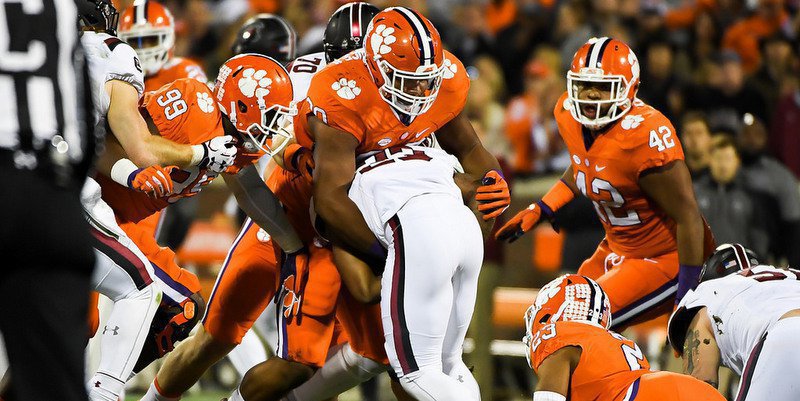 The 2019 NFL Draft is still a year away, but early mock drafts have four Tigers going in the first round.

CBS Sports released a 2019 mock draft Sunday that has all four of Clemson’s starting defensive linemen being picked in the first round.

We told you Sunday that one NFL scout is warning people that Clemson’s defensive line is overrated.

CBS doesn’t seem to agree and has junior Dexter Lawrence going with the third overall pick to the New York Jets.

3. New York Jets - Dexter Lawrence, DL, Clemson. The massive Lawrence is in for a massive season with Clemson. Even if his stats don't come out looking impressive, coaches are going to fall in love with his ability to wreck offensive lines. The Jets have said goodbye to multiple talented linemen in recent years, and here's the guy who could be the next in line for this defense. Leonard Williams will be in his expensive option year in 2019, so this is also insurance that the line will still have some level of talent if Williams walks in 2020.

It doesn’t take long for another Clemson player to come off the board as Clelin Ferrell is taken with the fourth overall pick by the Chicago Bears.

4. Chicago Bears - Clelin Ferrell, DE/LB, Clemson. This could be a historic class for defensive line talent, including four Clemson defenders who could all do in the first round. I don't see the Bears picking this high after having a great draft, but it's also entirely possible this is a little high to project Ferrell. However, if he has another year like the one he did in 2017, it's hard to see him falling out of the top 10.

Christian Wilkins is then taken by the Seattle Seahawks with the 14th overall pick.

14. Seattle Seahawks - Christian Wilkins, DT, Clemson. I'm done projecting the Seahawks to invest early draft picks in the offensive line, no matter how bad it gets. But I also think late-round pick Jamarco Jones could be a steal that quickly develops into a starter at tackle. Wilkins is a top-tier talent but fighting several other top defensive linemen (including some on his own team) to emerge as a top-10 overall prospect.

Austin Bryant rounds out the draft class as the 28th overall pick by the Los Angeles Rams.

28. LA Rams - Austin Bryant, DE/LB, Clemson. The Rams stockpiled Day 3 picks in the 2018 draft, using three of their 10 picks on Saturday to take shots on edge rushers. If the position in still a need heading into next year's draft, they could find great talent late in the first round thanks to the depth at edge rusher. Bryant is one of four Clemson defensive lineman taken in this mock draft. Yes, they're that good up front.

In case you’re wondering, the Miami Hurricanes hold the record for the most players taken in the first round of the draft with six taken in the 2004 draft. Miami’s 2004 draft class featured some big-time household names. Safety Sean Taylor went to the Redskins, tight end Kellen Winslow II to the Browns, linebacker Jonathan Vilma to the Jets, defensive tackle Vince Wilfork to the Pats, and linebacker D.J. Williams went to the Denver Broncos.

The Ohio St. Buckeyes had a stellar 2016 draft class, finishing just one pick shy of Miami’s 2004 record with five first rounders. The Buckeyes also set the record for the most players selected through three rounds with 10, and had a player from every position group taken with three rounds left.