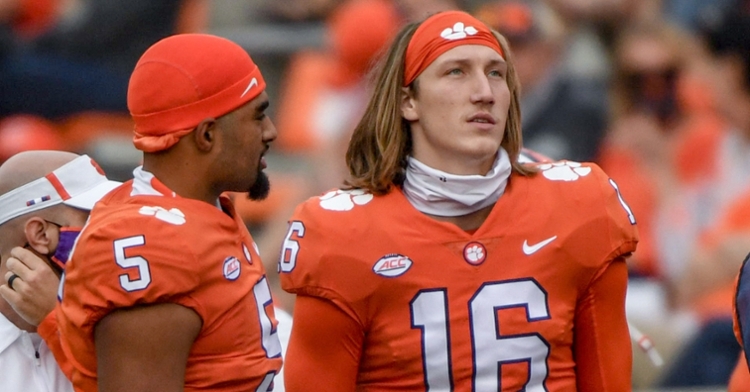 Uiagalelei (left) says he learned a lot from Lawrence (right).

There are 130 FBS Division I football programs in America, and DJ Uiagalelei could have gone to 129 of them and probably won the starting job as a true freshman. Instead, the former five-star recruit and No. 1-rated pro-style quarterback commit chose to come to Clemson and sit under the 2021 NFL Draft top pick Trevor Lawrence.

When asked about it last year, the California native said he chose Clemson to learn under Lawrence and quarterbacks coach Brandon Streeter like Green Bay Packers quarterback Aaron Rodgers did in the first few seasons of his NFL career under Brett Favre.

“Me being able to learn under Trevor (Lawrence) and see the things he does, I just try to take notes,” Uiagalelei said last September when asked why he chose Clemson over somewhere he could start right away. “I pick his brain here and there just to see what makes him great and see what he does everyday to make him great and the sacrifices he makes.”

Uiagalelei also said that learning from a legendary quarterback like Lawrence was better for his game than going somewhere where he could start right away.

“Coming here and learning under a quarterback like Trevor I feel like is a bigger accomplishment than going somewhere where I can play right away,” Uiagalelei said. “I’m playing behind the best quarterback in the country and I get to pick his brain, it’s kind of like when you go into the NFL, like when Aaron Rodgers sat behind Brett Favre and got to pick his brain and see how he sees the game. Now look at Rodgers, he’s a great player for Green Bay.”

Now that Lawrence has moved on to the Jacksonville Jaguars, it is officially time for the "Big Cinco" era to begin in Tiger Town. We saw Uiagalelei show off his arm and field vision last year in the two starts when Lawrence was diagnosed with COVID, but now this Clemson team and offense is set to get some California love.

When asked at ACC Media Days in Charlotte last month just what Lawrence taught Uiagalelei about the game, the sophomore said he learned from the best about being a professional, but not just on the field, in everyday life as well.

When Uiagalelei takes his 2021 snap inside of Bank of America Stadium against the Georgia Bulldogs Sept. 4, it won’t be the first big game of his career. Growing up and playing high school football in one of the best leagues out on the West Coast, the sophomore quarterback battled fellow five-star recruits in conference and postseason play. Last year, he was thrown into the fire in the largest comeback in Clemson history against Boston College and passed for the most yards ever against Notre Dame on the road. Uiagalelei is not one to shy away from big games.

The game against Georgia, however, is probably the biggest and most influential game the quarterback has ever played in, and he knows just what is at stake.

“I played in a lot of big games in high school, but nowhere near the magnitude of the game we’re about to play,” Uiagalelei said. “In high school, I think we played in front of 15,000 fans so nowhere near a full capacity stadium. I like the big games, I like the big moments. It doesn’t really get me nervous. We’re going to play a great team against Georgia and I’m really excited to be able to get to play them in Charlotte.”

Uiagalelei and his offense will have to crack a Georgia defense that was one of the best in the nation last year. They added some key components through the transfer portal during the offseason, including former Clemson cornerback Derion Kendrick.

With the talent and strength that the Uiagalelei has, the Big Cinco era in Clemson should be very, very fun to watch starting next month.