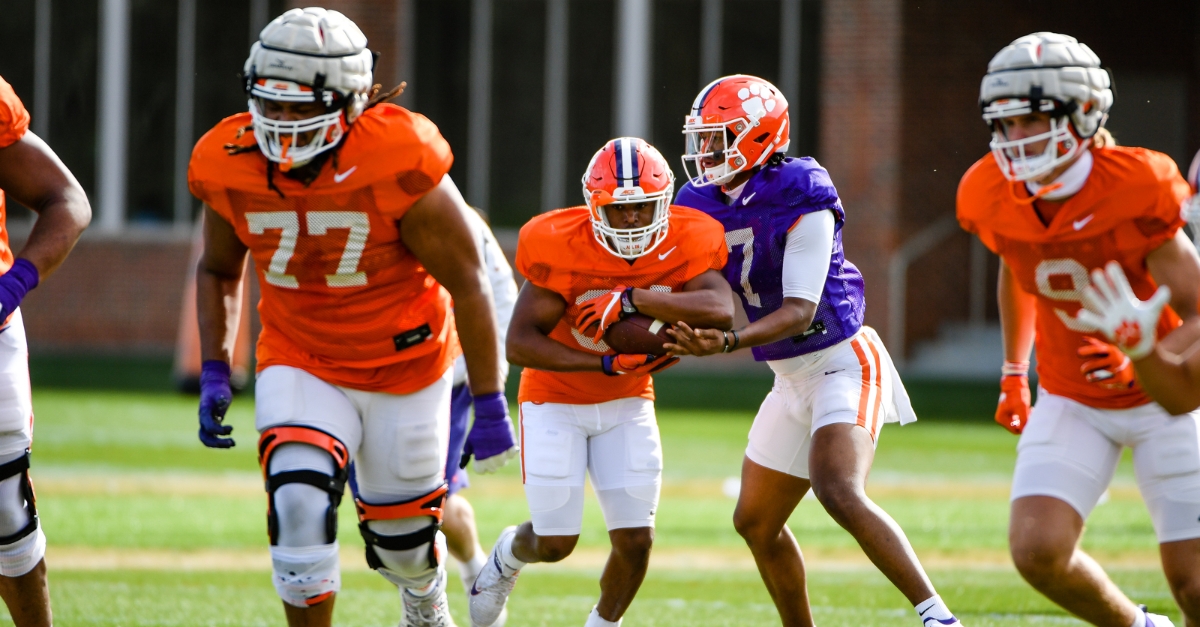 Taisun Phommachanh is working his way back from a COVID pause.

Sunny skies, a warm day, and a hard-hitting scrimmage in Death Valley make for an almost perfect afternoon, but head coach Dabo Swinney says the defense has to tackle better.

Clemson scrimmaged for two hours Friday afternoon in the last big scrimmage ahead of next Saturday’s annual Orange and White Game, and Swinney said both offenses had good days while the defense had its moments.

Here are some quick notes from our interview with Swinney:

*Today was second scrimmage, last time going good-on-good. They will split the team Monday and do more scrimmage work. He is looking forward to the spring game and he thinks it will be a good evaluation day.

*He is pleased with how they ran the ball and a lot of big plays. Run defense wasn’t great but they created some turnovers and had a safety at the goal line. It was one of those days where there was good and bad on both sides. Too many critical penalties and bad snaps. Both offenses won the day in the two-minute drill. The effort is good, but they have a long way to go – would have gotten smashed today because of the penalties and mistakes and missed tackles, Swinney said.

*The coaches will grade this and then coach them up and learn from what they put on tape this spring and carry the plan out to what they have post-spring and summer. He is pleased with the depth they are developing on the offensive line.

*Matt Bockhorst hasn’t done any live work this spring and Paul Tchio has played a lot of left guard. Bryn Tucker and John Williams have progressed. Trent Howard developed mono and hasn’t been able to play. Marcus Tate has a chance to be a really special tackle and he hasn’t done anything that makes them doubt his potential. But Tchio has done a really great job and he feels good about the functionality of that group. By fall camp he thinks they will be back to playing winning football and back to where they were a few years ago.

*A good day for the wide receivers. Ajou Ajou has had a great spring and made two big plays today and is night and day from where he was last August. He has made big strides and knows what he is doing. Joseph Ngata had a good day, as did EJ Williams. EJ Williams has had his three best practices in a row from a physicality standpoint and making plays. He loves the freshmen, Beaux and Dacari Collins, and both players made plays today. Will Brown and Will Swinney have done a good job in the slot with Ross out. The entire group has done a great job and they are performing well, including blocking on the edge. He thinks they have a chance to be an elite group there.

He loves the mentality of the two freshmen, and they are way ahead of the curve for the typical freshmen from a foundation that you have to have to be a good receiver at this level. Fundamentally and technically, they are further along. They are very confident and will just get better.

*For Taisun Phommachanh, this was his first time being able to scrimmage and he did a lot of good things. Swinney had to challenge both Phommachanh and DJ Uiagalelei to play like they didn’t have on a purple jersey and go make plays. Hunter Helms went in there and made a few plays but all three are progressing.

There is no chance the Tigers would go to the portal to recruit a QB unless someone leaves. Swinney says they believe in Phommachanh. He was the third guy last year and is a critical piece in what they are trying to do. He didn’t get a full spring or summer last year. DJ is an elite, elite talent but they need what Phommachanh brings to the table. He has a chance to be an outstanding player. They also have Bubba Chandler and Will Taylor coming in this summer that he thinks will provide help and competition this fall.

*Swinney says the defense has simply “gone back to work.” He says the playoff games are hard and they’ve taken their lumps in the last couple of years but you have to be good enough to get there. Clemson has been good on defense a lot the last decade and it’s important to not forget that. Brent Venables gives his best every single day when he walks in the building.

*The backup linebackers have been great. Swinney says they have a great one in Jeremiah Trotter, is very natural, and he has a great future. They only signed one linebacker because they love the guys on the roster like LaVonta Bentley, Kane Patterson, and Keith Maguire. Kevin Swint is a very natural player and will be on the field somewhere. Trenton Simpson is working both the WILL and the SAM and is making tremendous progress.

*With the tight ends, Swinney likes the combo of Braden Galloway and Davis Allen. They did some good things last year and they could have benefitted from a full year of being able to train last year. He says that Davis Allen is a complete tight end. Galloway is a developing guy who will be complete by the time he leaves. He is special when it comes to making plays. They complement each other really well. Galloway has to have minor surgery on his finger and won’t play in the spring game. Sage Ennis also broke a finger and is out next weekend, will have surgery next Monday. Ennis has had a great spring. Freshman Jake Briningstool is a natural, had two touchdowns today and really makes plays.

*Freshman defensive tackle Payton Page has made big strides. Swinney says “he is a load and has a chance to be a special player.” He can create another line of scrimmage and is unique. But he needs a good summer and needs to work on his body and nutrition.

*Greg Williams is making a lot of progress and is transitioning fully to being a defensive end. Swinney thinks he will keep getting better and better and in two years everyone will look up and see that he is great player. Demonte Capehart is making progress and is a different player than he was last year. Tre Williams is explosive and tough and can find the football but has to improve his knowledge and technique.

*Swinney notices Bryan Bresee every single day. Bresee had a safety today and “is a problem.” He said Bresee shows up every day.