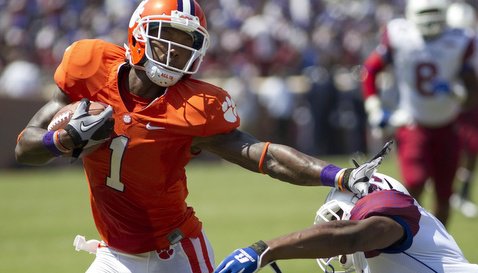 CLEMSON – The Clemson football team has a bevy of talented juniors, and recent NFL draft analysts have listed some of those players as potential targets for NFL teams next spring should they decide to declare for the draft.

Stephone Anthony
Jr. Linebacker
#42 6-2, 235
Polkton, NC
View Full Profile all have the talent to play at the next level, but Clemson head coach Dabo Swinney

Dabo Swinney
Head Coach
View Full Profile said Tuesday that he thinks all of those players – other than Watkins – would benefit from an extra year in school.

Swinney, speaking during a Monday morning teleconference with the media, said anyone advising those players to turn professional after this season is dispensing bad advice.

“I don't think any of those guys should come out other than Sammy,” Swinney said. “I think all those guys need another year. I don't think there's any question about it. Anybody who's telling them otherwise isn't very well informed.”

Watkins is almost certainly a first round pick, and Beasley has been mentioned as a possible first rounder, while Bryant and Anthony have the athleticism and talent to be picked later in the draft.

Bryant is especially intriguing, and his combination of size of speed is perfectly suited for the next level. Last Thursday night, all of that was on display against Georgia Tech as he caught five passes for 176 yards and two touchdowns, a 35.2 yards per catch average.

Swinney admitted that each of those players could declare, but said he thinks that if a player isn’t a lock as a first round pick, they should come back to school.

“Could those guys come out? Absolutely,” Swinney said. “They're capable of playing at next level. But only guy who fits category of coming out early is Sammy. If you're not first-rounder it is not in your benefit to come out. Sammy's got a decision to make. But haven't had that discussion with him.”

Chad Morris
Offensive Coordinator / QBs
View Full Profile said Monday that Bryant is just scratching the surface of his talent, and would be benefit from an extra year.

“He is just now starting to figure out how dominant he can be,” Morris said. “And he would be one of those guys that would definitely benefit from getting that extra year under his belt.”

Will they limit Tajh Boyd

“No. We're going to do whatever we have to do to win the game. Tajh is fine. He wanted to come back in the other night. If it takes Tajh playing four quarters to win, that's what we'll do. Hopefully we can play well and get some of those other guys in there. But who knows? Nobody's 100 percent right now after 10 ballgames. But he can absolutely go play four quarters of football.”

Shaq Anthony
RS So. Offensive Tackle
#76 6-3, 265
Williamston, SC
View Full Profile , too. He played both sides. Thought Battle did a really good job. We were all hoping he'd hold up mentally, and he did. Got a little banged up, but went back in and finished strong. Hopefully that's a good spark for that young man. He's naturally a pass protector. He's long and he can do a great job of getting his hands on guys.”

“I don't know how all that stuff will work out. But I think it's definitely a positive to be able to, when you're playing a bunch of conference games, just from our past experience this has been a week when we've either been trying to clinch the division or whatever. Sometimes you don't have control over those things, but if you had total control over those things you like the schedule the way it is.”