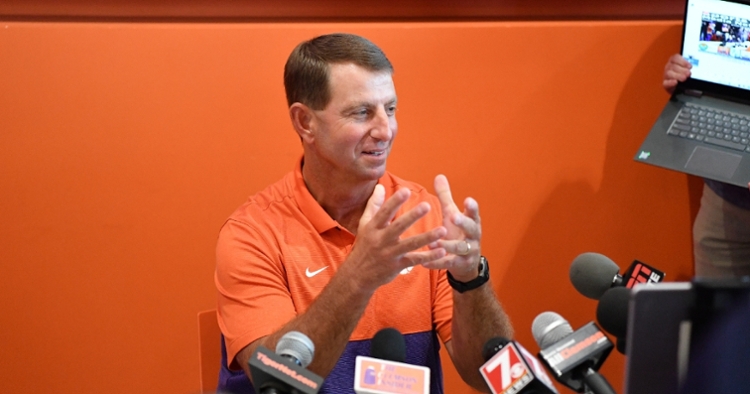 Swinney says he and players aren't a fan of the bigger Playoff proposed.

CLEMSON – Head coach Dabo Swinney loves the differences between college football and the NFL, and one of those differences is that in the college game, the regular season games matter. If the sport moves to a 12-team College Football Playoff, he thinks it will have negative consequences on the game.

Swinney, meeting with the media for the first time since last April, was asked about playoff expansion during his press conference Tuesday.

"I'm not for it. I wasn't for the four-team (format),” Swinney said. “Our team isn’t for it. They don’t want to play more games. The more you expand it, the less important the season becomes and the more you become the NFL. I think the bigger question is where is college football going from a structural standpoint.”

The athletics directors and commissioners involved in the decision to expand the Playoff said there would be six spots reserved for the highest-ranked conference champions and the other six going to at-large selections. When the idea was announced in June there was no indication in the proposal about when an expanded Playoff could be in place. The soonest would seem to be for the 2023 season and it could be as late as the 2026 season.

“I love the college game, and I loved it when it was a big deal to be top-25, top-15, top-10, go win the bowl game. Somebody's gonna be the national champion or whatever — it's 130 teams,” Swinney said. “So, I just always loved that. I knew when it went to four, it was gonna become all about the Playoff. When it goes to 12, it's gonna become more about the playoff. But that's inevitable. It is what it is. Some people, 'Well, yeah, you've been in the playoff.' We can get in with four, we're gonna get in with 12.

"I think the more you expand it, the less important the season becomes. Again, the more you become the NFL as far as — well, you're in the playoffs so why play Trevor (Lawrence) in this game,” Swinney said. “You're already in. Just play the other guys. I think there's unintended consequences. I get it, and I know why it's happening, and it's gonna happen. There'll be something. I don't know if it's 12 or whatever it will be.

“If it's a 40-team league — 12 teams, that can be kind of fun. But with 130 teams for one trophy, it's not like basketball where you get two or three guys and this team over here can get hot and make a run in the tournament. It's a different deal. This is a game built in the trenches. Not enough big, strong men on that offensive line and defensive line to go all over the country to have many teams that have a shot at winning the national championship."