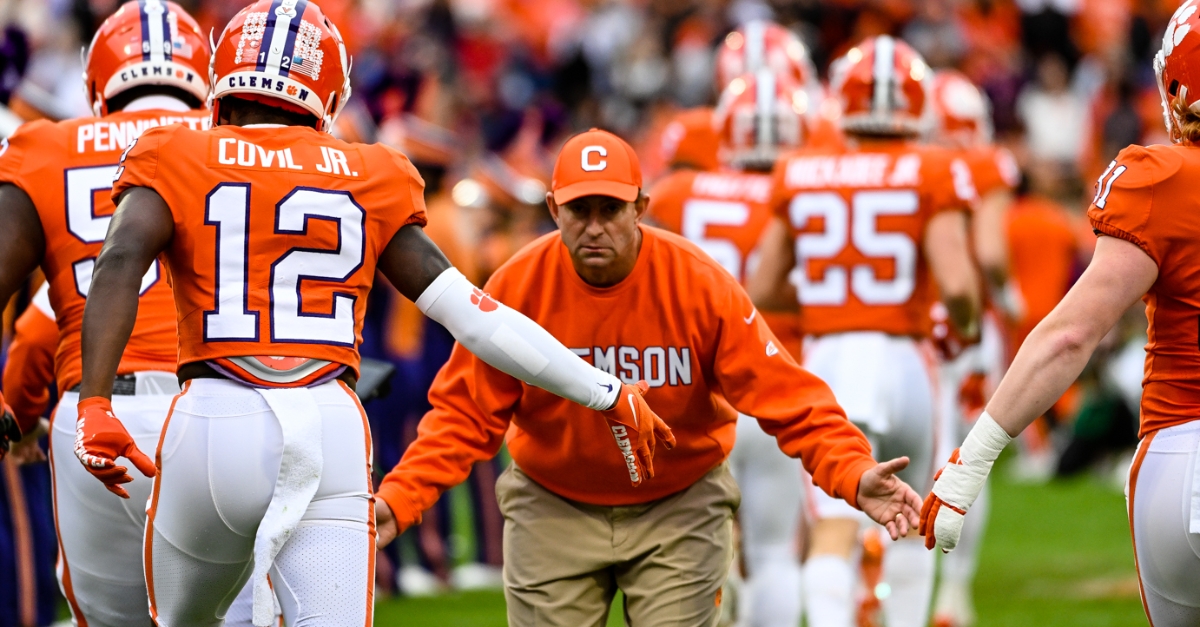 Clemson coach Dabo Swinney ready for the season of its own that is the rivalry game.

CLEMSON – Throw out the record books. South Carolina is coming to town.

Clemson head coach Dabo Swinney met with the media Sunday evening on his weekly teleconference to review the win over Miami and look ahead to this week’s home finale against South Carolina. The Gamecocks blew out Tennessee Saturday night to brighten up a season of offensive struggles, but Swinney said rivalry games are a different animal.

"It doesn't matter what your records are or what you're coming off of. This is a game where you throw all that stuff out. It's all about this game,” Swinney said. “It's not what you've done last year or throughout this year. It's about how you play in these four quarters. College football, as you saw yesterday, is unpredictable. It's hard to win. This is the biggest game of the year and a season of its own. It's a goal of its own. It's a fun game to be a part of. I've been a part of a lot of rivalry games. It's a fun week to get ready and a game that both teams will put everything they have into finding a way to win."

Swinney said he was able to watch a lot of the Gamecocks’ win over the Vols.

"I was able to watch a good bit of it last night after I got home. It's a tough place to go and play,” Swinney said. “Their quarterback (Spencer Rattler) was great. Momentum is a powerful thing. They played a complete game in all phases. Tennessee, it wasn't their night. You have to give South Carolina all the credit for that. Their quarterback was just outstanding. A lot of big plays."

The Gamecocks received a season-best game from Rattler.

"I watched him when he was at Oklahoma. He was a highly-recruited guy,” Swinney said. “He throws well on the move. He's just a really good football player. That's why he was the starter at Oklahoma and as highly-recruited as he was. Everything you like about a quarterback, he has. He's got a great arm and is a competitor."

"Just a good game by our guys. I'm proud of our guys. Offensively, another fast start,” Swinney said. “Back to back games where we have had good balance. We had a couple of big drops but did a better job with penalties. We just controlled the game. We were 14 of 19 on third downs. We scored 100-percent in the red zone. I thought DJ (Uiagalelei) did a great job, as did Mitchell (Mayes) coming in. Outside of the third quarter where we had a turnover fest, we were very solid. A lot of good things in the game.

"Defensively, we were dominant. 98 total yards and only eight at the half and 40 of those yards came on one play. We won the line of scrimmage. That's back to back games where we have affected the quarterback. We created more takeaways. We were cleaner penalty-wise. We had a couple of critical errors and some busts that we have to get cleaned up. I just loved the effort of the team against a team that had come off a big win. A fun night. A good tape to grade. "We have to turn our attention now to this game. Thanksgiving changes our routine a little bit. We have a great challenge ahead."