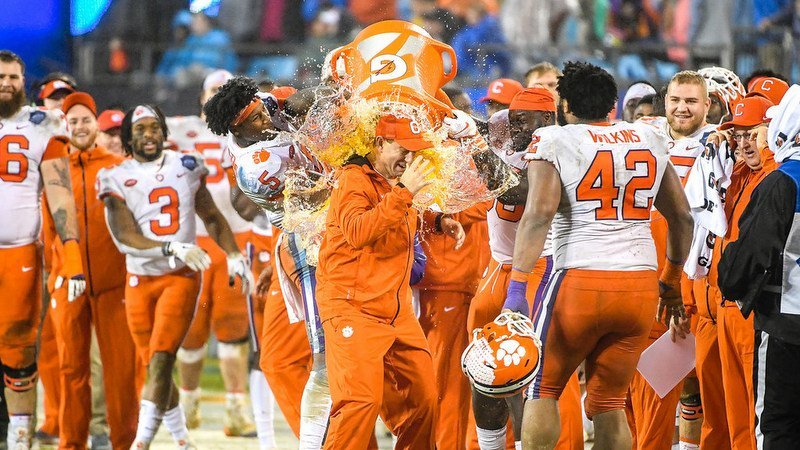 Cycling out? Not under Swinney's watch

Cycling out? Yeah. That’s not happening. Not anytime soon anyway.

Clemson head coach Dabo Swinney met with the media Wednesday afternoon in the WestZone, a few hundred feet from the playing surface that saw his team end the regular season with another win over arch-rival South Carolina and another dominating run through the Atlantic Coast Conference.

The Tigers put together another solid Top-10 class and have the chance to make the class even better if a couple of late commitments find their way to Clemson.

Gamecock play-by-play announcer Todd Ellis famously said last season that the coaching staff at Clemson was scared to death of Will Muschamp’s progress at South Carolina and even went as far as to say that Clemson was cycling out.

That statement is as funny today as it was a year ago.

Let’s face it – it’s not just South Carolina that is chasing Clemson. The rest of the ACC is chasing Clemson and every team not named Alabama, Ohio St., Georgia, and Oklahoma are trying to play catch-up with the nation’s elite. Considering that this year’s College Football Playoff features a team that has been there all five times (Bama), one four times (Clemson), and one three times (Oklahoma), the teams at the top are staying at the top. Add in Ohio St. (two appearances and barely missed a third this year) and the Playoff looks eerily similar each season.

How good was Clemson’s recruiting class? Clemson’s 26 future student-athletes announced on Wednesday represent 14 states, the most for a Clemson signing class since 1989, Danny Ford’s last class. That ties for the most different states in a class on record. The previous high for Clemson under Head Coach Dabo Swinney was 10 different states represented in the classes of 2016 and 2017.

Thirteen of Clemson’s 26 signees in this class are ranked among the nation to 300 by at least one of the five major recruiting services. The highest ranking for any of the signees is held by cornerback Andrew Booth, Jr., who is ranked eighth in the nation regardless of position by Rivals.com. Booth and Frank Ladson are ranked in the top 51 in the nation by all five services. Ngata is ranked in the top 50 in four of the five. Booth is the highest-ranked Clemson signee by ESPN.com (30th) and Tom Lemming (27), and Ladson is the highest-ranked by Prep Stars (22) and 247Sports (33).

The Tigers are losing two starting scholarship offensive linemen (Justin Falcinelli and Mitch Hyatt) and added Hunter Rayburn and Kaleb Boateng Wednesday, with the potential for a third later Thursday in Will Putnam.

Five of the players that signed are on the defensive line, a position of need, and most of those players were hand-picked by defensive coordinator Brent Venables. With both lines taken care of, the coaches were able to go out and recruit some of the nation’s best skill players.

That includes tight end Jaelyn Lay, a guy that I have nicknamed “Freakazoid” in my phone because of his freakish athletic ability. I texted a friend Wednesday night and told him that Lay has the most potential of any tight end prospect I’ve ever seen, and it appears that Venables agrees with me.

"I look at Jaelyn Lay here. Not that I'm the tight ends guy, but man I have not seen a more competitive player than Jaelyn Lay,” Venables said. “His skill set is super, super special. We matched up with the tight ends in a lot of the 1-on-1s in camp and Jaelyn Lay is the most impressive tight end prospect that I've seen in a camp since I have been coaching."

Wide receiver Frank Ladson is another big-time get.

"Frank's a guy that we found out about early,” wide receivers coach Jeff Scott said. "Really he's one of these guys that's a special talent. He runs extremely well, very explosive, and the video kind of speaks for itself. But where I was most impressed with Frank is when he and his family -- his mom, his dad, brother and sister -- they all came up with him in January for a junior day, and I knew within the first five minutes this was a Clemson family, and this was a Clemson type of young man and he's not just going to like it here, he's going to love it here.

"But very explosive. I think he is similar to some of the guys that we have right now that can really take the top off and run by guys, and he's going to be a lot of fun to watch."

Add in leaders like Bryton Constantin and Sheridan Jones and Andrew Booth and this class has it all. Why? Because, according to Swinney, the Tigers are a Rolls-Royce program right now.

“You don't see those because the value of their brand brings people to them, and that's kind of where we are as a program. Our brand has grown to the point that people want to come and see Clemson. They want the offer from Clemson, and they're not going to get it if they don't come to see it. So it's made us unique, and I love that about where we are, and that's reflective in our signing classes.”

So what will it take for those programs chasing Clemson to close the gap? It isn’t by watching Clemson finish near the top five in both the recruiting rankings and final polls each season while they finish 20 or so spots behind. Jumping one or two or three spots in the rankings while Clemson continues to hum along at an unprecedented rate isn’t closing the gap…it’s running in place.

Cycling out? Yeah, probably not.