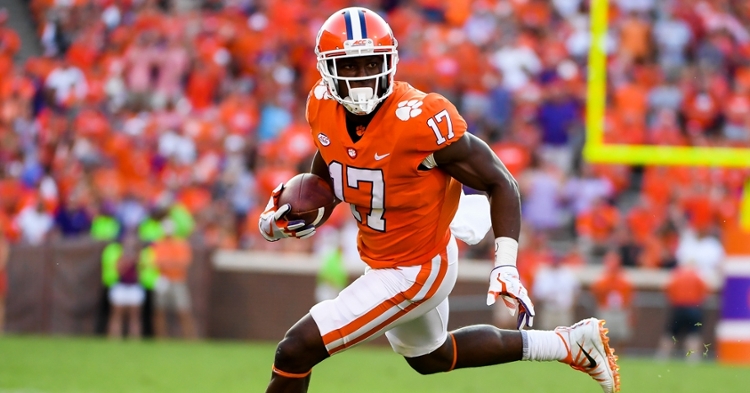 Cornell Powell was at home with friends and family watching the NFL Draft Saturday when one phone call changed his life for the better.

A former four-star recruit out of high school, Powell burst onto the scene in 2020 for a Tigers team in contention for a national championship appearance. In 12 games played in 2020, Powell caught 53 passes for 882 yards and seven touchdowns on 53 receptions. Prior to 2020, he posted just 40 career catches for 329 yards and three touchdowns.

His stellar final season in Clemson led to Powell being selected with the 181st overall pick (fifth round) by Kansas City head coach Andy Reid and the Chiefs. Powell was at home when he got the call, and he said he didn’t know until he got the call shortly before the pick.

“I was watching it on TV with my family and friends. I was just praying for the best,” Powell told TigerNet. “I knew that God was going to make a way for me and I knew that it was going to happen.

"I knew when they called me. They called me and told me they were going to take me with their next pick at 181. It was special. It was a phone call I will never forget, and it's a moment I can never replace or recreate.”

“I talked to everyone. From coach Andy to coach Eric Bienemy, I talked to all of them,” Powell said. “It was just crazy. They are looking for me to come in there and compete. That is what I learned how to do at Clemson. I learned how to compete and that is what I am going to do is go in there with that mindset. I want to earn and then keep a spot.

“It's an unbelievable situation I am walking into and I know I am going into a place where they expect greatness. They expect that they are going to reach the championship and I have to go in there with that mindset."

Powell was on campus for Deshaun Watson’s last year in Clemson, spent a year with Kelly Bryant, and three years with Trevor Lawrence, who was picked No. 1 overall by the Jacksonville Jaguars. Now he moves on to Patrick Mahomes, arguably the game’s best quarterback.

“You can't really put it into words, because I am going from one great quarterback to the next,” Powell said. “As soon as I get to Kansas City and get to work with Patrick, just try to get on the same page as him and try to make something happen for the team. And the ultimate goal is to win a Super Bowl and I’m ready to do that. I cannot wait. I am just ready to get down there and get to work and get in the lab. I am ready to start working with them.”

Powell recently got engaged, graduated from Clemson with a degree in Management in December, and now adds being drafted by the Chiefs to a whirlwind five months.

“It's been unbelievable. It's been a dream,” Powell said. “I feel like I am living in a fairytale and everything I thought about happening in life is happening. You just can't make it up.”