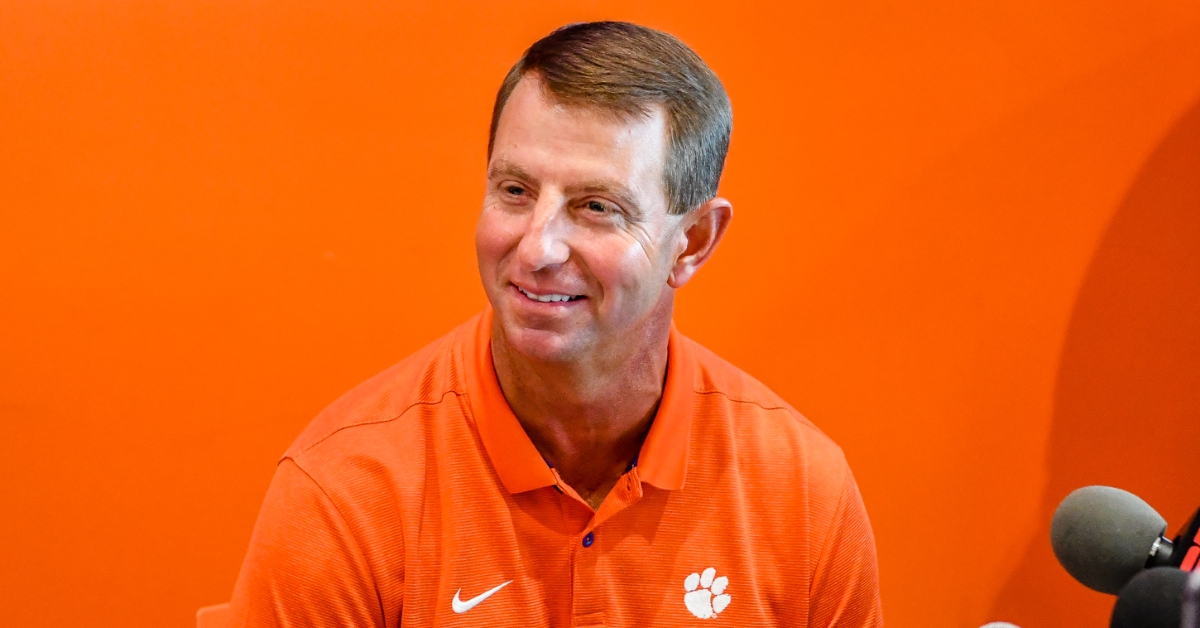 Clemson coach Dabo Swinney will do the preseason media circuit soon and the ACC's future will be a central topic.

A decade ago, the message boards and social media were awash with rumors about possible Big 12 expansion, and Clemson was one of the schools rumored to be changing conferences. That never felt like a real possibility, even though it was fun to talk about. However, as rumors swirl nationally about possible Big Ten (B1G) expansion or the SEC expanding its footprint even more, this feels real.

In other words, schools around the country are going to have to decide if they are going to be left behind or forge ahead in the brave new world awash with billion-dollar TV deals, NIL, and the transfer portal. Where will Clemson wind up? Where will the Tigers be five years from now? The SEC? The B1G? Still in an ACC that has also cast its eye on further expansion? It’s too early to tell, but a lot of people smarter than me have pointed out that there might very soon be two super conferences, and those that want to stay relevant in football had better be in one of those two.

Now, a big sticking point is the ACC Grant of Rights. In 2016, the ACC Council of Presidents unanimously agreed upon the current rights, which run through 2035-36, and stipulate that an ACC school’s media rights remain with the conference through that period regardless of membership status. Also in 2015, the ACC struck a deal with ESPN through 2035-36. That means leaving the ACC means giving up all money earned through media rights until midway through the next decade. That will be in the hundreds of millions.

However, I received a text from an agent early Thursday telling me the news that USC and UCLA were bolting the PAC-12 for the B1G. He then told me that “there’s more to come.” When I mentioned the Grant of Rights, he sent back a laughing emoji and said he had already spoken with more than one athletic director and that, “They will let that play out in the courts.”

The general consensus is that both the Big 12 and the PAC-12 are done being major conference players. It might not happen this year or next, but their decline is coming. So where does that leave the ACC? At this point, I am not sure that even adding Notre Dame would be able to help.

The league’s ADs and commissioner Jim Phillips held a conference call Friday and the message was that the ACC is still in a strong position and that the Grant of Rights will hold the league together. As another media member said, I wonder if the ADs were secretly saying all the right things but texting “under the table” to make sure they aren't the ones left behind.

One thing is already clear – the ACC is far behind the SEC and the B1G when it comes to money payouts.

Each ACC school received an average of $36.1 million, a number inflated by Notre Dame joining the conference full-time for a year because of the pandemic.

Reports surfaced Friday that both UCLA and USC could each earn up to $100 million per season as part of a new B1G media rights package.

For those of us who grew up watching Jefferson Pilot and the ACC, grew up watching ACC rivalries and attending the ACC Tournament, talk of leaving is hard. It’s painful for many. But money talks, and if other schools are making three times what Clemson is making – and the Tigers are already behind some schools in the NIL market – it will be difficult to remain a player in the arms race. And you can bet that two other PAC-12 schools – Washington and Oregon – are already trying to make a move. An Oklahoma State might be looking to move ASAP, and in the ACC, it’s going to be all about Clemson, FSU, and Miami.

Someone will be the first to announce. It’s now or never, as painful as that it to some of us old-timers. What will Clemson do? What will the ACC do? I have no idea, but the ACC Football Kickoff is in under three weeks in Charlotte, and instead of talking about Miami’s supposed resurgence or Tony Elliott’s first season at Virginia, I can tell you what the hot topic will be.