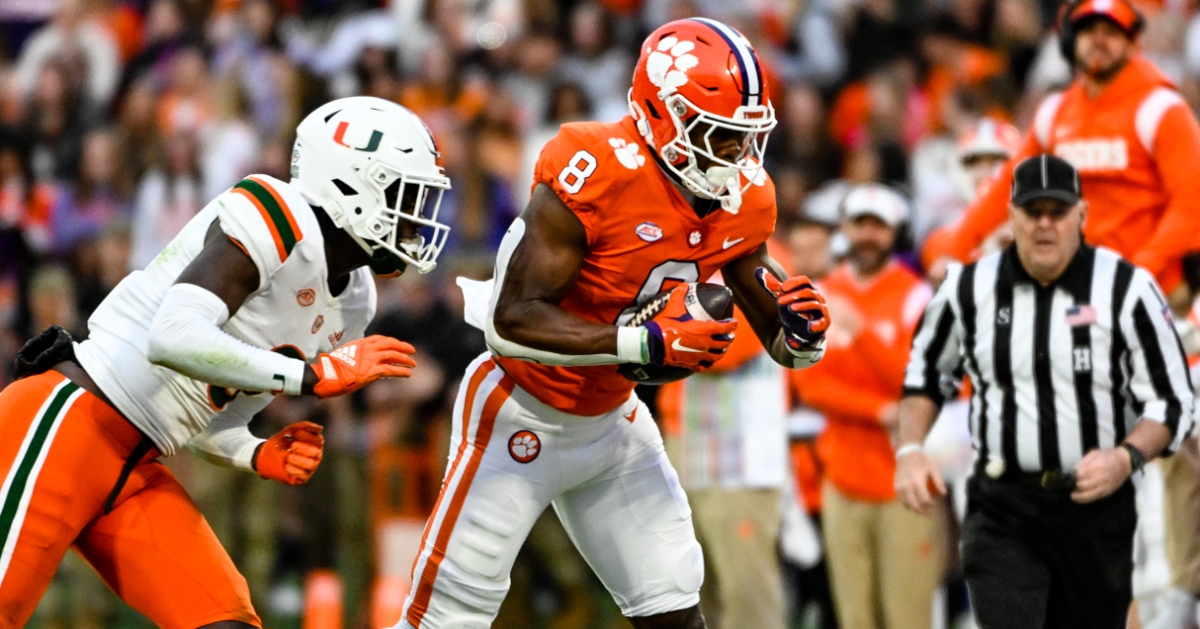 Adam Randall played in 12 games after suffering a torn ACL during the previous spring practice.

Clemson’s depth chart at wide receiver will probably change several times between now and the season opener. Why? Because now everybody has to prove themselves.

When Joseph Ngata declared for the NFL Draft recently, it left a sizable hole in the wide receiver room. The Tigers return a grand total of 161 career catches to the team this season, along with 31 career starts. Most of those starts and catches belong to Antonio Williams and Beaux Collins.

There is news for those that follow depth charts – Chad Morris brought the numbering system for receivers with him to Clemson a decade ago, and we learned about the 9-man, 2-man, and 5-man. It appears that numbers are gone and letters are back in style – the X receiver lines up on the line of scrimmage (or LOS) and is on the side of the formation opposite the tight end. The Z receiver is the receiver on the same side (usually) as the tight end and he lines up off the LOS. The Y receiver is the tight end. And the slot guy – think Hunter Renfrow - is the H. And if you see a 4-wide receiver set, the two slot receivers are the Y and the H (or tight end and slot) with X and Z as the outside guys.

So, who will be the X? I am not sure anyone knows for sure. You get the idea that Antonio Williams will start in the slot (or H), but from there? No idea.

Beaux Collins typically played on the side opposite Ngata (who would have been the X) last season. He is still recovering from surgery on his shoulder, and his status from spring practice is not known. He’s missed a lot of practice time the last two seasons but still caught 22 passes for 373 yards and a career-high five touchdowns in 465 offensive snaps over 10 games (all starts).

After those two? Adam Randall wowed everyone last spring but then tore his ACL and missed the spring game and the first two games of the season. He returned to play but never got in a groove and caught just 10 passes for 128 yards in 290 offensive snaps over 12 games (one start).

Don’t be shocked if Cole Turner throws his name in the ring for that X spot. He’s still raw but flashed down the stretch of his redshirt season in 2022 as he enters 2023 with eight career receptions for 161 yards in 102 offensive snaps over three games, including a 100-yard effort in his second career game in the 2022 ACC Championship Game. The key to Turner is that the coaches don’t see him as a slot guy, not with his 6-foot-3 frame.

Williams enters 2023 after an impact freshman season in 2022 in which he garnered Freshman All-America recognition after posting 604 yards and four touchdowns on 56 receptions in addition to serving as the team’s punt returner for most of the season. If he’s in the slot, Brannon Spector is a valuable veteran there with 34 career catches for 347 yards and two touchdowns and two rushes for 21 yards in 521 snaps over 28 career games (six starts).

Will Taylor is another slot guy, but he’s also battled injuries and has played just 44 offensive snaps in two years.

Speaking of injuries, Troy Stellato is another player who flashed last fall camp but missed all of last season after a knee injury in fall camp and has just two receptions in two career games. If he’s healthy, he’s a viable option at one of the outside spots.

Freshman Noble Johnson will be on hand this spring after enrolling earlier this month. He finished his prep career with 101 receptions for 1,739 yards (17.2 avg.) and 14 touchdowns over 26 games. Johnson added 22 career kickoff returns for 510 yards, a 23.2-yard average and finished his senior season with 51 catches for 865 yards and six scores and 11 kickoff returns for 203 yards.

Arriving over the summer are Ronan Hanafin, Tyler Brown, and Misun Kelley.