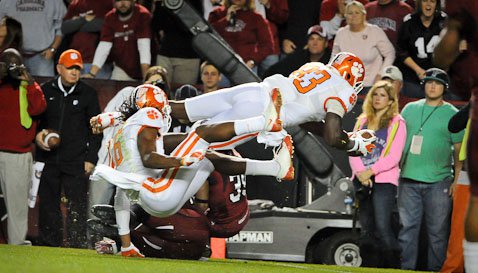 Dwayne Allen
RS Jr. Tight End
#83 6-3, 255
Fayetteville, NC
View Full Profile in the first half. It was Boyd’s 28th touchdown pass of the year, breaking the mark of 27 by Cullen Harper in 2007. It was also his 32nd scoring pass in terms of touchdown responsibility (TD passes and rushing scores). It broke the record of 31 set by Woody Dantzler in 2001.

*Allen scored his sixth receiving touchdown of the season tonight. It is the second most for a tight end in Clemson history. He is now just one short of the record of seven by Bennie Cunningham in 1974.

Rashard Hall
Gr. Safety
#31 6-1, 210
St. Augustine, FL
View Full Profile led Clemson in tackles tonight with 12. It is his season high and third most by a Clemson defender this year.

Drew Traylor
RS Sr. Tight End
#82 6-5, 250
Birmingham, AL
View Full Profile blocked a punt in the first half, the first blocked kick of any kind this year and the first of Traylor career. He was with 29 punt return yards on the play, his first career return yards of any kind.

Sammy Watkins
Fr. Wide Receiver
#2 6-1, 200
Fort Myers, FL
View Full Profile was held to four receptions for 39 yards tonight, but did go over the 70 catch mark for the season. He now has 72 for the season, third in Clemson history. The record is 88 by Aaron Kelly in 2007 and Rod Gardner had 80 in 1999. Watkins now has 1073 receiving yards for the season, third in Clemson history, but he needs just 12 receiving yards in the ACC Championship game to break Rod Gardner’s record of 1084 set in 1999.

*Andre Ellington needs 63 yards in the ACC Championship game to reach 1000 yards for the year. When he does it will make this just the third team in Clemson history with a 1000-yard rusher and a 1000-yard receiver.