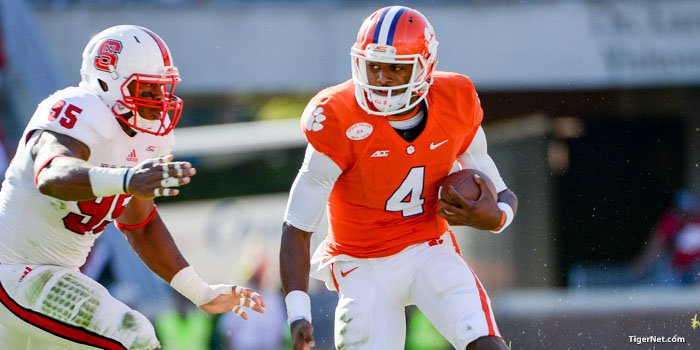 Deshaun Watson led the Tigers to a 41-0 rout over the Wolfpack last season.

Clemson and NC State renew acquaintances Saturday afternoon in Carter-Finley Stadium. It seems like NC State has long been the proverbial thorn in the side of the Tigers, and with Clemson riding a winning streak and a number three national ranking, can the Wolfpack make Carter-Finley a house of horrors? The Tigers have won three in a row in the series and 10 of 11 overall, but the last loss was in 2011 when a 7th-ranked Clemson team rolled into Raleigh and got blistered.

Will history repeat itself? Let's take a look.

Of note: Nine of the last 18 games have been decided by eight points or less, including 2010 when Clemson won 14-13 in Death Valley against the Pack and quarterback Russell Wilson.

N.C. State has been susceptible to the big play, and offensive coordinators Tony Elliott and Jeff Scott have been very good at finding the weaknesses in opposing defenses and exploiting them. Two weeks ago in the Boston College game, Deshaun Watson threw for 420 yards, and then last week in the Miami game the Clemson offense rushed for over 400 yards. The Tigers have found a two-headed monster at running back with Wayne Gallman (128 carries for 713 yards and six touchdowns) and Zac Brooks (20-150-3). Clemson’s leading receiver is Artavis Scott with 450 yards, but the player who has had a breakout season is Jordan Leggett who leads the team with six receiving touchdowns. Leggett creates matchup nightmares for opposing defenses and has filled in nicely for Mike Williams in the redzone.

Coming into the season, Clemson’s defense was a huge question mark, but seven games in the starters and backups have answered the bell and quieted all of the naysayers. The Tigers are giving up just 105 yards on the ground (13th in the country), 156 yards through the air (9th), are ranked fourth in total defense and are giving up just 14 points per game. A big part of that has been the dominant play of the Clemson defensive line and linebackers who have accounted for 63 tackles for loss. The secondary has lived up to the ‘No Fly Zone’ mantra with 10 interceptions.

For N.C. State, the offense begins and ends with quarterback Jacoby Brissett and the Pack running game. In State’s two losses this season, Louisville held them to just 45 yards on the ground and 13 points and Tech allowed just 157 yards on the ground and 13 points. Matt Dayes is the Wolfpack’s leading rusher with 125 carries for 793 yards – a 6.3 yard per carry clip – and 12 touchdowns. Brissett has completed 122-of-182 passes for 1,332 yards and 10 scores against only one interception. However, State’s top two receivers are a fullback (sophomore Jaylen Samuels) and a running back (Dayes).

The key for Clemson’s defense will be third down. The Tigers have been very good at getting off the field as the defense as allowed opponents to convert just 21-of-103 attempts, a conversion rate of 20.39% that is second nationally (Michigan leads at 19-for-97, 19.59%). On the flip side, the Wolfpack have converted 42-of-96 third down attempts this season, a conversion rate of 43.75% that ranks 38th nationally.

Clemson and N.C. State are even at punter with both Andy Teasdall and A.J. Cole averaging right around 41 yards per punt. On kickoff’s Jackson Maples has 28 touchbacks and three kicks out of bounds in 43 attempts, while Ammon Lakip has 13 touchbacks in 27 attempts for Clemson.

The Tigers advantage is in field goal kicking where Greg Huegel has connected on 9-of-11 attempts with a long of 47. Kyle Bambard is just 3-for-8 with a long of 36 yards and has had one attempt blocked.

The last time Clemson lost to an unranked team was a 2011 drubbing at the hands of N.C. State in Raleigh, however, this is a different team and head Coach Dabo Swinney said he wasn’t even going to talk about that game to his team. In games against lesser competition N.C. State has looked very good, but just average when playing teams of similar talent. The Tigers have not been susceptible to the letdown so far this season and I don’t anticipate that starting on Halloween. Clemson’s defensive line will need to set the edge against Brissett and not allow him to roll out of the pocket or dink and dunk the ball down the field. If they do that and barring any turnovers or fluky plays – more tricks and less treats, if you will – Clemson wins this one comfortably.