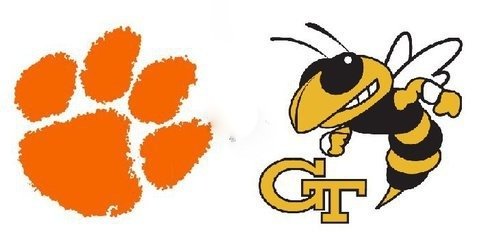 Clemson and Georgia Tech in the rain? Let’s go.

The cross-division ACC rivals renew acquaintances Saturday night in Death Valley. Both teams have a lot to play for – neither team can afford another conference loss if they want to make it to the ACC Championship Game. For Clemson, another loss pretty much crushes all of the season goals.

Big game? You bet. But like head coach Dabo Swinney said before Syracuse, they are all big games.

Clemson won 4 in a row at Clemson

*This has been a home stadium series advantage in recent years. The home team has won seven of the last eight games in the series with the only road win taking place last year when Clemson won 26-7 in Atlanta. Twelve of the last 21 games have been decided by five points or less, including a six-game streak between 1996-01 in which every game was decided by exactly three points.

*John Heisman coached at both Clemson and Georgia Tech. He coached the Tigers program from 1900-03 and led the Tigers to a 19- 3-2 record and two conference championships. Clemson won the SIAA conference title in 1900 and 1902 under Heisman and played in its first “postseason” game ever in 1903.

*Georgia Tech offensive line coach is Ron West, who coached at Clemson as a full-time coach under Tommy Bowden from 1999-2008. He was offensive line coach from 1999-03 and outside linebackers from 2004-08. He is the only assistant coach in Clemson history to coach at least four seasons on both sides of the ball. West’s ties to Clemson go back to his days as a player. He was an offensive lineman who was on the Clemson bowl teams of 1977 and 1978. He lettered in 1978 when he was an off and on starter.

*The Yellow Jackets have not only been “in” every game this season, they’ve kept it close. Both of Georgia Tech’s defeats this season have come by just one point — a 42-41, double-overtime loss to Tennessee in the season opener and a 25-24 defeat at Miami (Fla.) on Oct. 14. Georgia Tech is the only NCAA Division I FBS team with multiple one-point losses this season and the first ACC team with multiple one-point losses in a season since 2006. Of the 360 minutes that Georgia Tech has played in regulation this season, it has only trailed for 37:25. The Yellow Jackets have trailed for just 5:01 of 180 regulation minutes played after halftime.

*They are catching Clemson at a time when the Tigers are struggling, offensively, to find an identity. Quarterback Kelly Bryant has been hurt, and the passing game hasn’t hit as many big plays as we’re used to seeing. In fact, Clemson ranks 88th nationally in long passing plays, with just 19 over 20 yards this season. If the offense once again struggles or Clemson has to turn to backup Zerrick Cooper, this will be a 60-minute game. That means kickers could come into play, and we know Clemson has at kicker right now.

*The Tigers are tough at home, and it’s at night.

*Defensive coordinator Brent Venables has been tough against Paul Johnson and the GT option attack. The Yellow Jackets scored 31 points in each of Venables’ first two games in the rivalry – in 2012 and 2013 – but the Tigers have held Tech to just 19.6 points per game since. In fact, Tech rushed for just 95 yards a year ago and 71 yards in 2014, both lows for a Johnson-coached offense. Senior linebacker Dorian O’Daniel is also at his best against Tech - entering this year, O’Daniel had each of his top three tackle games as a Tiger against Georgia Tech. He had ten stops including a sack at Tech in 2014, then had eight tackles including three tackles for loss in a Clemson win over Georgia Tech in 2015, and finally eight stops and two tackles for loss against Paul Johnson’s team last year. O’Daniel has 26 career tackles in 140 career plays with six tackles for loss and two sacks in his three games against the Yellow Jackets.

*As bad as the offense has looked, at times, they are still putting up good numbers. Clemson has one of the most balanced attacks in the nation in terms of yardage. Clemson averages 449 yards per game, 219.6 yards rushing and 229.4 passing. The difference in yardage between rushing and passing for the course of the season is just 69 yards. The Tigers have 1606 yards passing and 1537 rushing for 3143 total.

This needs to be a game, like Virginia Tech, where the Tigers come out and play shutdown defense and make big plays on offense, rendering the final score a moot point. They need to be in control the entire game, as they have been all season until Syracuse. But did the Syracuse game expose some holes? Will the defense continue to attack and dare the Tigers to throw down the field? Is the secondary as bad as they looked? Can Clemson win if Kelly Bryant has to go out of the game? Can Clemson kick a field goal?

There are still a lot of questions to be answered, but the guess here is that the Tigers get a few of those questions answered Saturday night. Paul Johnson isn’t going to stray too far from what he does, and he won’t run tempo. Venables’ group will get stop after stop, and the offense will do enough to keep the Jackets guessing. Johnson will figure out a way to hit some big plays after making adjustments but expect Clemson to rely more on Tavien Feaster and Travis Etienne in this one. At home, at night, with better players, Clemson prevails.