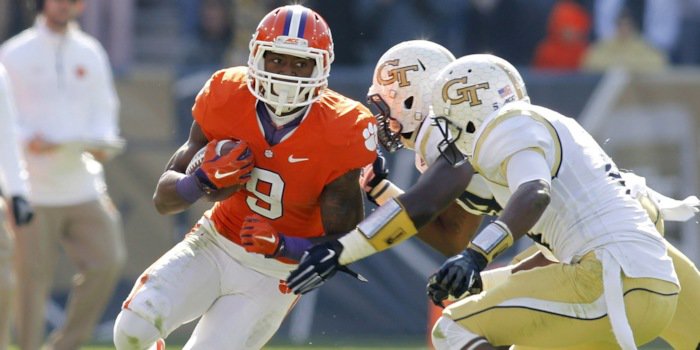 It’s the Bees and the Tigers in Death Valley. It’s never boring. It’s frequently close and thrilling, and Clemson has had its share of trouble with the Ramblin' Wreck from Georgia Tech.

The ACC cross-division rivals renew acquaintances this weekend as No. 6 Clemson looks to win a second conference game while the Yellow Jackets look to snap a three-game losing streak after a promising 2-0 start.

*Clemson has won the last three games played at Clemson, all under Dabo Swinney

Dabo Swinney
Head Coach
View Full Profile . Swinney is 3-1 against Georgia Tech in Memorial Stadium and the only loss took place in 2008 when he had been named interim coach the Monday before the game. Tech won that game, 21-17.

*John Heisman coached at both Clemson and Georgia Tech. He coached the Tigers program from 1900-03 and led the Tigers to a 19-3-2 record and three conference championships. Clemson won the SIAA conference title in 1900, 1902 and 1903 under Heisman and played in its first “postseason” game ever in 1903.

Justin Thomas is the perfect quarterback for Paul Johnson’s system. Thomas is 13-6 in his first 19 career starts at QB, including a 3-2 record versus ranked teams. He’s 2-2 versus Top 10 teams, beating SEC foes No. 9 Georgia and No. 7 Mississippi State in the Orange Bowl. Despite the run-based offense, Thomas has thrown a touchdown pass in nine straight games dating back to last season, the longest streak for a quarterback under Johnson. However, Tech has had trouble moving the ball over the last three weeks when it counts, and there isn’t just one reason. Inexperience at A-back, poor blocking and some head-scratching decisions by Thomas have led to the miscues. The Yellow Jackets have lost five fumbles and Thomas has tossed two interceptions, and the turnover margin hasn’t been what it was last season.

Tech is averaging 30 less yards per game from last season and doesn’t sit in the nation’s Top 40 in total offense. For Clemson, the key players just might be ends Shaq Lawson

Kevin Dodd
RS Jr. Defensive End
#98 6-5, 268
Taylors, SC
View Full Profile . Both players have been stout against the run, and are important cogs when it comes to “setting the edge” and playing with gap integrity. Defenses have taken away Thomas’ option on the pitch over the last three games, and they could run into more of the same Saturday. Two other keys could be safeties Jayron Kearse

T.J. Green
Jr. Safety
#15 6-3, 203
Sylacauga, AL
View Full Profile . Both have been solid in run support, but if they get caught crashing the line or peeking into the backfield Thomas can burn them deep. Tech is ranked sixth nationally in rushing offense and Clemson is 25th nationally in rushing defense – something has to give Saturday. The one that blinks will lose.

ADVANTAGE: SLIGHT TO CLEMSON BECAUSE THEY ARE PLAYING BETTER RIGHT NOW

Clemson’s offense has yet to be explosive in games that really matter, and it’s cause for concern. Certain receivers are showing very little fight, and Deshaun Watson

Deshaun Watson
So. Quarterback
#4 6-2, 207
Gainesville, GA
View Full Profile can’t seem to find a groove. Is it the play calling? Is it execution? Has it been dicated by the weather and the defenses? Probably a little bit of all. Artavis Scott

Artavis Scott
So. Wide Receiver
#3 5-10, 191
Oldsmar, FL
View Full Profile had three catches for just 19 yards a year ago against Tech, a result of Watson’s first half injury and resultant poor quarterback play. Scott had a big catch early last week against Notre Dame, but it’s time for the Clemson coaching staff to get the Florida native a lot of touches. Speaking of playing time and a lot of touches - running back Wayne Gallman

So what do we expect this week? Hopefully more balance. Tech’s rush defense hasn’t been spectacular, and Watson averaged 5.7 yards per carry last week, and I expect the Tigers to once again make him a major part of the rushing game plan. UNC dual-threat quarterback Marquise Williams led the Tar Heels to the biggest comeback in school history (21 points) with 15 rushes for 148 yards (9.9 yards per rush) with two touchdowns in the Heels’ 38-31 victory over Tech last week. Gallman will do his usual work, so that leaves the passing game. Can it finally get untracked? My unsolicited advice to the offensive coaches….play the kids. Play Deon Cain

Trevion Thompson
RS Fr. Wide Receiver
#1 6-2, 193
Durham, NC
View Full Profile . See if they can help Watson get it going. We might have gotten a sneak peak at the plan earlier this week when Swinney said he hoped the weather held off because Clemson was ready to unveil the Air Force. If the Tigers can get it going through the air, then….

Tech kicker Harrison Butker is 3-for-5 this season on field goals and does a decent job on kickoffs, with 21-of-34 attempts not returned. Senior punt returner Jamal Golden is dangerous – he has seven returns for 131 yards this season and is averaging 18.71 yards per return. He hasn’t been quite as explosive on kickoff returns and is averaging just 22 yards per return. Tech did allow a kickoff return for a touchdown at Duke. Punter Ryan Rodwell is serviceable, averaging 40 yards per punt.

Artavis Scott has given Clemson a spark in the kickoff return game –he’s averaging 27 yards per return – and McCloud has a 73-yarder to his credit. The Tigers are getting better there and have been close to breaking one. This could be the week. Clemson still has issues at kickoff return defense – Louisville returned one for a touchdown and Notre Dame was a Jayron Kearse tackle away from another. Ammon Lakip

Ammon Lakip
RS Sr. Punter / Kicker
#36 5-11, 200
Alpharetta, GA
View Full Profile is back and handling kickoffs, but we don’t know how effective he can be because of the weather last week. Punt returns? The Tigers sit 120th out of 127 teams, averaging just 1.20 yards per return. Andy Teasdall

Honestly…this is a wash, but the team that gets the big return might get the momentum.

I’m a big believer in the hangover effect, something Clemson will have to overcome after last week’s big win. The Jackets will come out desperate and playing for their conference lives, and that makes them more dangerous than usual. I expect Tech defensive coordinator Ted Roof to sell out to stop the run and – get this – make Watson beat them through the air. If the Tigers continue to be predictable on first and second down, that could set up Roof’s exotic blitz packages. Can the Tigers then protect Watson well enough to give him time?

The Jackets will hit some plays on offense. That’s a given. But Dodd and Lawson and those cats on defense are fairly salty this season, and it won’t be easy. Clemson does enough defensively and the offense finally finds a rhythm in the second half and begins to pull away. But it’s never comfortable.