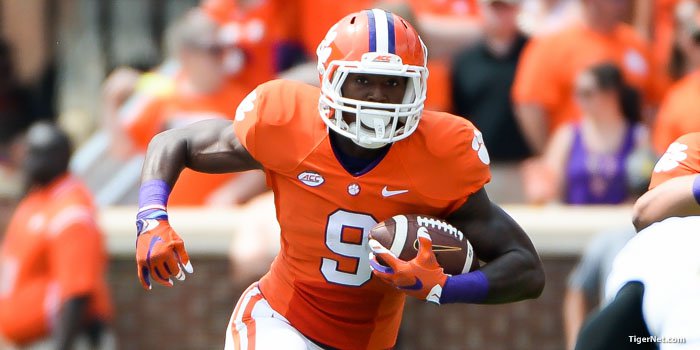 Wayne Gallman led the Tigers against Wofford with 14 rushes for 92 yards and 2 TDs.

Clemson coasted to a 49-10 victory over Wofford last Saturday in the season opener, but the competition ramps up this week when the Appalachian St. Mountaineers come to town. The Mountaineers are riding a hot streak, and they look to topple the 12th-ranked Tigers in Death Valley Saturday afternoon.

The two teams haven’t played each other since 1997, but there is a lot of familiarity between the programs:

*Appalachian State quarterback Taylor Lamb’s great-grandfather Julian Gamble played baseball for the Tigers from 1940-42 before he went into the service. At age 94 he is planning to come to the game on Saturday. Second, his dad, Bobby Lamb, is the head coach at Mercer University where he coaches Grant Radakovich, a tight end for the Bears, who is the son of Clemson Director of Athletics Dan Radakovich

Deshaun Watson
So. Quarterback
#4 6-2, 207
Gainesville, GA
View Full Profile is good friends with ASU linebacker Devan Stringer. When Watson’s mother was in the hospital fighting tongue cancer for a long period of time, Watson spent much of the time staying with Stringer’s family. The two have been friends since they were in grammar school.

*For the second week in a row, Clemson has a coaching influence on the opposing team for a game at Death Valley. Last week Brian Mance, who played for the Tigers from 1999-2002, was a member of the Wofford defensive coaching staff. This week, former Tigers Justin Watts and Scot Sloan return to their alma mater to coach against the Tigers. Watts is the wide receivers coach and Sloan is the secondary coach.

Can the Mountaineers pick up a win?

*The Mountaineers are a dangerous team. Like Clemson, they played an inferior opponent last Saturday when they hosted Howard, but the Mountaineers outgained the Bison, 663-172, in the win. Appalachian’s 663 yards were the fourth-most gained by an NCAA Division I FBS team in the first week of action and the 172 yards allowed were the ninth-fewest surrendered by an FBS squad in Week One. The shutout was App State’s third in a calendar year. The Mountaineers blanked Campbell (66-0) and Georgia State (44-0) on Sept. 6 and Nov. 1 of last year, respectively.

*They are also on a roll. Appalachian State’s seven-game winning streak is the fifth-longest in NCAA Division I FBS, behind only Ohio State (14 games), Boise State (10), TCU (9) and Memphis (8). Clemson has a modest four game winning streak that is ninth-best nationally, tied with NC State.

*The offense is dangerous. Sophomore quarterback Taylor Lamb completed 16-of-21 passes for 209 yards and a career high-tying three touchdowns. Lamb was removed from the game after tossing his third touchdown pass of the afternoon to Simms McElfresh to give the Mountaineers a 35-0 lead on the first series of the second half. Lamb also rushed four times for 41 yards, giving him an even 250 yards of total offense in a little more than one half of work. App State junior running back Marcus Cox ran for 105 yards and a touchdown on just 11 carries (9.5 ypc). The 100-yard effort was Cox’s 15th in 25 career games, moving him into a tie for the fifth-most 100-yard rushing games in program history.

*Will Clemson be looking ahead to the nationally-televised game with Louisville next Thursday night?

NOTABLE: Appalachian State owns seven all-time wins against current members of the Atlantic Coast Conference, the most against any Power 5 conference. However, all seven of Appalachian State’s wins over ACC opponents have come against longtime local rival Wake Forest. The Mountaineers are 1-11 all-time against nationally ranked FBS opponents. App State’s only victory over a nationally ranked FBS opponent was its historic 34-32 victory over No. 5 Michigan on Sept. 1, 2007.

Ray-Ray McCloud
Fr. Wide Receiver
#34 5-9, 181
Land O' Lakes, FL
View Full Profile did not start the season opener against Wofford, but he came off the bench to grab eight passes for 80 yards, including a 32-yard catch from reserve quarterback Nick Schuessler

Nick Schuessler
RS Jr. Quarterback
#12 6-3, 202
Grayson, GA
View Full Profile . McCloud’s reception total was the most in Clemson history for a freshman in his first game. Others have had more yards, but no one has had at least eight receptions, not even recent Tigers who went to the NFL in Sammy Watkins

Martavis Bryant
Wide Receiver (2011 - 2013)
#1 6-5, 200
Calhoun Falls, SC
View Full Profile . Twenty-seven of the 77 players who played against Wofford were either freshmen or redshirt-freshmen.

*The offense had a very vanilla gameplan last week, and still rolled. Clemson gained 533 yards of total offense, 311 in the air and 222 on the ground. It was just the 14th time in history Clemson had 300 yards passing and 200 yards rushing in the same game. Clemson is now 75-0-1 when gaining at least 500 yards of total offense in a game and 68-0-1 when gaining at least 200 yards yards passing in the same game. That Watson kid? Ho-hum, just another where he completed 18-22 passes for 194 yards and two scores. That computes to a passing efficiency rating of 185.9, just off of Watson’s average of 188.6 last year as a freshman when he led the nation among quarterbacks with at least 125 attempts. Preseason All-ACC receivers Artavis Scott

Wayne Gallman
RS So. Running Back
#9 6-1, 210
Loganville, GA
View Full Profile led the team in rushing with 14 carries for 92 yards and two scores.

*Outsiders want the defense to be bad. It won’t be. The Tigers led 35-0 before Wofford picked up a first down, and only a special teams fumble late in the first half allowed Wofford to score a touchdown. Otherwise, it was a dominating effort. T.J. Green

T.J. Green
Jr. Safety
#15 6-3, 203
Sylacauga, AL
View Full Profile led the way with a career high 13 tackles, including a career best 2.5 tackles for loss. The safety did a terrific job in terms of run support against the Wofford option, as did Jayron Kearse

Make no mistake, this Mountaineer team is dangerous. They have playmakers on both sides of the ball, an excellent coaching staff and they will have the motivation to come into Death Valley and pull the upset. If the Tigers are indeed caught looking ahead to Louisville, they might find themselves trailing in a big hurry.

Dabo Swinney
Head Coach
View Full Profile has pulled Clemson past the days of playing down to the competition, and this program has done a fantastic job of embracing Swinney’s “one game at a time” mantra. Watson looked sharp last week, and he will be even better this week. The Mountaineers will make the Tigers work for everything, but they simply don’t have the depth to stay with Clemson’s offense, and Clemson’s defense will make life difficult for Lamb. We really didn’t get a chance to see how Shaq Lawson

Kevin Dodd
RS Jr. Defensive End
#98 6-5, 268
Taylors, SC
View Full Profile would do in pass rushing situations last week, but they will get that chance this week.

It’s a tussle early, but Clemson pulls away.