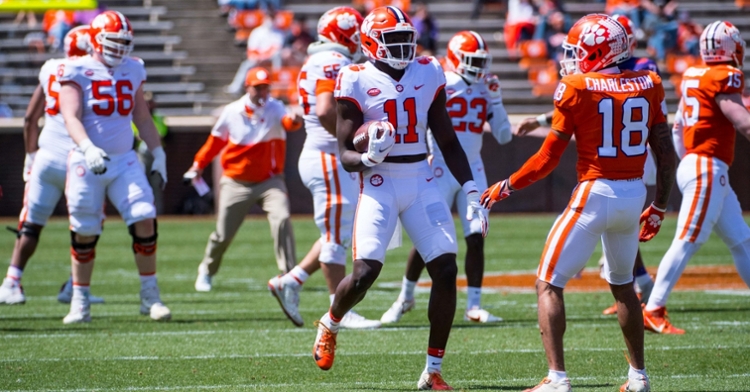 Ajou was one of the standouts in the spring game

It’s just a scrimmage, but after three-plus months without Clemson football, I found myself unreasonably excited to watch and analyze every detail of Clemson’s spring game. It’s always dangerous to read too much into small sample sizes, but layered upon Coach Swinney’s comments throughout spring practice and after the game, I left with a few takeaways.

Through three quarters, QB Taisun Phommachanh struggled as the White team had 6 punts, an interception, and a missed field goal. They trailed 0-13. Then on their last two drives, Phommachanh threw for 108 of his 163 passing yards and led the White team back. Right before their eventual go-ahead TD, he went down with an injury which we now know is likely a torn Achilles.

This elevates walk-on Hunter Helms (who actually looked quite good in limited opportunities last season) to the second-string QB behind DJ Uiagalelei. Some have suggested that this is the time for Clemson to look to the transfer portal, but I’m not sure I see them bringing in a backup. Coach Swinney sounded confident in who they have:

“We signed two so we’ve got Bubba [Chandler] and Will Taylor coming in here. They’re freshmen, but you got those guys and then we’ve got Billy Wiles who is a Division I guy who turned down several D1 schools to come compete here so we’ll have five or six guys. Heck I think just two years ago I had Will Spiers as our fourth-team quarterback and Hunter Renfrow as our third-team quarterback.”

The Tigers offensive line has been a focus this offseason after struggling at points a year ago. There’s been a lot of positive news coming out of spring camp about center Hunter Rayburn so I kept an eye on him and right guard Will Putnam. There were a handful of penalties on their White Team O-line and I noted Rayburn was tagged with at least one of them. Nonetheless, I thought they held up well and was encouraged. Marcus Tate played well on the Orange O-line and drew rave reviews from Coach Swinney after the game:

“He’s one of those guys who looks like he’s been here for a year or so. We’re really excited about Marcus. He’s going to help our team. He’s easily a guy that’s in our two-deep right now. And he’s earned that. He’s versatile. He can play left tackle, guard, right tackle. He can play four positions for us.”

If the offensive line can make major improvements from last year, the offense could improve despite losing Trevor Lawrence, Travis Etienne, and their top two wide receivers. Spring camp and Coach Swinney’s comments have lent optimism to this being the case.

It’s tough to take too much away from a D-line going against a split O-line, but it seemed like Clemson has developed some depth behind the starters, and Swinney was upbeat about their progress:

“Xavier Thomas, I thought had a very good day. We have a lot of guys that we know what they can do, but I was super excited to see Capehart out there, I was excited to see Tre get a big sack in a situation. I thought Ruke Ohorhoro was dominant today.”

The versatile linebacker/safety led the team with 3.5 sacks. Swinney said he is “lightyears ahead of where he was this time last year.” It showed and he is poised to be a major contributor in a sort of super-utility role. That’s an exciting development for this defense.

With Justyn Ross and Frank Ladson not playing, I had highlighted the Collins Towers and Joseph Ngata to keep tabs on. Beaux Collins opened the scoring with a TD and finished with 2 receptions on 2 targets for 19 yards. Dacari Collins also had 2 catches on 2 targets tallying 48 yards. Joseph Ngata showed what he can do when he is healthy. He finished with 6 receptions for 83 yards to lead the Orange team. Uiagalelei gave him a chance on a deep throw-in one-on-one coverage and he went up and got it for 49 yards. It was exactly the kind of jump ball play that great receivers win so it was encouraging to see that upside. He had a big drop at the end of the game, but his upside was on display for most of the day. He just needs to stay healthy.

Sophomore Ajou Ajou stole the show though. He looks like he’s taken a big step from a year ago. He reeled in 102 receiving yards to lead all players. Ajou managed to get open often and could have had an even bigger day if not for some misthrows. Although he was considered more of a raw prospect, Coach Swinney noted that he has a chance to make an impact this season:

“That’s going to be huge for his confidence and for his motivation going into the summer for what he needs to do to really help this time. Again, both of these teams are going to come together as one and it’s going to be very competitive. It’s going to come down to who can perform for us consistently day-in and day-out and he’s got a chance to do that.”

At running back, Lyn-J Dixon and Chez Mellusi are veterans ready to take on a bigger role with Etienne’s departure. Youngsters Phil Mafah and Kobe Pace lead the way on the ground in the spring game though. Pace’s 69 yards (11.5 YPC) led all rushers, but Mafah’s running ability really caught my eye. This running back corps may be the deepest group of any position.