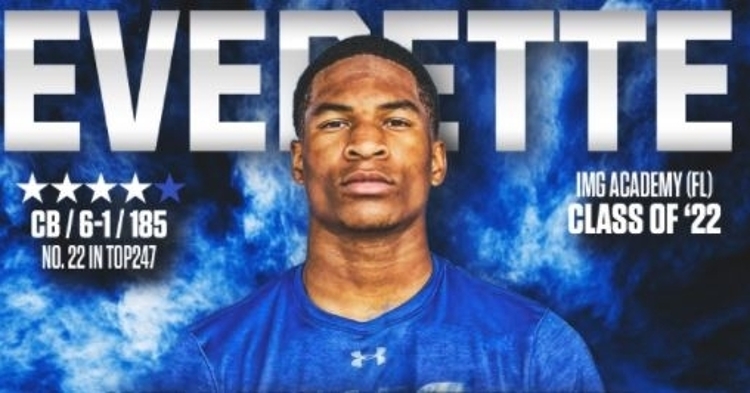 The Clemson coaching staff wanted to take five defensive backs in the 2022 recruiting class, looking to add two safeties and three cornerbacks to what is already an impressive group. Four have already given their verbal commitments, setting the stage for what might be the best group of defensive backs recruited during head coach Dabo Swinney’s tenure.

It’s amazing what recruiting looks like when the coaches are able to host prospects on campus.

Priority targets for the coaches were 4-star safety Sherrod Covil out of Chesapeake (VA) Oscar Smith, who committed to the Tigers on June 17; 4-star cornerback Toriano Pride of St. Louis (MO) Lutheran North, who committed on June 18; 4-star safety/athlete Keon Sabb of Bradenton (FL) IMG, who committed to the Tigers Saturday; and 4-star cornerback Daylen Everette of Bradenton (FL) IMG, who followed Sabb’s commitment with one of his own (and a now-famous hat toss) an hour later.

That leaves one spot open – a cornerback – with Mauldin (SC) 4-star Jeadyn Lukus favored by many to be the next domino to fall.

The unknown is what makes this class so important. At this point, it doesn’t appear that any of the safeties are on the radar of the NFL, but one good season could change that. Competition could cause someone to leave via the transfer portal, leaving an opening. At corner, it isn’t out of the realm of possibility to see either Goodrich or Booth leave for the NFL, and with the influx of talent (and the transfer portal providing a safety net), it wouldn’t be surprising to see another leave. That is why the need for at least two safeties and three corners (at the minimum).

If Lukus were to announce for the Tigers – and he’s expected to announce before his senior season and is also expected to be at the All In Cookout – it would give the Clemson coaches a tremendous haul for those two position groups.

The Tigers did sign six defensive backs in the 2019 recruiting class, but just three of those were considered to be of the blue-chip variety – Sheridan Jones, Andrew Booth, and Joseph Charleston. The other three were Lannden Zanders, Jalyn Phillips, and Ray Thornton. All six have played with Booth logging 400 career snaps, Jones has 440 snaps, Zanders has 506 snaps, Charleston has 596 snaps, Phillips has 196 snaps and Ray Thornton has 161 snaps.

It will be interesting to watch over the next few weeks to see if the Tigers can finish out the defensive backs on a high note, and over the next few years to see how this class performs. I will say this – Sabb is impressive and is one of those players I can truly see taking on the role of an Isaiah Simmons, while Everette is one of those longer corners who loves to play physical at the point of attack and can make an impression early.

Clemson recruiting is starting to hit a hot streak, and it might get even hotter in the near future.