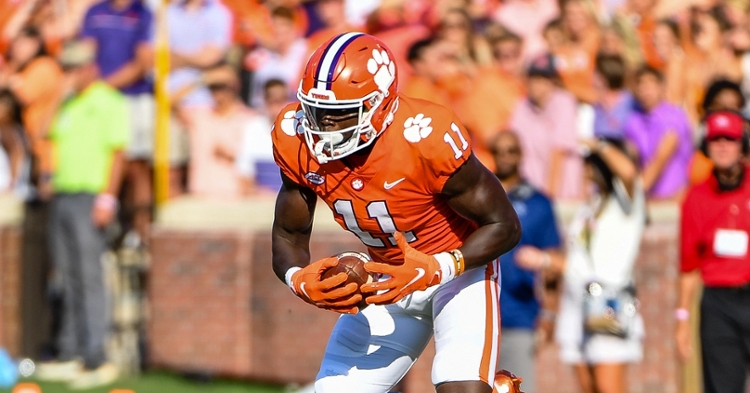 Ajou made his first career start with his most-ever snaps last week.

Clemson wide receiver Ajou Ajou made his first career start last Friday in New York, and in one game he matched his career catch total with two catches in the Tigers 17-14 win over Syracuse in the Carrier Dome.

Ajou, who many said was going to be a breakout player coming out of fall camp, has had a slow start to the season, but with injuries in the wide receiver room, he is seeing his name called now to step up and make plays for Clemson.

The Canadian native recorded two receptions in the win for 19 yards, including a huge catch on third down to extend the touchdown scoring drive in the first half.

“This season is going great, I just had to wait for my opportunity,” Ajou said. “I had an opportunity to start last weekend, and I couldn’t ask for much more. I just have to capitalize now. I was so nervous about getting the start, but it was great though. I feel like I filled the shoes pretty good though.”

It’s no secret that the Clemson offense has struggled so far this season. Having to replace first-round draft picks Trevor Lawrence and Travis Etienne has really left the offense searching for an identity halfway through the season. Ajou believes this week against Pitt up at Heinz Field is when the offense breaks through and has the breakout performance Clemson fans have been waiting for.

“I’m telling y’all that this weekend will be it,” Ajou said when asked about the offense putting it together and finally clicking. “I believe it, we’re very close. You’ve seen it all season, the games that are one score and it comes down to one or two plays. We all have to buy in and we all have to do our jobs.”

It’s not only the players who believe the offense is close to putting it together, but also the coaches who have the same feeling heading into a tough road game at Pitt.

“They’re telling us ‘everybody do your job,’” Ajou said. “No mental errors and you have to play for the dude beside you. We have to execute and do what we do, and hopefully, all 11 guys can execute at the same time.”

With the offense not living up to the standard set by recent teams, the players have heard it all from the fans. Ajou said it’s important for them to stay loose and not try to play “too perfect.”

“I was trying to play too perfect the whole first quarter last week,” Ajou said. “I finally settled in and said if you make a mistake -- you make a mistake. It’s about going out there and having fun and doing what we love. I had to take it back a few years, where I was playing for the love of the game, and when you messed up, it was short-term memory. Around the second quarter, I told myself to just chill and relax and do what I love."

The same message applies when it comes to Ajou’s position coach, Tyler Grisham. Grisham is entering his second season as the wide receivers coach at Clemson and has a lot of talent in his position group, but he is still trying to get it all to fit together.