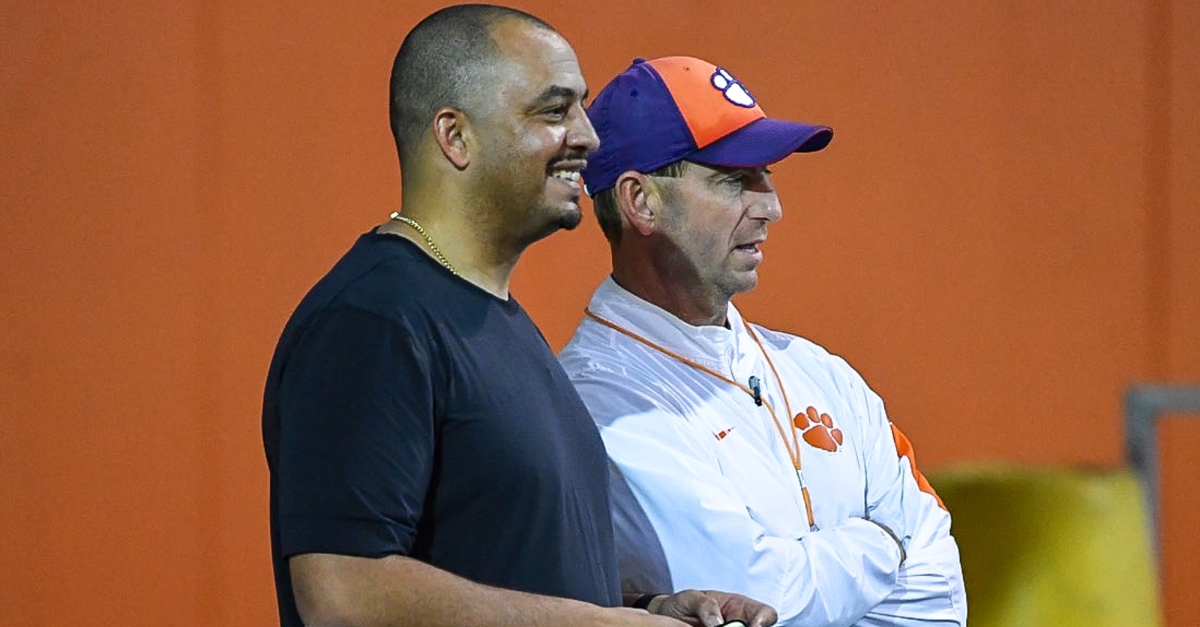 Swinney and Elliott talk prior to practice.

CLEMSON – What could be better than Christmas carols and a driving rain providing an impromptu drumbeat on the roof while watching football practice?

Clemson continued to practice ahead of the Cheez-It Bowl against Iowa St., spending two hours inside the Poe Indoor Facility Saturday afternoon. We have plenty of team-related nuggets to pass along.

*Former offensive coordinator and current Virginia head coach Tony Elliott was a visitor at practice. Elliott spent several minutes in conversation with coach Dabo Swinney in the end zone prior to the start of practice. As Clemson football SID Ross Taylor quipped, 1/7th of the head coaches in the ACC were present.

*Will Brown started out at punt return, with Will Shipley and Drew Swinney taking second and third team reps there. During the kickoff return portion we watched, Shipley had one impressive return (they aren’t tackling, it was just how fast he turned upfield), but Andrew Mukuba also took a few reps at return and looked fantastic.

*It looks like linebacker LaVonta Bentley is in line to start at WLB in the bowl game. Starter Baylon Spector is out.

*Christmas carols were the music of the day during the stretching portion. As is always the case, several assistant coaches and analysts and sometimes even Swinney play a game while the players finish stretching. They stand 30-40 yards out of the end zone and try to hit the crossbar. Cole Stoudt is pretty good, as is Tajh Boyd (as you would expect). 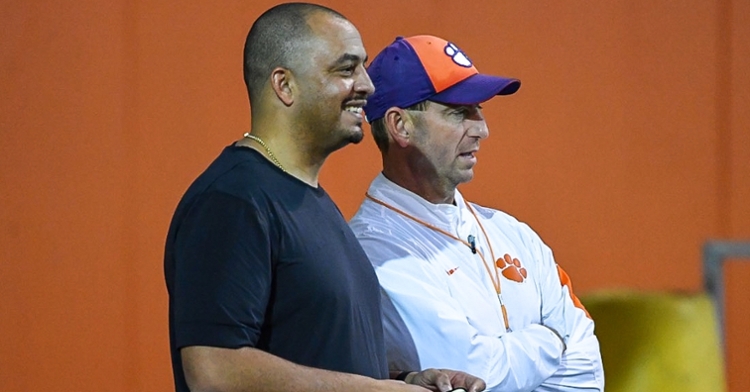 Swinney and Elliott talk prior to practice. "

*It was interesting watching the offensive line. As we know, Mason Trotter provided some stability at the center spot at the end of the season, but Hunter Rayburn has drawn first-team snaps the last few days with Trent Howard at second-team. Trotter was at left guard today, behind Marcus Tate.

*Corners Sheridan Jones and Malcolm Greene were in green, limited contact jerseys. And then early in the practice session it looked like corner Andrew Booth twisted his ankle. He got it wrapped and it didn’t look series.

*Players have changed numbers and it was, at times, hard to tell who was who. But it looks like running back Kobe Pace is wearing No. 7 now. Quarterback Taisun Phommachanh was wearing that number but transferred out.

*The three starters at wide receiver were Beaux Collins, Dacari Collins, and EJ Williams. Williams isn’t wearing a cast on his hand and looks healthy.

*Water the bamboo. There is a graphic that’s been on the scoreboard the last two days that shows a Tiger walking through bamboo. The graphic says “Water the Bamboo.” I asked about it and was told that it was there because of Swinney. Bamboo doesn’t grow very much at first, but if you keep watering it, it will eventually sprout as much as 90 feet in 60 days. Swinney says players like Cornell Powell are great examples of bamboo – just keep tending to them and watering them and eventually they sprout.

*New defensive coordinator Wes Goodwin looked to be right in his element Saturday. I asked him about coaching linebackers, and he said (following practice) that he has worked with linebackers more than any other position group. He said he has worked with guys like Kevin Steele, Carl Torbush, and Brent Venables and feels comfortable at that spot. When I asked him what was one great takeaway from working with them, he said, "It's all about the players. You can have a great scheme but that doesn't matter if you don't have the players to carry it out."