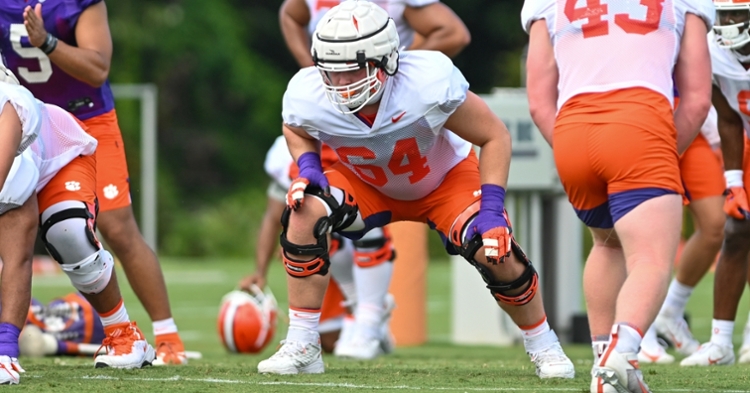 Parks is working out at both tackle spots. (Photo courtesy CUAD)

Offensive lineman Walker Parks is edgy, and he doesn’t mind showing a little bit of a mean streak when he’s on the field. So it’s no surprise when Parks answers a question with the most brutally-honest answer possible.

When I asked Parks Wednesday night about the play of the offensive line last season, Parks’ eyes lit up with an intensity usually reserved for opposing defensive linemen. His response was poignant and to the point.

“We didn’t really give our teammates a fair opportunity from our performance because as you guys see, we weren’t that dominant,” Parks told TigerNet. “So, that’s definitely something that we’ve been talking about and working on this year. It pisses me off and it pisses the other guys off, too.”

Parks was named an ESPN Freshman All-American for 2020 who enters 2021 having previously played 199 career snaps over 11 games. Parks carved out a key reserve role as a true freshman and is playing both right and left tackle this spring as offensive line coach Robbie Caldwell searches for the perfect spot for Parks’ talent.

Parks is also showing a leadership side, and he went on to talk about the struggles of the line last season and the criticism the group received.

I asked Parks if the criticism created a chip on the shoulders of the linemen, he then made a statement that he wanted the Clemson fans to hear loud and clear.

“The mindset has definitely changed. We’re working more as a unit, and right now, it’s still early. We’re still developing and learning how to communicate with this new offensive line and developing. But I promise you one thing, that’s not going to be a problem this year.”

Parks, who said he currently weighs in at around 300 pounds, said he learned a lot last season.

“Be ready whenever your time comes. That was the biggest thing for me being a backup at both of the tackle spots,” Parks said. “I had to be ready for whatever, especially with COVID going on, when somebody was going to test positive or somebody was going to get injured. So really it was knowing the playbook and working on my craft. And then knowing how fast the game is, especially on game day. Because when you get out there the adrenaline is pumping and all of those guys have been waiting for this day. That was the biggest thing for me, was learning how fast the game really is and being ready and able to react on time.”

For now he’s working at both tackle spots.

“Right now, it is kind of a battle at both tackle spots. I am working both sides, and it is wherever I perform better and I feel more comfortable,” Parks said. “It's still early and there are no set starters right now. Right now I am working back and forth at both tackles.”