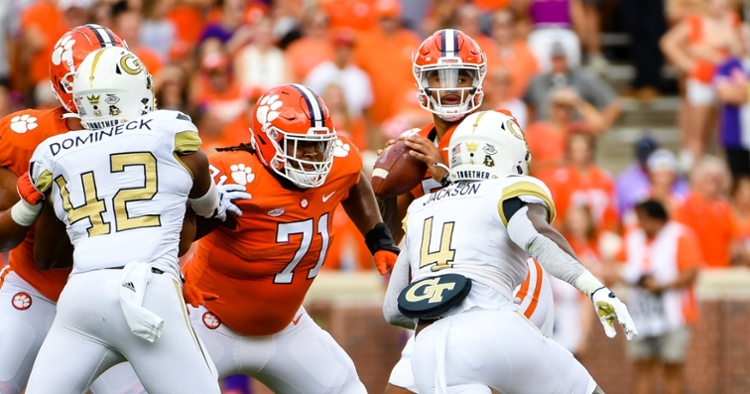 Clemson hasn't allowed a sack in the last two games, but it's a group that didn't look cohesive against Georgia Tech.

Clemson offensive lineman Jordan McFadden has been around the Tigers football program for quite some time now.

The former South Carolina lineman-of-the-year out of Dorman joined Clemson in 2018 and redshirted as the Tigers went 15-0 and captured their second National Championship in three years. McFadden started as a prominent force on the Clemson offensive line in the 2019 and 2020 campaigns, helping Travis Etienne capture the all-time ACC rushing and touchdown record en route to Clemson claiming a sixth straight ACC Championship. For his work in 2020, McFadden was named second-team all ACC by PFF with 12 starts at right tackle.

The redshirt junior has been a part of some of the best offensive lines in recent memory at Clemson, but he says this year's group is still a work in progress.

“I think the only thing we can do is go to work,” McFadden said. “We’re a work in progress, there’s some bright spots, but there’s definitely some spots where we have to improve. Watching the film, there's a lot of opportunities that we missed and shot ourselves in the foot, hindering us from going forward. We just have to focus on the detail and hone in on the little things and I think the big things will come after that.”

The Tigers lost Jackson Carman to the NFL Draft and had to shuffle some guys around that returned from where they played last year. Marcus Tate, at left guard, became just the third true freshman to start a season opener for Clemson since 1973 against Georgia. McFadden says the offensive line emphasized depth during the offseason, something they are still working on.

“The whole offseason we preached about depth, and I still think we’re building that depth,” McFadden said. “I think we’re growing as a team, we’re growing as an offense as well. We have some returners back on the offensive line, but we also have some new guys. I think we have the depth to play and I’m confident in those guys. I think they just need the experience of playing, so getting them in the game and letting them learn and grow will help a lot.”

Georgia Tech surprised Clemson last weekend, coming out in a defense they were not prepared for, the Tiger coaches indicated postgame and after video review. The Yellow Jackets dropped eight into coverage a decent amount of times, trying to force them into running the ball instead of letting DJ Uiagalelei beat them with his arm and talented speedsters on the outside. McFadden said that he expects defenses to continue to do it and gave a glimpse into what they can do to combat that.

“I definitely think a lot of defenses will try to do what Georgia Tech did,” said McFadden. “The coaches are going to give us a really great gameplan and I think our biggest thing is really just executing. It’s the small details that will help us in the long run, as well as executing and just finishing. I think as an offense we’re moving the ball pretty well, we just get down the field and stall out. Instead of stalling out, we need points and I think we’re getting to that point.”

The offensive line will have a new challenge this weekend when they travel to Raleigh, North Carolina for its first true road test of the season. The crowd at Carter-Finley Stadium is expected to be large and loud as the Wolfpack look for their first win in the Textile Bowl since 2011.

“It’s definitely going to be difficult, but at the end of the day it’s just ball,” said McFadden. “At some point you have to tune out the noise and really lock in on what’s important. The fans are supposed to root for their team and root against us. You can’t focus on what’s on the outside, you have to focus on what’s right in front of you and lock in.”

NC State (2-1) has forced four interceptions so far this season, holding opponents 72 yards on the ground per game. It won’t be an easy test for the offense on Saturday, but if the offense is to bounce back, it just might be behind the arm of Uiagalelei and the blocking of the offensive line.