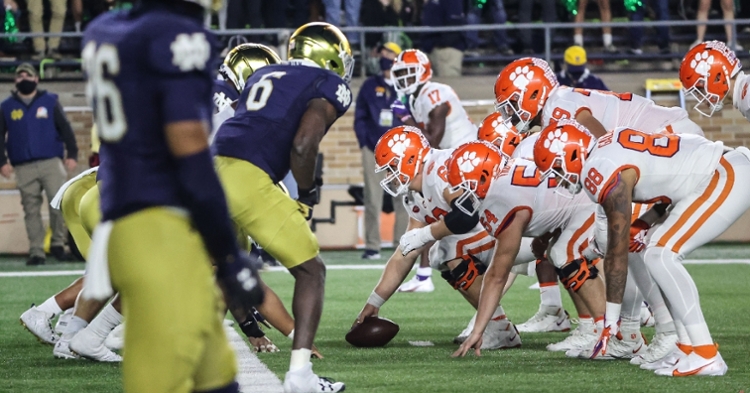 Clemson's O-line has been under the microscope this week after struggles at Notre Dame.

Replacing four starters on the offensive line was an understandable offseason focus, but the underlying issue there is a real problem through eight games according to Clemson’s head coach.

But with that experience moving up, the trends in roster makeup on the O-line have left the No. 4 Tigers with all underclassmen among the trusted options off the bench -- and that trust is still wavering at this point.

Clemson’s second-string there averaged about 20 snaps per game last season, while the listed second-team this season has seen half that -- and that’s with averaging six more plays a game in 2020 (78 vs. 72).

Compound things with the struggles creating movement upfront featured once again in the 47-40 double OT loss at Notre Dame -- and a useful bye week could be as vital as ever in trying to find a midseason solution.

“That’s one of our issues right now,” Dabo Swinney said of their O-line depth earlier this week, “to be quite frank with you, in the past years we have been playing a lot of guys on the OL and we’re just really young (now) and just don’t have the depth there right now in a game like that. That’s one of the things we have to spend the time with the young guys this week. We love the guys we have.

“We just have got a gap from a knowledge standpoint. (The starters) are playing a lot more plays than we normally play with that group and hopefully we develop as we go.”

Swinney didn’t use those issues as an excuse for the performance at Notre Dame, where he acknowledged his group was “just beat” as the Irish bottled up the run game. The starting right guard Putnam said he was disappointed they couldn’t move the line like they wanted to and was thankful to have the bye week to work on the issues surrounding technique, hand placement and building knowledge.

“As a group, obviously we did better in the techniques and were a little more proficient in the pass blocking than we were in the run blocking,” he said, “but it's good that we have the bye week and have extra time to work and hone in on our skills.”

True freshman Walker Parks and redshirt freshman Mason Trotter were two backups who played double-digit snaps at Notre Dame and Swinney is eager to see them and more Tiger linemen down the depth chart grow into bigger roles this season.

“For Walker and for Trotter to get some really quality experience in a critical situation -- and do a nice job -- bodes well,” he said. “Our pass protection was awesome (at Notre Dame). I mean awesome, until right there at the end in the second overtime and we gave up our first sack. Should have thrown away the ball on the first one but gave up our first sack the whole game (on the OL). I was really pleased with our pass pro. Did a really nice job with that against a really good front.

Clemson’s remaining scheduled opponents run the gamut on effectiveness against the run, with two among the worst in Florida State (91st; 200 YPG; and now down All-ACC DT Marvin Wilson) and Virginia Tech (97th; 202.86) and another leading the Power 5 (Pitt, 78.6 YPG).

Putnam promises the O-line will work to improve down the stretch in response to whatever challenges come up.

“We've always been a very tight-knit group,” Putnam said. “And whenever we practice, everyone gets reps throughout the week when we practice. We've always been a tight-knit group win or lose and I don't think that's ever going to change for us. And we're always looking to improve, whether we win by a lot or we lose -- we're always looking to improve on every aspect of our game.”