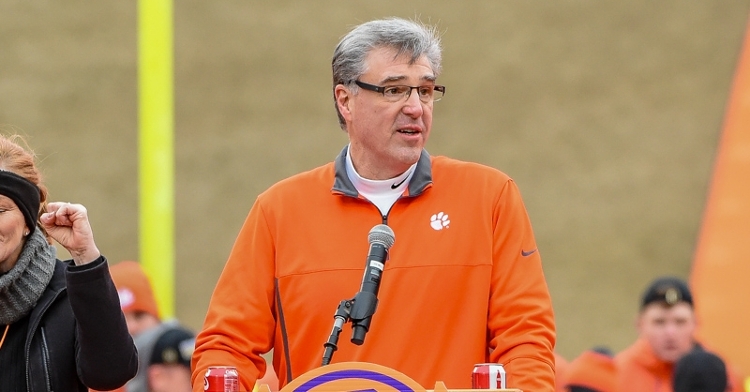 Oh, how I long for the days of spending a peaceful Friday attending a press conference with Dabo Swinney and an opposing coach at Bank of America Stadium, previewing the next day’s ACC Championship Game. And for game day itself, where the biggest question was how many points the Tigers would score.

It’s been a weird week around these parts, as I’ve written more than once.

You have the situation at Oklahoma and the flirtation from Sooner fans and the like with Clemson defensive coordinator Brent Venables, which then turned into a full-blown lust for Swinney (as one person put it to me Friday, next thing you know those folks will be claiming Danny Ford is coming in as their offensive line coach). There has been news of players transferring out this week, causing even more consternation among the orange-clad faithful.

And then the bombshell dropped – reports linking Clemson athletic director Dan Radakovich to the University of Miami and its open athletic director role. The more I worked the phones and the more I spoke with people not only around Clemson but also around the country, it looked like the smoke was leading to a roaring fire. I exchanged an email with Radakovich late Friday in which he declared that “Nothing is done….premature.” A few seconds later I was told by someone on an athletic staff that Radakovich was letting staffers know his intentions of heading for Miami.

We are going to have a lot more on this later as we realize some clarity in the situation, but a popular question on social media Friday night was, “Why? Why would he leave Clemson for Miami?”

A couple of thoughts there. No. 1, he loves a challenge, and Miami is definitely a challenge. A football stadium nowhere close to campus, coaching uncertainty, the seeming over-involvement of a fairly large Board of Trustees, and other factors make Miami a challenge. Add in a bunch of former athletes – especially in football – who are used to winning at a certain level and are willing to throw cash at the problem, and you have a challenge of epic proportions in place. And, as a bonus for those who like it, you get to do it in sunny South Florida.

Add in the reported $3 million salary and you have another big reason.

And then there is the situation where Radakovich was considered a prime candidate for ACC Commissioner, a job that opened when John Swofford announced his retirement. I was told more than once by people in the know at the ACC that Radakovich was a popular pick and there was some sentiment that he was a leader for the job. And then Jim Phillips was hired away from Northwestern. Radakovich was mentioned as someone who might be a fit for the Commissioner of the PAC-12, but that also never materialized.

I had a source tell me late Friday that Radakovich has been unhappy since things changed with the ACC. Why? Maybe we will never know. But it all goes back to the next challenge, and if this is what he has decided to do, it’s definitely a challenge.

So what’s next? I am sure that Graham Neff, the Deputy Director of Athletics, will get a long look. Someone at Clemson said that when this job opened last time, the phone never stopped ringing with qualified candidates wanting the job. And with the success Clemson has had, this job will be wanted by ADs all over the country. They will be lined up out the door.

So that is where we stand. And yes, we would all rather be in Charlotte having fun, but times are changing. And that is why this hire might be more important in many ways than the Swinney hire over a decade ago. Some people will want to continue with the good old boy network, but with college athletics changing daily, the successful programs will understand that they have to be bold, be willing to adapt, leave their comfort zone and be ready to think outside the box. This job will require that plus someone who understands transfer portals, NIL (Name, image and likeness third-party compensation), and network deals. It’s about more than hiring and firing coaches these days.