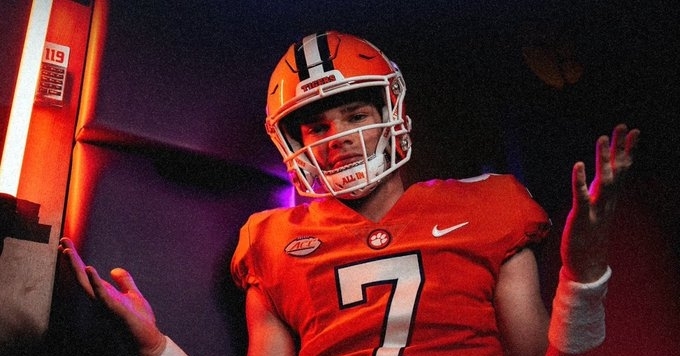 5-star QB Christopher Vizzina said this class has a chance to be special.

Clemson quarterback commit Christopher Vizzina feels like he speaks for the rest of his peers when he says the Tigers’ 2023 recruiting class is chasing National Championships instead of NIL (Name/Image/Likeness) money, and that’s just one of the reasons he knows this class will be special.

The 5-star out of Birmingham (AL) Briarwood committed to Clemson a few days after the spring game in April, and at the time he was the second commit for the 2023 cycle. The first commit, Nathaniel Joseph, has since moved on but Vizzina has plenty of company – the Tigers now have a dozen commits and stand to gain even more in the coming weeks.

An official visit weekend during the first few days of June has paid dividends, but not even Vizzina saw things going as well as they are.

“I knew it was going to be a great class but honestly I didn't really think we were going to have this many commits in one month,” Vizzina said. “I always expected the official visit to go good and everything but that official visit was so special. Obviously, you can tell that a lot of people liked it. Yes, I expected us to have a great class but I didn’t expect us to have this many right now at this point.”

Vizzina said that weekend resonated for many reasons.

“It's really hard to explain. It was just fun from the beginning. It was never like awkward or anything or anything like that,” he said. “I think there were just enough guys and I think we all just had some connections to each other and it just was never weird, so it just felt like we were having fun with everybody and everybody was included. It was just a great time getting to talk to all the coaches and obviously I got to put my recruiting cap on - because I've been there so many times I don't really need to see anything, but just showing other people around. It was easy to connect with everybody so I think that really stuck with a lot of people.”

A group chat set up by the Clemson staff set the stage for the great weekend.

“The beginning of the whole thing was when they made a group chat before the visit. We were all headed up there, either driving or flying, and they made a group chat just kind of like telling us what we were going to be doing that night,” Vizzina said. “We got there and we just started texting and nobody really expected it to be off the group text that everybody was texting on, but we probably just clicked before we even met each other. Like we all met each other just by that group chat so when we got there we kind of had something to talk about just because people were just being funny in the group chat and stuff like that.

“That's kind of what made it not so weird or awkward, because some visits it’s awkward at first because you’re with a bunch of guys you know of but never met. But because of that group chat we were hitting the ground running.”

Vizzina said there is a new group chat of the current commits, and they’ve added players they think they can bring on board. He says that is an impressive list and will make this class one of the best.

“I think it's going to be super special,” he said. “I don't really care about the rankings or anything, but I think it really should make Clemson fans excited that we're top three right now and we're going to keep climbing, so it's just going to get better. I know that. So, it's going to be a lot of fun. It's really not going to stop.”

I told Vizzina that it seems like this class is special without the promises of big NIL paydays, and he said that what he’s trying to accomplish goes beyond a check.

“Absolutely. I've seen some stuff from some other programs. Like on their official visits, they're bringing out Lamborghinis and airplanes and that's kind of their selling point,” he said. “That doesn't have anything to do with football or have anything to do with what you're going to go to school to do. And so, when you go on this visit to Clemson and they don't talk about NIL until the last day, you kind of see what the priorities are there. And so, I think that matched with a lot of the guys and everyone that’s committed, and it shows the priorities. It matches all of our priorities.

“It feels like a no-brainer, especially to people's parents. And I think NIL is going to be a great thing, but it's also going to come with some consequences. And I don't want to put too much trust or emphasis on it because it's not fully built and it's not fully trusted yet. But obviously, if I wanted to go somewhere that cared a lot about NIL or was all about NIL, I wouldn’t have chosen Clemson. I want to win a National Championship. I want to enjoy being in college and being around great people. So, I decided to go to Clemson.”