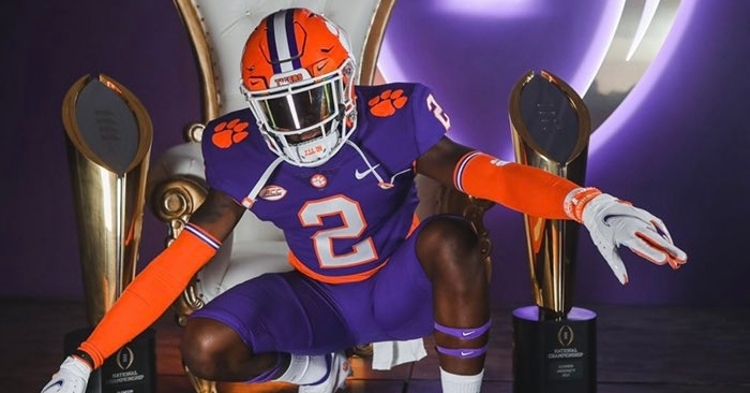 Covil poses for a photo during the All In Cookout.

Sherrod Covil committed to Clemson on June 17th, and the 4-star safety was back in Clemson for the All In Cookout on Sunday. Since his commitment, Clemson has added other pieces to the 2022 class, and Covil is working to make sure that the Tigers aren’t finished bringing in elite talent on the recruiting trail.

The All In Cookout was a chance for Covil to catch up with other Clemson commits and targets for the ’22 class, and Covil said the class is pushing each other to be great on and off the field.

“The brotherhood we’re building -- just being around guys that want to carry on the tradition of champions,” Covil told TigerNet of his highlights from the All In Cookout. “Everybody knows it’s not easy at Clemson, but I can’t wait to get there and get to work! We want our class to be special, so we’re pushing each other to be great. Not just at Clemson, but for our high school teams, and to be pillars in our community! Clemson is just different.”

Clemson hosted two major targets for the defense in the ’22 class, with Jeadyn Lukus and Travis Shaw in attendance for the annual event. Covil delivered his own recruiting pitch to both prospects, and his message involved winning championships for the Tigers.

“That’s all I’m going to talk to them about. I’m going to tell them every day until they commit,” Covil said of his message of chasing titles with Lukus and Shaw. “Just imagine us pushing each other every day to obtain greatness! We want to be a part of the best defense Clemson has ever had. We won’t be happy just making it there! We want it all and we need them to be all in with us!”

Clemson has been successful pulling elite recruits from Virginia, and Covil adds to that tradition by way of Chesapeake (VA) Oscar Smith HS. Clemson hosted another 4-star from Virginia on Sunday with wide receiver Andre Greene Jr. in town, and Covil is also helping to recruit the 6-3 receiver for the Clemson offense.

“I’m not letting him commit anywhere without a fight,” Covil said of Greene Jr. “He’s a big dog and we are all trying to make sure he knows where home is! He’s from Virginia so you know I’m going extra hard. Clemson shows you Clemson, not any other school, and I just want to convey that to him. We are the talk of other schools. And once you are a part of it, you understand why.”

The Clemson football program speaks for itself on the field, but Covil’s love for Clemson goes much deeper than just football.

“It’s not about football when you visit Clemson, it’s about the people,” he said. “Nothing to sell, just good people. You know it’s a top-3 program and the best football is guaranteed, so they hardly mention football. You fall in love with the people knowing if football isn’t there, you’ll still be okay.”

What will be Covil’s goal for himself and the ’22 class upon arrival at Clemson?

“Just to come in and get to work,” he said. “I just want to learn the defense and compete. Four (national championships) would be great.”