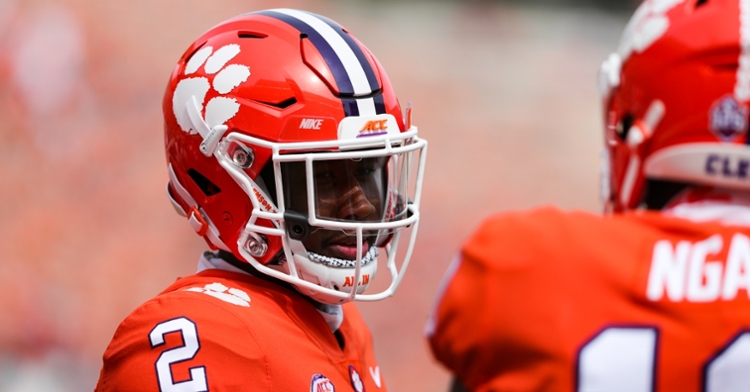 Frank Ladson should be a big part of the offense in 2021.

Clemson finished 10th in total offense (502 yards per game) and sixth in passing offense (349 YPG) last season. Now, they must replace QB Trevor Lawrence, but after DJ Uiagalelei’s two-game trial by fire, replacing the all-time great Tiger QB seems less daunting. Over at tight end, the Tigers bring back both Braden Galloway and Davis Allen and look to be the strongest they’ve been at the position since Jordan Leggett departed.

There will be a changing of the guard at both wide receiver and running back with a lot still to be sorted out in camp. That’s where we’ll take a very early look and try to size up two of the Tigers' most interesting positions for 2021.

Clemson loses seniors Amari Rodgers and Cornell Powell, both coming off breakout years. Nevertheless, there’s reason to believe the WR play will get better in 2021. Justyn Ross returns for his fourth season after missing last year following spinal surgery. He had 1,865 receiving yards and 17 TDs as a freshman and sophomore.

Rising juniors Joseph Ngata and Frank Ladson received a lot of offseason buzz before last season, but injuries and COVID quarantines kept them out of practices and games. The duo combined for just 26 receptions but could be primed for a post-hype breakout.

With Ngata and Ladson sidelined for much of the year, true freshman EJ Williams got extra opportunities and looked like a budding star. More specifically, he looked a lot like fellow Phenix City, Alabama product Justyn Ross. He finished fifth on the team in receiving yards (third among WRs) and really came on late in the year.

The Tigers also have Brannon Spector entering his third year. He is a slot receiver and wears the beloved No. 13 jersey. He reeled in 16 catches for 136 yards last season. Ajou Ajou is a 6-3, 215-pound Canadian who only had two receptions last year but has tremendous athletic upside. A big step forward from either of these two wouldn’t be surprising.

Finally, you supplement all that with several talented freshmen from the latest recruiting class. Dacari Collins, Beaux Collins (DJ Uiagalelei’s former high school teammate), and Troy Stellato are all 247Sports four-star prospects and provide the room with immense depth and upside.

Despite losing their two most-productive wide receivers from 2020, with a little better injury luck, the Tigers should be stronger in the receiver corps this coming season.

Clemson fans have to say goodbye to Travis Etienne, one of the school’s greatest athletes ever, but get to welcome back another all-time great, CJ Spiller, who was named running backs coach. With the Tigers' two leading rushers – Etienne and Lawrence – departing, Clemson only returns 38% of its rushing yards from last season. Despite that, Spiller’s running back room could be very deep.

Lyn-J Dixon (190 yards) and Chez Mellusi (151 yards) headline the returnees. They figure to be favorites to earn the bulk of the carries early on. Sophomore Kobe Pace and junior Mikey Dukes will push them for snaps. Darien Rencher, who utilized the NCAA blanket COVID-19 waiver, provides depth and leadership. That quintet is supplemented by two blue chip prospects: Will Shipley, a five-star all-purpose back from suburban Charlotte and Phil Mafah, a four-star RB from suburban Atlanta. Shipley could help replace some of the 588 receiving yards Travis Etienne racked up last year. Pass blocking always plays a major role in determining who earns snaps and could be the deciding factor with so many players in the mix.

Much of the success for these running backs will depend on improvement from the offensive line in front of them. Provided there’s improvement there, the 2021 running backs group could end up looking a bit like 2017 when four different running backs topped 200 yards (only Etienne did so last season). It will be fun to see new players given big opportunities and watch how the competition for carries unfolds. The Tigers may have lost an all-time great, but a deep running back corps will help fill the void.