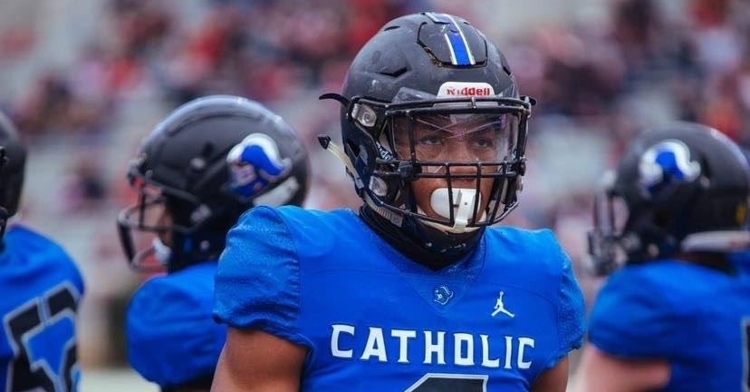 Dudley is a 4-star linebacker.

Two big potential pieces of the 2022 recruiting class will be on Clemson’s campus next weekend when the Tigers host teammates out of Alabama.

Kylon Griffin (6-1 180) is a 3-star 2022 safety and TJ Dudley (6-2 210) is a 4-star 2022 linebacker out of Montgomery (AL) Montgomery Catholic Preparatory. Griffin originally was committed to Mississippi State and Dudley to Oregon. Both decommitted in December.

Clemson needs to address the safety and linebacker positions after losing commitments at those spots following the departure of Brent Venables to Oklahoma. The Tigers just recently offered Griffin. They had previously offered Dudley and was among his favorites when he announced for the Ducks in June.

Griffin has seen his recruiting pick up since going back on the market, and getting the Clemson offer no doubt raised his profile nationally. And it wasn’t an offer he was expecting when the call came from safeties coach Mickey Conn.

“There isn’t much history. We’ve been texting and talking,” Griffin said. “They just kind of came in the picture thankfully. And of course, Clemson being Clemson, I wanted it. It’s huge, it’s really big. Clemson has always one of those top teams with a great bar set and great standards. I hope to meet that standard. I love everything about them, so they are really in the top two or three with Nebraska and USC (Southern Cal).”

Griffin said Conn has expressed a lot of interest in him and sees a good place for him in the secondary.

“He said he loves my film and he sees me in the nickel spot probably,” Griffin said. “He said I’m long, rangy and a great tackler, and overall a great player. Of course, I think there’s room for improvement. This year I played corner. I’d go back to safety a few games, but most of the time I was at corner. I don’t know how they are looking at that, but I can definitely be the deep man or be the box-type player.”

Griffin said he and Dudley are not a package deal, though they’ve talked about playing for the same school. But he’s not sure what’s on his teammate’s mind at this point.

“Honestly I don’t know,” Griffin said. “Of course, if he’s taking an official visit, they must be pretty high on his list, too. We joke around about going to the same school, and sometimes it might turn real serious.”

Griffin also has an official visit to Nebraska set for January 21st, and he said he might set up a visit to Southern Cal as well if he doesn’t make a decision after these first two visits.