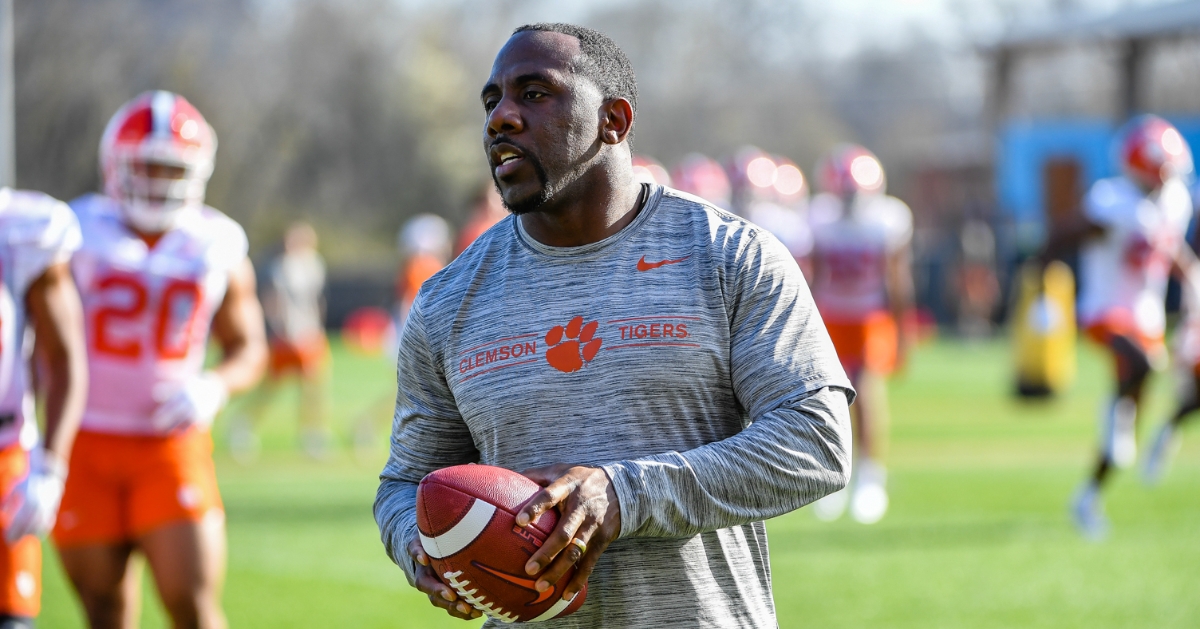 CJ Spiller is ready to get to work with his four scholarship backs and entire group.

CLEMSON – Running backs coach CJ Spiller heads into fall camp with three known commodities and one unknown, but that one unknown has him full of excitement.

Spiller spoke with the media last week at the Tigers’ media day, and he briefly touched on his three known players in Will Shipley, Phil Mafah, and Kobe Pace and true freshman Keith Adams, Jr.

Spiller was asked about how the running game might look under new offensive coordinator Brandon Streeter.

"To be determined. I can't really give you all the juice,” Spiller said with a smile. “I mean, biggest thing is just everybody getting on the same page and all speaking the same language."

Spiller is counting on Shipley to be the leader of the group.

"Just picking up where he left off honestly. He's got natural leadership skills,” Spiller said of Shipley. “He's very vocal. He does a great job of elevating everyone else's play around him. That's what you want."

Mafah was the lone scholarship running back this past spring as Pace and Shipley recovered from off-season surgery, something he used to his advantage.

"He was very prepared and took advantage of his opportunity with the other guys out. He's going to have a big year,” Spiller said.

Adams is a Clemson and NFL legacy – he is the son of Clemson Hall of Famer Keith Adams, a two-time All-America linebacker who won 1999 ACC Defensive Player of the Year and still holds Clemson single-season records for tackles, tackles for loss and sacks. He is the grandson of Julius Adams, a second-round pick in the 1971 NFL Draft who played 16 seasons with the New England Patriots and earned a Pro Bowl appearance in 1980.

Adams finished his high school career in Utah, and he earned first-team all-state and all-region honors in 2021 after rushing for 1,376 yards and 22 touchdowns on 219 carries as a senior. He also added 217 yards and a touchdown on 17 receptions as he helped Pine View to a UHSAA/Mountain America state semifinal appearance, upsetting two higher-seeded teams (including the state’s top seed) en route to the final four.

“I think he’s gonna be good for our room,” Spiller said of Adams. “He comes in wide open and eager to learn. Very hungry. I think he’s gonna add some competition. This is a kid that’s self-motivated, so it doesn’t take a lot to motivate him. I’m excited to get to work with him. He’s a great kid off the field. That makes the fit even better in our room. He’s coming in there and asking all the right questions.”

Adams has already been learning from the older players.

“He wants to know from those older guys, which have already been in the system. Kobe (Pace) is the oldest in there now, and Will (Shipley) has only been here two years, but he’s asking all the right questions,” Spiller said. “Those guys have done a great job taking him up under their wing. As a coach, you kind of sit back and try to watch that stuff. As a player, I know how it was coming in as a freshman. Who is gonna take who under their wing and show them the way? They’re away from home for the first time. They’re having to go through strength training. They’re having to adjust to college life. You want to have someone who is gonna take you up under their wing and show you the way to make that transition as smooth as possible.”