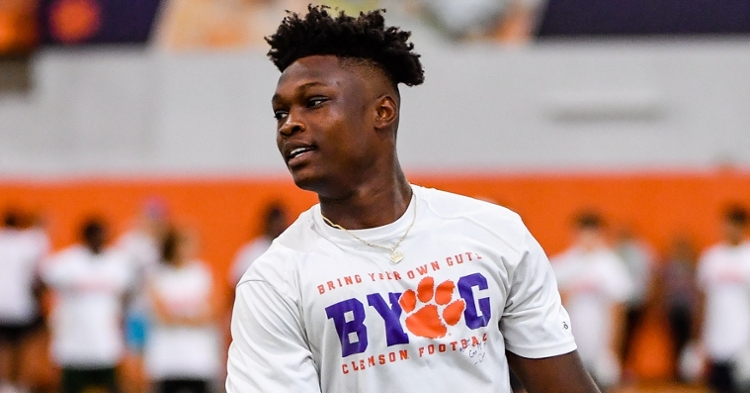 Randall said competing in The Opening was one of his goals.

Adam Randall committed to Clemson on Christmas Day in 2020, but it was Christmas in July for the future Tiger when he competed in The Opening Finals in Manhattan Beach, California, last weekend. Competing at The Opening has been a dream of Randall’s for years.

Randall, the 2022 wide receiver prospect out of Myrtle Beach (SC), was able to spend time with quarterback commit Cade Klubnik and Clemson targets Oscar Delp and Trevor Etienne also. All in all, it was everything Randall wanted.

“It was a great experience. My father and I got to go to the west coast and to California. I've never been there before,” Randall said. “It was a good experience to be able to go to L.A. and go compete with the highest level of high school athletes that are out there right now. Just me being in that number was a very good experience for me. I was really excited to go compete with them, and just being at the camp. It was one of those camps that I've had circled on my list for a long time, and I was glad that I was able to compete in it.”

Randall was on the Royal 7-on-7 team with Delp, Klubnik, and Etienne, that won the championship.

“The highlight was winning The Opening Tournament championship and just us being able to come together as a team and us meeting each other 48 hours prior and being able to come together and feel like a family at the end of it,” he said. “It was a really neat experience for us. Being able to play with Cade, Oscar Delp and Trevor Etienne was a very good experience because they could be at Clemson one day if they make their decision. It was a good experience for me and I got to win my first championship with Cade and it was at The Opening.”

Randall said Klubnik has all the tools to be a great quarterback.

“He's a great quarterback and he's going to be able to win all the games. He can do anything on the field as a quarterback,” Randall said. “Also, a part of that is he's a great leader. He's able to lead a football team and I can definitely see him being able to lead us to any place that the team wants to go. Him showing me that means a lot. I already know he's a great guy on and off the field, so him being a leader and his talent on the field speaks from his play. I was really excited to see that and I am grateful that he will be my teammate here soon.”

He then said that he tried to push Clemson on Delp and Etienne as much as he dared.

“Ultimately, you want them to make the best decision for themselves because that's where they want to go, but you just try to put a little bit of persuasion on them and throw little things in there to see what they say and how they're feeling,” Randall said. “You try to say little things but you don't want to put too much pressure on them because that's when the recruiting process becomes un-fun.”

How does he feel like he did playing with the nation’s best?

“I really felt like I could hold my own going up against guys like that. Just proving to myself who I really am and that I am who people say I am was a lot for me,” Randall said. “I felt like I held my own to go out there with those types of guys and be able to do me and be myself.”

Randall will attend the All In Cookout later this month and then return home to prepare for his senior season.

“I'm really excited. This is my last ride. I've been out there since the sixth grade running around as a little kid,” he said. “I can't believe it's the last time that I'll be able to suit up in a Myrtle Beach uniform. I can't wait until we go to Carolina Forest for the first game. It's going to be a packed house, so I can't for that and to see fans for the first time and to be with my guys again and play in front of my family and friends on that stage for the last couple of times that I can.”