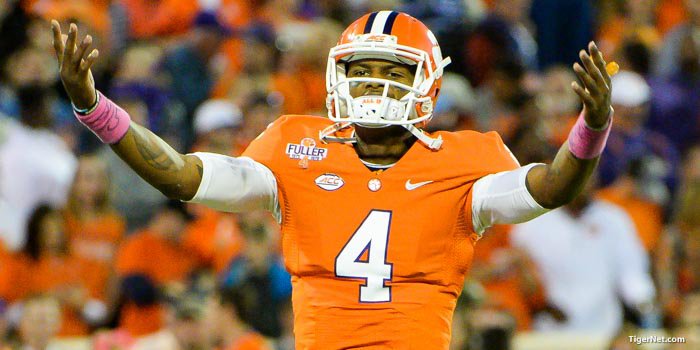 CHARLOTTE, NC – The eyes of the nation will be on Charlotte and the ACC Championship game between North Carolina and Clemson Saturday night. Can the Tigers keep their eye on the prize?

The Tigers and Tar Heels square off in Bank of America Stadium Saturday, and for Clemson a win means not only a conference championship but a spot in the College Football Playoff. It’s all on the line with everyone watching.

It should be fun and probably won’t lack for excitement. And….will turnovers cost Clemson a spot in the College Football Playoff? We will know all of the answers by midnight Saturday.

*The ACC Championship game will be the 100th game for Dabo Swinney as Clemson’s head coach. He became the interim head coach on October 13, 2008 and was given the job without the interim title on December 1, 2008. Swinney has a 73-26 record for his first 99 games. When he defeated South Carolina he moved into third place on Clemson’s career coaching victories list. He moved ahead of his predecessor Tommy Bowden, who had 72 wins and 45 losses in his nine plus years as head coach. It is interesting to note that if Swinney and the Tigers defeat North Carolina it will give Swinney a 74-26 record for his first 100 games. Danny Ford was 72-24-4 for his first 100 games. Both would have a .740 winning percentage at the 100 game mark.

But, Clemson and North Carolina played each other last year, a 50-35 Clemson win in Clemson.

Clemson first played in the ACC Championship game in 2009 and Georgia Tech defeated Clemson, 39-34. Both teams rushed for over 300 yards in the game, the only FBS game in 2009 in which both teams had at least 300 yards rushing. Neither team punted in the game, the only game in Clemson history that has been the case. C.J. Spiller rushed for 233 yards in 20 attempts, scored four touchdowns, and had 301 all-purpose running yards. Those are both ACC Championship game records, two of six records that Spiller still holds. He was named the game’s MVP, the only time someone from the losing team has been so honored.

Clemson won the title two years later with a 38-10 win over Virginia Tech. Virginia Tech was ranked third in the USA Today poll entering the game and it is still tied for the highest ranked team Clemson has beaten in its history. Tajh Boyd had three touchdown passes and one rushing to account for four of Clemson’s five touchdowns on the night, as the Tigers boasted a balanced attach that had 217 yards rushing and 240 passing.

WHEN UNC HAS THE BALL

North Carolina’s offense starts with quarterback Marquise Williams, who is 186-288 for (64.6%) for 2,605 yards, 18 touchdowns and eight interceptions. He is second on the team in rushing with 124 attempts for 786 yards and another 10 scores, making him one of the top dual-threat playmakers in the country. Running back Elijah Hood leads the team in rushing with 192 attempts for 1280 yards (6.67 yards per carry average) and 16 rushing touchdowns. T.J. Logan is another big-time threat in the backfield, (60-372) and is sometimes used in a two-back set with Hood. At wide receiver, Mack Hollins (26-670), Quinshad Davis (46-505), Ryan Switzer (49-627) and Bug Howard (25-435) make up one of the most productive receiving quartets in the country.

The Heels average 41.3 points per game for a reason.

Defensively, Clemson still has good numbers overall but has struggled in recent weeks, and that includes last week against a really bad South Carolina team. It was obvious to anyone that watched that linebacker Ben Boulware is playing with one arm and a whole lot of guts. If he can’t perform effectively, will the Tigers have to turn to the untested Jalen Williams?

Clemson will try to stop the running game with the front four, and probably won’t take as many chances with the blitz as last week when a couple of mistimed blitzes cost them big plays. Clemson might even play in the nickel or even dime package depending on how many receivers the Heels use, and look for Mackensie Alexander to spend time in the slot covering Ryan Switzer while Cordrea Tankersley and Adrian Baker concentrate on Davis and Hollins.

The Heels will score points on a tired Clemson defense, but this defense has risen to the occasion when it has to. Will they make enough stops Saturday? Kevin Dodd and Shaq Lawson have to get pressure from the outside, and Christian Wilkins, Scott Pagano, Carlos Watkins and D.J. Reader have to seal off the inside without help from blitzers.

North Carolina has seen quite a transformation on defense under first-year defensive coordinator Gene Chizik, who was one of 34 candidates for the Broyles Award, which goes to the top assistant coach in the country. Last season, the Tar Heels allowed a school-record 497.8 yards per game and 39.0 points per game. This year, Carolina is allowing 394.9 yards per game and is 19th in the country at 20.8 points per game.

Clemson’s offense – like North Carolina’s – starts at quarterback. That means Deshaun Watson, who has been terrific all season. Watson is the only player in the nation with at least 750 yards rushing and 3,000 yards passing; 3rd in nation in completion percentage at .704 (261-371); posted five straight games with at least 380 yards of total offense, a first in Clemson history; averaged 414 yards of total offense per game in November, second in the nation. Breaks down to 93 yards a game rushing and 321 per game passing. He has 27 touchdowns passing and nine touchdowns rushing for 36 total in 12 games.

Receiver Deon Cain is coming off a season-best five catches for 96 yards and a touchdown at South Carolina. The TD catch went for a 55-yard score from Watson, his fourth touchdown catch of at least 30 yards this year and his sixth reception of at least 38 yards.

Running back Wayne Gallman had 102 yards rushing in the win at South Carolina and has had at least 100 yards rushing in seven of his last nine games. He has averaged 108 yards on the ground in that time and has scored a touchdown in four of his last five games, and he told the media this week that he is close to 100 percent after suffering an ankle injury against Syracuse. If Clemson can hold the football, control the clock on UNC’s porous run defense, it can take pressure off of Clemson’s defense.

However, I look for tight end Jordan Leggett to have a big game. The Heels simply don’t have anyone that matches up with his skillset.

Clemson – as we know – has struggled in the return game (on both sides) but has gotten consistency from field goal kicker Greg Huegel, who is now 21-23 overall on field goals and a perfect 17-17 in ACC play. The Tigers have punted efficiently, but don’t expect a lot of long punts that flip the field.

I said a week ago that if the Tigers played turnover-free they would defeat South Carolina with ease. If they didn’t, they would struggle to put away the Gamecocks. They struggled with three turnovers, and with both offenses possessing the ability to score points in bunches turnovers are once again the key. South Carolina didn’t have enough punch to take advantage of those turnovers, but UNC does and if the Tigers lose the turnover battle they lose a chance at the playoff.

I think this group is focused, however, and they’ve had some experience at playing in big-games while North Carolina doesn’t. It’s a shootout early, with plenty of big plays, but Clemson has something North Carolina doesn’t – Deshaun Watson. Williams will turn it over if pressured, and he will be pressured Saturday night.