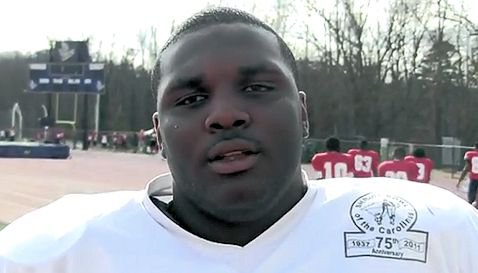 D.J. Reader
Offensive Line
6-4, 330
Greensboro, NC
View Full Profile has faced several of Clemson’s top commitments and prospects this week during practice for this Saturday’s Shrine Bowl, and he has come away impressed both with their playing abilities and recruiting abilities.

Reader is the 6-3, 305-pound lineman out of Greensboro (NC) Grimsley who has trimmed his list of college choices to Clemson, North Carolina and Maryland. The 3-star prospect will play defensive line on the collegiate level, but is playing offensive line this week at the Shrine Bowl.

As a result, he is getting to see many of North Carolina’s top prospects from a different perspective than many of the recruiting “analysts” on hand this week – they are coming straight at him.

Jonathan Bullard
Defensive Line
6-4, 250
Shelby, NC
View Full Profile is probably the best player out here,” Reader told TigerNet Thursday before practice started at Spartanburg High School. “There are a lot of great skill players out here, but he might be one of the best. But when you talk about being a great athlete and combining that playing very, very physical – that is Carlos Watkins

He also said that Clemson commitments like Germone Hopper

Germone Hopper
Athlete
6-0, 175
Charlotte, NC
View Full Profile have also been in his ear about choosing the Tigers.

“I have heard from him and some of the guys from South Carolina who are going to Clemson,” he said. “It is kind of weird, being recruited by my peers.”

Reader said that he originally wanted to sit down after the Shrine Bowl and make his decision, but now might take it all the way to national signing day.

“I just need to find some time to take it all in,” he said. “It has been very, very busy. There are things I like about all three schools. For Maryland, I like the excellence of the school and the chances you have there in the D.C. area. North Carolina is close to him.”