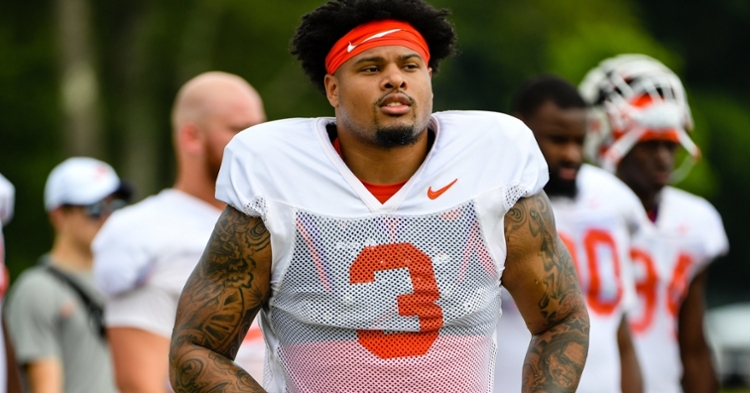 Thomas is showing what you want to see in fall camp so far.

CLEMSON – The road trip to Jervey Meadows means a day off for several veterans.

The Tigers made the trip across the moat to Jervey for Thursday morning’s practice, but head coach Dabo Swinney gave some veterans the day off. Specialists BT Potter and Will Spiers, tight end Braden Galloway, safety Nolan Turner and several others were in street clothes. Swinney mentioned Wednesday night that he intends to give the older players time off during camp so the staff can see the younger players in action.

Here are a few notes from our abbreviated viewing session:

*There were nine or 10 NFL scouts in attendance, a big number for the sixth practice of fall camp. As one observer put it, everybody is itching to get out and work and see the world after what happened last season. Woody McCorvey tracked down Potter and brought him over to a group of four scouts and made introductions.

*Offensive lineman Dietrick Pennington was in a walking boot and not practicing. Doesn’t appear to be serious.

*Linebacker Jake Venables and defensive end Cade Denhoff were in yellow jerseys, while wide receivers Stellato and Beaux Collins were upgraded to green jerseys. Stellato and Collins were taking part in all the drills we watched.

*I’ve heard that the quarterbacks have been dialed in the last few days, and it was fun watching quarterbacks coach Brandon Streeter run his guys through their drills. DJ Uiagalelei was on point today, while it’s fun to watch freshman Will Taylor. Taisun Phommachanh continues to impress with his progress, and he was moving around great today.

I know a lot of people have preconceived notions about Hunter Helms, but Dabo Swinney laughed about those Wednesday night when he reminded us that some dude named Hunter Renfrow was also a walk-on. It’s obvious, if you just take the time to watch Helms throw, that he can do the job. In fact, if you didn’t know his story and simply walked out there and saw him, you would likely have a different opinion.

He is also showing leadership to the group of young quarterbacks and helps the younger players go through drills while also concentrating on his own work. One observer told me that has watched every practice told me Helms is having a “more than solid” camp.

*I was watching Bryan Bresee run through drills and a former player told me Bresee reminds him of Tiger great Michael Dean Perry (that’s the third time someone has said that since camp started). He then told me that during one practice, Perry was so disruptive that head coach Danny Ford told him, “We can’t get anything done with you out here” and threw him out of practice. Perry happily ambled off the practice, found his car and waved and honked at his teammates as he drove off. Not sure Swinney is ready to toss Bresee out of practice, but he’s a wrecking ball.

*After the team ended practice Wednesday night, most of the team headed indoors for the cold tubs and food. Ajou Ajou stayed outside to work 1-on-1 with Artavis Scott on running routes, a common occurrence from what we’ve seen. Will Swinney is always staying after practice and working with the quarterbacks, and there are others you see who simply can’t get enough of the field.

But defensive end Xavier Thomas left the field and immediately went to work in the weight room. It’s the little things you notice that clue you in on a player’s mindset, and Thursday was no different. Thomas was sprinting from drill to drill and as engaged as I’ve ever seen him. I don’t know who is going to start at the defensive end spot, but a healthy and focused Thomas with Myles Murphy, Bresee, and Tyler Davis has to be a scary thought for opposing offenses.

Report: Former Clemson coach expected to be next head coach for JSU
Post your comments!