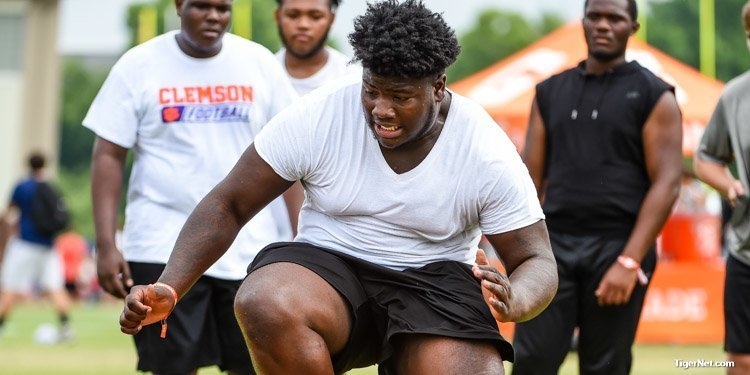 Alexander works out in the morning session

The camp started early Wednesday morning under cloudy skies, but the clouds couldn’t hide some of the big names that were in attendance.

That includes 2021 4-star defensive back David Daniel of Woodstock (GA), who received star treatment (a golf cart ride) on his way into camp. Daniel has been a frequent visitor to the Clemson campus, and Wednesday’s camp showing marks the third time he’s been on campus in the last few months, including the spring game.

He has offers from Alabama, Florida, Florida State, Georgia, LSU, Miami, Michigan, Notre Dame, Oklahoma, South Carolina and Tennessee among others (but not Clemson). Daniel also visited Clemson for the spring game in April.

Cane Berrong, the No. 1 tight end in the 2021 class who has also visited Clemson recently, will work out in the afternoon session.

*A huge visitor, and we do mean huge, was Dallas (TX) Skyline 2022 DT Keithan (Bear) Alexander. Alexander is one of those guys that will be known nationally in another year, and he already boasts offers from schools like Florida and Texas A&M, Texas, and Texas Tech. His teammate, 2021 safety Isaiah Nwokobia, who has offers from Utah State, Kansas and Illinois State, worked out with Mickey Conn’s group.

*Defensive coordinator Brent Venables and corners coach Mike Reed spent a good bit of time in conversation with Hollywood (FL) McArthur 2020 Jerrold Pough. Venables prefers to spend his time coaching the linebackers, so the fact that he spent time with Pough is notable.

*A group of 40-plus players from McDonough (GA) Eagles Landing showed up for the morning workout, including 2020 4-star wide receiver Justin Robinson, a Georgia commit.

*Tony Elliott has a bigger group of running backs today, including Lilburn (GA) Parkview 2021 4-star prospect Cody Brown. Brown is explosive and has great feet. He has offer list that includes Auburn, LSU, Georgia, and Tennessee.

*Clemson OL commit Walker Parks is a perfect example of why Swinney’s camp is important and why in many ways the star rankings don’t matter when it comes to prospects the coaches offer. Parks camped at Clemson last year (as a 3-star) and it was that visit that set the stage for his commitment. He’s now a 4-star, but it was the coaches who saw something in him last year (not a sportswriter at a camp) that led to his current status. He was a spectator yesterday but worked out this morning. 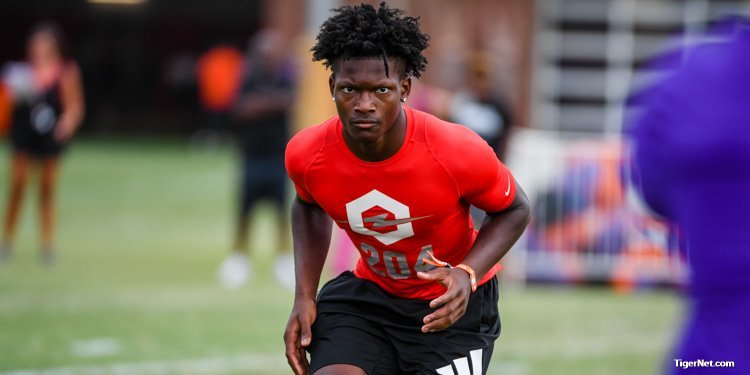 He’s as good as advertised.

*A Clemson legacy worked out with the wide receivers this morning before suffering a minor lower leg injury. Jackson Fields is a 2022 wide prospect out of the state of Texas who is the son of former Clemson player Stacy Fields. Stacy Fields has coached the last few years, but with his son now a prospect, he can’t coach under new NCAA rules.

Joining Fields in watching the activities was former Alabama defensive tackle Michael Myers. Myers played for four teams over several seasons. He was a player at Alabama when Swinney was a grad assistant.

We will have PLENTY more after what promises to be an action-packed afternoon session.