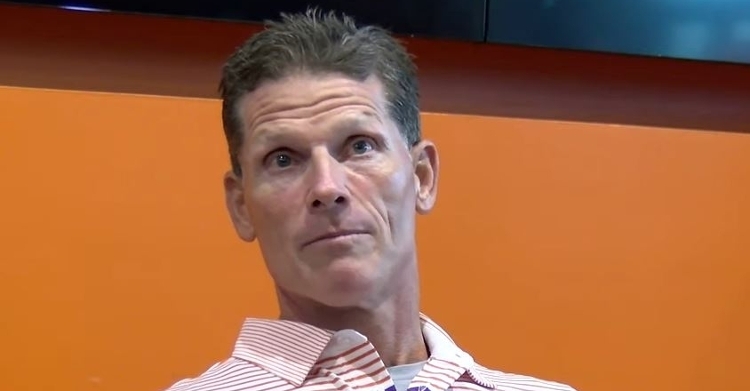 Venables says his defense has a lot of talent in 2021.

CLEMSON – Clemson defensive coordinator Brent Venables brings back a wealth of experience and talent this season, but the best thing his players have are the scars and bruises from where his players were “cut up” at times during the 2020 season.

Venables, speaking to the media last week, said he is excited about starting fall camp in the near future with a “great-looking” group.

“We are excited about this year. We have a great-looking team coming back. We have 20-plus starters on defense - guys that started games a year ago, which is an all-time high for us,” Venables said. “We have tremendous experience coming back for us. We have a few spots where we have a little more depth than others. But we have leadership, and we had a great winter, spring, and summer, and now we're just anxious to get back out on the field.”

The defense also has players who have battle scars.

“We have a bunch of young guys that played last year and grew up,” Venables said. “They have some scars and some bumps and bruises and got cut up a little bit, and I feel like we have a chance to have a great football team and a really strong defense.”

The defense spent the winter, spring, and summer working on being more physical after being dominated by Ohio State in the College Football Playoff.

“That was an area that we really feel needed focus and a concerted effort to get better and improve,” Venables said. “Physicality is a mindset. So whether that is weight room improvement that makes you more physical in the trenches or on the second and third levels, we have to get better and become a more physical defense. That has certainly been a point of emphasis for us since the end of the season.

“Anytime you have a tremendous failure, you can let it destroy you, define you, or develop you. I have always used failure - and I've had plenty of it - to develop. You learn from it and you grow from it, through the strain and the pain, and that is where you get better. You don't get better by being comfortable and having all of this success. There has to be some failure, with some moments bigger than others that are very humbling and disappointing. We got whupped. We got whupped really good. But we've gotten better through that adversity and that failure.”

He was asked if this year’s defense has comparable talent to the decorated group that won a National Championship in 2018.

"I think the talent is comparable, but talent doesn't win for you," Venables said. "What I loved about the '18 group is that they proved through the course of their careers, but especially that year, they showed up every single day. Like, every day, not just most times. No, every day. That's a very hard thing to do. That is how they defined themselves. The ’14 group, you could never satisfy those guys. Coach Swinney had to drag those guys off the field. It's easy to be present. To show up with passion, intensity and toughness, with the edge, that's another conversation. That's what the best of the best do. So we will see if have the maturity if we have the edge.

"I'm saying I don't know. We're talented. I'm excited. We're getting ready to start that next phase. They've not played a single game yet. That's a lot of starts and experience. Experience doesn't mean you're going to be better, but it certainly helps."