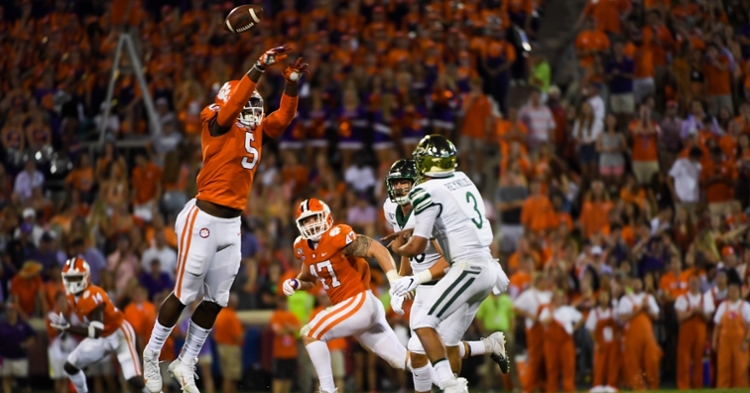 KJ Henry goes up after an early Charlotte pass.

CLEMSON – It was difficult to keep up with everyone defensive coordinator Brent Venables was running onto the field Saturday night, even for Clemson’s PA announcer who mistakenly credited Venables with a tackle, instead of his son Jake.

While Jake might not have appreciated that part of it, the elder Venables enjoyed being able to reward so many players for their hard work throughout the week.

Clemson essentially emptied its bench of all eligible players in allowing 111 players to participate and for Venables, he relished seeing guys who normally wouldn’t have the opportunity to get on the field be able to gain game experience.

“That was great. That was a lot of fun to watch those guys get out there. You've got to give an opportunity,” Venables said after Clemson’s 52-10 win over Charlotte Saturday night. “A few of them probably won't have a lot of opportunities so it was great to reward them. Those guys work every bit as hard - the backups, the third team, the walk-ons, the scout team guys. They all deserve that opportunity. They work and grind as hard as anybody in the program, so it is neat to be able to have an opportunity to reward them.”

Venables said both players and coaches gain confidence from the in-game experience.

“I think it's all the same. Different ways but in many ways the same because those guys are grinding all the time,” Venables said. “They'd probably surprise you a little bit in their ability to go out and execute and make plays. It's a great opportunity for them and it gives you confidence, too, as a coach. Obviously, it develops them, and it develops depth. It gives both them and the coaches confidence when they go out and execute.”

Most of the true freshmen saw the field Saturday evening and Venables said many of them caught his attention.

“There are a bunch of them. Some young backers got in there and did well - Spec (Baylon Spector), Jake (Venables), Mike Jones. Kane (Patterson) and Keith (Maguire) got in there,” he said.” Vonta (Bentley), Jalyn Phillips, Lannden Zanders, Andrew Booth - it was fun to watch him get out there - Sheridan (Jones). A bunch of the d-line got in there. We're young everywhere at d-line. There aren't really any veterans up there. That was a lot of fun. There aren't many programs around the country that are going to play 111 guys in a game, so that was neat to be a part of.”

After playing so many guys, Venables said there should be an uptick in the number of players showing up for film study next week.

“It will be the first time all year for them showing up to film study on their own,” he said. “They want to come see themselves. It will be a lot of fun going through the tape with the guys and watching those guys get around and make some plays.”