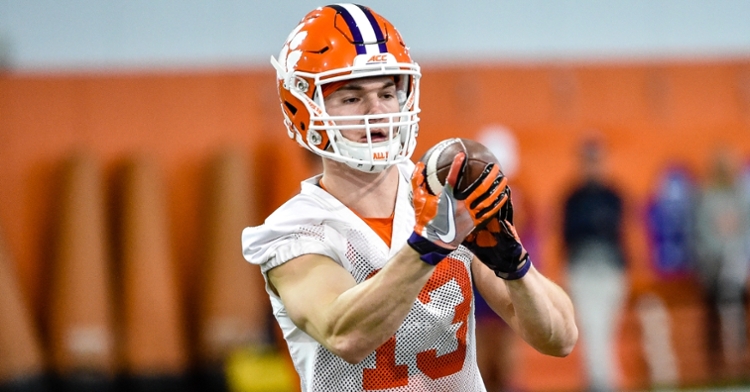 Spector asked for the No. 13 jersey.

With the No. 13 come high expectations and a lot of comparisons to those who have come before you, but Brannon Spector isn’t shying away from the spotlight.

When Clemson fans see the No. 13 line up at wide receiver, they immediately think of Tyler Grisham – who is now the Tigers’ wide receivers coach – Adam Humphries and, of course, Hunter Renfrow.

When Spector came to Clemson in 2019, he specifically requested the No. 13 hoping to become the next-in-line of great slot receivers.

“I did request it because I felt like it would be awesome,” Spector told the media after Monday’s practice. “There have been three guys who have been the slot receiver and I came here thinking that I was going to play the slot, too, so I was like, 'Hey man, maybe this will work out and I can continue on to be the next No. 13 slot receiver.'

“As far as Humphries, Coach Grish and Renfrow, it's awesome just to carry on. Not like to necessarily play their game but all three of them were great receivers and I'm just here to keep that standard high.”

Offensive coordinator Tony Elliott likened Spector to Renfrow, who is now with the Las Vegas Raiders.

“That's an awesome compliment,” Spector said of the comparison. “I feel honored to have that said about me. I'm just trying to be me. I would love to play similar to Renfrow, but I'm just going to play my game.”

The Calhoun (GA) native sees a little bit of Renfrow and little bit of Humphries – who is with the Tennessee Titans – in his game.

“It's a mixture of Humphries and Renfrow,” he said. “Humphries was tough, and I feel like I have some of that in me and then with Renfrow's quickness, I feel like I'm very quick off the line and quick in and out of my breaks.”

The redshirt freshman wideout appreciates the comparisons to those who came before him, but at the end of the day, he wants to make his own mark and leave his own legacy as Clemson’s No. 13.

“There’s not really any pressure (that comes with wearing No. 13),” he said. “I'm playing my game. When I first came here, I felt a little bit of pressure just because of what the previous guys have done but lately, I've just let it go and I'm playing me and I'm being Brannon.”