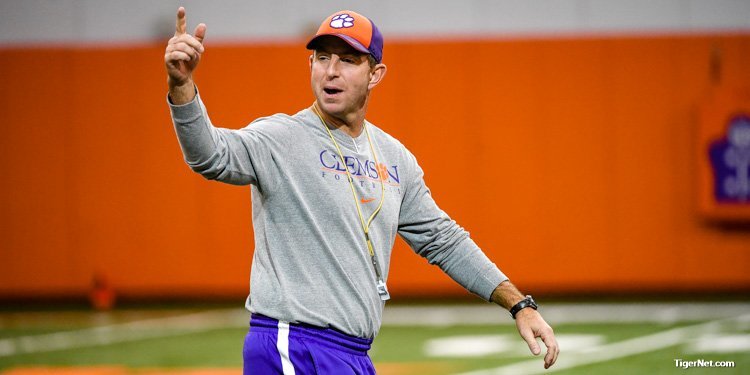 CLEMSON – Much like the Wednesday start of bowl practice, Friday's third practice started off with cheery holiday tunes. Once the music was turned off, however, the holiday cheery turned to grim determination.

No. 2 Clemson held its third bowl practice Friday – forced to move indoors because of the rain – and there was a different quality to it than Wednesday’s “glad to be back” approach.

Coaches started out barking at players, and it continued through the entire session the media was allowed to watch. Any player not running from area to area was subjected to the typical and necessary angry coach yelling, and the student trainers were running from group to group with plenty of water.

The indoor facility actually felt a little warmer than normal (making them sweat?) and the one coach in the middle of the intensity was offensive line coach Robbie Caldwell. Caldwell put his group through drills, and no player did it right the first time. Caldwell was in rare form as he pushed the group.

Even Tony Elliott was pushing – at one point running down the field with the kickoff team screaming - and then coaching once the play was over.

Yep, just one of those typical rainy days when the coaches strive to get a little extra out of the players.

*There weren’t many visitors present, but former linebacker Corico Wright was on hand. Wright currently works with the cornerbacks at James Madison University. The Dukes lost 23-20 to Colgate in the second round of the playoffs and are currently looking for a new head coach.

*Corner Mario Goodrich was in a yellow non-contact jersey. Tackle Mitch Hyatt was a full participant after being in a yellow jersey on Wednesday.

*Whatever injury sidelined Tre Lamar during the South Carolina game didn’t show up against Pitt in the ACC Championship Game, and it’s certainly not evident during the early bowl practices. He looks fantastic and is moving with ease.

Another linebacker we watched was redshirt freshman Mike Jones. Jones is quick – especially laterally – and will be counted on next season with the loss of Kendall Joseph, the Davis twins, and possibly Lamar.

*Will Spiers’ punts were ricocheting off the ceiling Friday, so the coaches had him throw the football instead of punt it. Spiers, who played quarterback in high school, has a cannon for an arm. His first throw, without warming up, traveled almost 70 yards. When Kelly Bryant left the team, Spiers was mentioned as a player who could get reps at quarterback. No doubt about it, he has a great arm.

*I love taking a few minutes to watch the quarterbacks, and one of those reasons is Trevor Lawrence. But every time I see Chase Brice I am reminded how fortunate Clemson is to have Brice. Not only because of the comeback win over Syracuse, but the kid can flat out play. I need to go back and look at the stats, but it seems like every time he played the Tigers scored (unless it was a kneel down to run out the clock). In Charlotte, as we were watching the team warm up before the ACC Championship Game, two AFC scouts watching the quarterbacks spent as much time talking about Brice as they did Lawrence.

One turned to the other and said, “Man, 7 can spin it. He’s a good-looking kid.”

One that would start at a majority of programs around the country.

*Ok, the practice has been cut short and we have Coach Swinney in a few minutes. More to come.